What Is and What Should Be: The Connection Between Practice and Performance 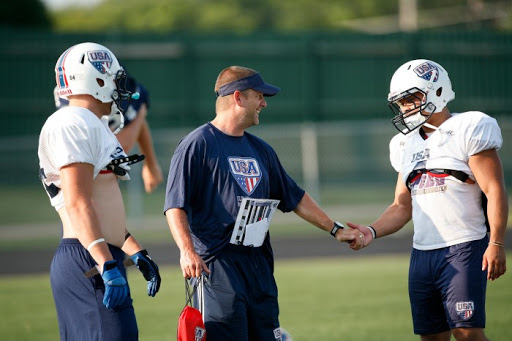 When it comes to practice and preparing our athletes for the game, there’s the way it is and the way it should be. College of William & Mary Director of High Performance Erik Korem lives in the “what should be” category.

Often, football practice serves as an opportunity for players to show that they know what to do in a given situation. Far less often are players able to show that they can do what is needed to be done under the extreme demands of the game. This is not just the case in drill work. Practice design is an area that can stand to grow as well.

USA Football’s Senior Manager of Education and Training Andy Ryland has done a lot of work in the area of drill and practice design as evidenced by his “Deliberate Practice” series with Keith Grabowski on USA Football’s Coach & Coordinator podcast. Andy has also written a lot on the Vision-Decision-Action (VDA) Cycle in American Football. These sources provide a wealth of information to help any coach as they delve into this work. At its core, VDA highlights the need for drills (outside fundamental skill building) to be dynamic so that players can also work on decision-making and processing to better prepare for the demands of the game, thus playing faster. The game is dynamic, so the drills should be dynamic.

At William & Mary, Erik Korem has spent years studying the demands of the game on players and working on a plan that allows players to be prepared for the physical, psychological, technical and tactical demands of the game. If fatigue is the enemy of performance, this is most visible on the first day of each season. In what he calls the “First-Game Conundrum,” Korem explains what is often behind the wide-eyed looks among staff and players as everyone is exhausted and unable to perform in an optimal manner. After the first game, each game after serves as the stimulus necessary for players to maintain fitness and coaches to maintain the sharpness of their eyes; however, what are teams doing to prepare for the first game? According to Korem, there’s a lot being left on the table.

Let’s start at the beginning of the season. The first week of training camp should not be an attempt to recreate any scenes from “The Junction Boys.” Output is high in the first week typically because players are rested and energy is high. Get in, learn, get out and begin introducing the demands of the game during the weeks to come. The goal is for players to be able to know they’ve been here before, wherever that may be.

If the average game lasts three hours, some practices should be that long. With warmups, game day is typically the length of the game plus an hour. Structuring a varying practice length that matches that or comes close to that can be beneficial. This is not to suggest that every practice should be 3-4 hours prior to the game, but if the goal is for players to have been here before, practice design serves as a vehicle for that.

The average length of one drive in football is six plays. Players are expected to put forth maximum effort for only six plays. After this, they typically rest for 7 to 15 minutes of real time. Rest times may vary at the high school level depending on the number of two-way players, which should also be considered when designing practice. However, if the one-way player is expected to put forth explosive effort for six plays and then rest for between 7 and 15 minutes, are we designing practices to prepare players for that? Taking an idea from Canadian Olympic sprinter and noteworthy sprint coach Charlie Francis, players shouldn’t live in medium output. The standard 4-on-4 off, 20 to 30 minute team period does not match the stress that players will be under on game day.

Many practices run in the following skeletal pattern:

There are certainly holes to be found in the plan above. However, it does create opportunities for rest periods that mirror what players will face on game day to be built into practice. Instead of running a team period for 25 minutes straight, alternating 1s and 2s, perhaps this plan promotes the opportunity to allow players to be their most explosive selves thanks to the staggered approach to team periods. Again, when games are taking place on a weekly basis, the game itself will serve as the stimulus needed to maintain fitness. This approach can be very beneficial in preparing players for the first game so that they don’t find themselves having to perform in a situation that they were last in eight or nine months ago.

These ideas stem from the work of Erik Korem. Another item that Korem rallies for is a group approach to planning practice. If practice design is left solely to the head coach, that coach has, perhaps unknowingly, just become the strength coach. When the strength coach is at the practice planning table, the chances that the whole athlete is being coached increases. In the end, we want to promote the physical, psychological, technical and tactical awareness and abilities of players. Hearing from the trusted voices that work closest with those areas can only increase output. Informed input results in better output. While the head coach certainly sets the curriculum, position coaches plan the lessons, coordinators own the units, performance coaches prepare players and inform the environment of practice, quality control coaches support the operation, etc. All parts working. All parts having ownership on the plan.

Finally, Korem stresses the point that thoughtful practice design does not simply benefit the players. Coaches thinking about where they stand during team periods – using headsets to communicate, taking measures to ensure that when they get to the first game, they’ve been there before – can only increase the strength and confidence of the staff. Former Bridgewater defensive coordinator Rob Everett often built in adjustment and communication periods to practice so that players and coaches could practice those critical skills.

Structuring practice plans that match the stresses and demands that players will face in a game is an outstanding way to increase performance and prepare for game days.