Protect the Team, Protect the Game: The Buddy Teevens Philosophy of Dartmouth Football 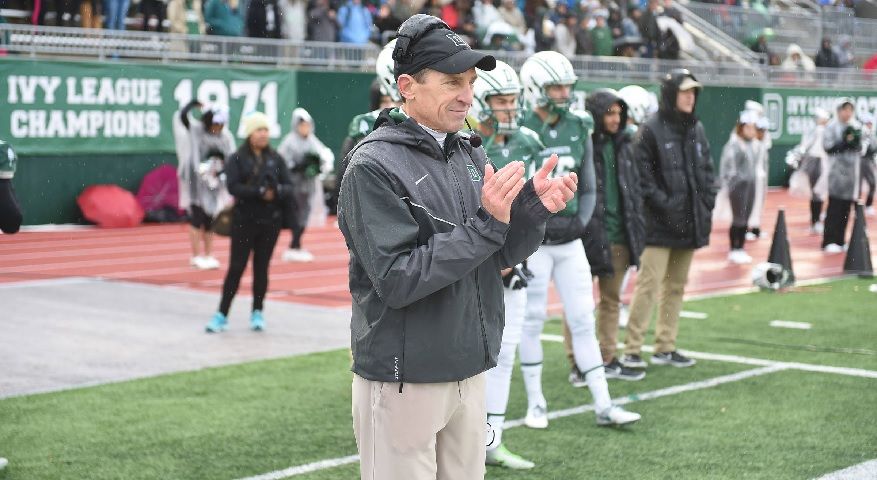 After a 0-10 season in 2008 and a 2-8 season in 2009, Dartmouth head coach Buddy Teevens assessed his football program and decided that it was time to chart a new course.

Two wins over two years might lead some coaches to believe that they need to double down on training toughness. This is often the low-lying fruit. Instead, at a staff meeting heading into the 2010 season, Coach Teevens announced that the team would not be tackling at all during spring ball. In the words of Coach Teevens, clipboards flew, eyes rolled and livelihoods, specifically defensive ones, flashed before coaches’ eyes.

Coach Teevens, like many forward thinkers, knew that the reactions of those around him, though unfavorable, were merely bumps in the journey towards positive change. After a spring without live tackling to the ground, the stage was set for a true shift in the amount of contact and the way that contact was taught and worked on for the Big Green. After five consecutive losing seasons from 2005-2009, Coach Teevens and Dartmouth football have enjoyed a decade that has included eight winning seasons and back-to-back 9-1 campaigns in 2018 and 2019.

Making an investment in the health and safety of his players served multiple purposes. Most importantly, limiting contact and thoughtfully teaching the nuances of contact sent a message to members of the Dartmouth football program. If actions speak louder than words, Coach Teevens’ approach shows players that they are at the forefront of his thinking and lets them know that they are the capital to be valued most. Additionally, Dartmouth players were able to limit hits and prevent unnecessary wear, tear and injury.

Big Green football is proof of the effectiveness of the better, safer game approach that has been a rallying cry in recent years as football undergoes an evolution. In this case, prioritizing safety has led to a more thoughtful and diligent method of teaching the skills necessary to be successful within the game. Coach Teevens argues that few teams tackle as often or as well as his team.  Where they differ is in not bringing players to the ground during practice. The result is an average of five missed tackles per game. Dartmouth defenders don’t celebrate and look for the big hits that were so popular in the media in years past. Instead, they take a precise approach to getting the ball carrier to the ground.

This philosophy does not apply solely to tackling. Many of these principles are applied to what takes place in the trenches as well. A thoughtful approach to blocking and defeating blocks has been equally beneficial. Coach Teevens utilized the phrase, “Protect the team.” This adage serves to remind players that when working against one another, while they most certainly want to hone their skills, it should not come at the cost of the health and safety of a teammate, no matter their role. Dartmouth players don’t go to ground, don’t torque one another and don’t engage in acts of extraneous aggression as they strive to protect the team. This strengthens the bond among players as well as coaches as the Big Green truly embodies a team-first culture.

An unintended byproduct of Coach Teevens’ philosophy helps protect the game. When coaches see a real example of successful, high-level football with a focus on safety, a model worth following is established. I can confidently say that in my role as high school head coach, we employ many of the strategies practiced by the Dartmouth program. Why not use bags to truly teach and practice an essential contact skill and limit the number of unnecessary hits that a player endures? While most bags are light, weighted options that simulate the force needed to bring an actual player to the ground exist. Coach Teevens even spent time with the Dartmouth School of Engineering to create a 180-pound mobile stand-up tackling bag. Ingenuity like this proves his statement, “I love the game, but I love the players more.”

Football needs more of this approach. Football needs more people like Buddy Teevens: Leaders that are willing to step away from the traditional, “This is how we’ve always done this” approach. Players need it and the game needs it. Coaches set the trends and help football develop into the new age. We all know how important this game is. When we protect the game’s most valuable asset, the players, we protect the game.