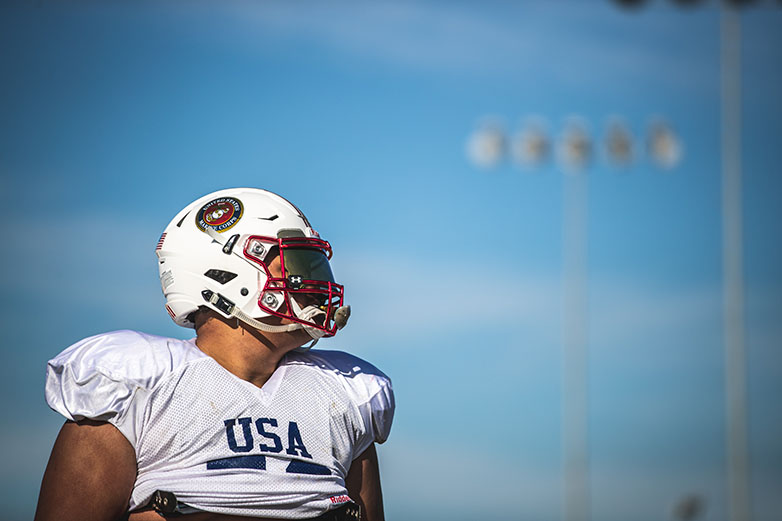 Everyone is trying to adjust to our new normal way of life. With social distancing being the order of the day for the immediate and foreseeable future, it has become imperative to find ways to adjust.

With so many hours left open during the day and realistically only so many of them you can – and should – spend watching Netflix or YouTube, it’s important to find other ways of keeping your mind occupied.

While currently on this temporary forced leave from live and televised sports, I have taken this time to indulge in my passion for nonfiction books about my favorite sport. Football has long been a sport that easily lends itself to riveting storytelling. Games are played on grand scales often by larger than life characters.

Personally, I’m an avid reader and collector. I have shamefully far too many books on my “to read” pile. As I run through those on my downtime, I thought I would share some personal favorites.

In no particular order, here is a touchdown (and an extra point) worth of books to enjoy while you are social distancing.

Life has an almost uncanny way of crafting stories that seem to be too good to be true. If you were to give a Hollywood screenwriter an order to create a feel-good, inspiring, underdog story about football, they might be able to come up with something half as good as the true story of the Fort Worth Masonic Home’s Mighty Mites. Veteran sportswriter Jim Dent tells an incredible story of a football team made up of undersized orphans that dominated the Texas high school football scene during the Great Depression playing an iron man style of ball. It’s beautiful, it’s poignant, it’s uplifting, and best of all, it is all true.

That First Season by John Eisenberg

In the pantheon of legends in football few names stand in higher reverence than that of Vince Lombardi. In a coaching career piled high with accolades – two-time NFL Coach of the Year, two-time Super Bowl champion, five-time NFL champion, Pro Football Hall of Famer – and that spanned three decades in high school, college, and the pros, Lombardi forged himself into a legend and became the standard of the profession. He achieved greatness in the small town of Green Bay, Wisconsin, as the architect of the Packers. Eisenberg takes a look at Lombardi’s first season in Green Bay as he took over a team that had been 1-10-1 the prior year and were considered the worst in pro football and planted the seeds of a dynasty.

Given the scope, magnitude, and popularity of the NFL is these days it is hard to imagine the humble roots of the game and where it fell on the pecking order of sports half a century ago. Michael MacCambrige takes an in-depth look (and what I feel is the best examination of this subject) at the sport’s metaphorical tipping point in terms of importance: the legendary 1958 NFL Championship Game. Dubbed “The Greatest Game Ever Played,” the contest between the New York Giants and Baltimore Colts was one littered by legends of the game (think Johnny Unitas, Frank Gifford, Gino Marchetti, Sam Huff, etc.) that achieved ultra-importance as being the first playoff game to go into sudden-death overtime with all of the high drama captured live on the still-new medium of television.

Buzz Bissinger may or may not have known how important his book was going to become as he was immersed and embedded in West Texas town of Odessa chronicling the Permian High School Panthers, but it is undeniable what it has become culturally. Spawning an award-winning film and a beloved television series, as well as countless imitations, Friday Night Lights was the first to not only give the behind-the-scenes peek into high school football culture and the day-to-day lives of its subjects, but it was also the first to expose the world to the importance that we (and I count myself squarely among the “we”) place upon our football, especially the Friday kind.

Carlisle vs. Army by Lars Anderson

As has already been mentioned, football is a sport in which high drama exists in every game, on every play. Often taken as a metaphor for life, football can be extrapolated out to explore and explain topics on a grander scale, such as race, politics, and the socioeconomic struggle between the classes. Lars Anderson, one of my personal favorite writers, takes all of this into consideration in this book that explores the epic clash between the Carlisle Indian Industrial School and the United States Military Academy. Legendary figures such as Jim Thorpe, Pop Warner, and future President Dwight Eisenhower are the central players in this amazing true story.

A Civil War by John Feinstein

Few games carry with it as much meaning and importance each year quite like the annual clash between the Army and Navy. John Feinstein, a longtime fan and advocate of amateur, collegiate sports, takes an in-depth and inside look at the true meaning behind this important game. While foes on the field, every single player will go on to serve their country right alongside their opponents. The brotherhood of football is expanded even further into one even larger, that of the brotherhood of military service. Feinstein personalizes the players and gives voice to their stories.

The Game of the Century by Michael Corcoran

It was Thanksgiving Day in 1971. The top-ranked and defending national champion Nebraska Cornhuskers took on conference rival, the second-ranked Oklahoma Sooners in a contest that would go down as one of the legendary “Games of the Century.” Corcoran goes into great details on the events leading up to the clash and explores it to its fullest quarter by quarter, as the tension builds, and the drama unfolds. It is one of the best books of this type and the subject is treated with the reverence that it has earned.