A look at the 40 U.S. National Team alums who've been selected in the NFL Draft 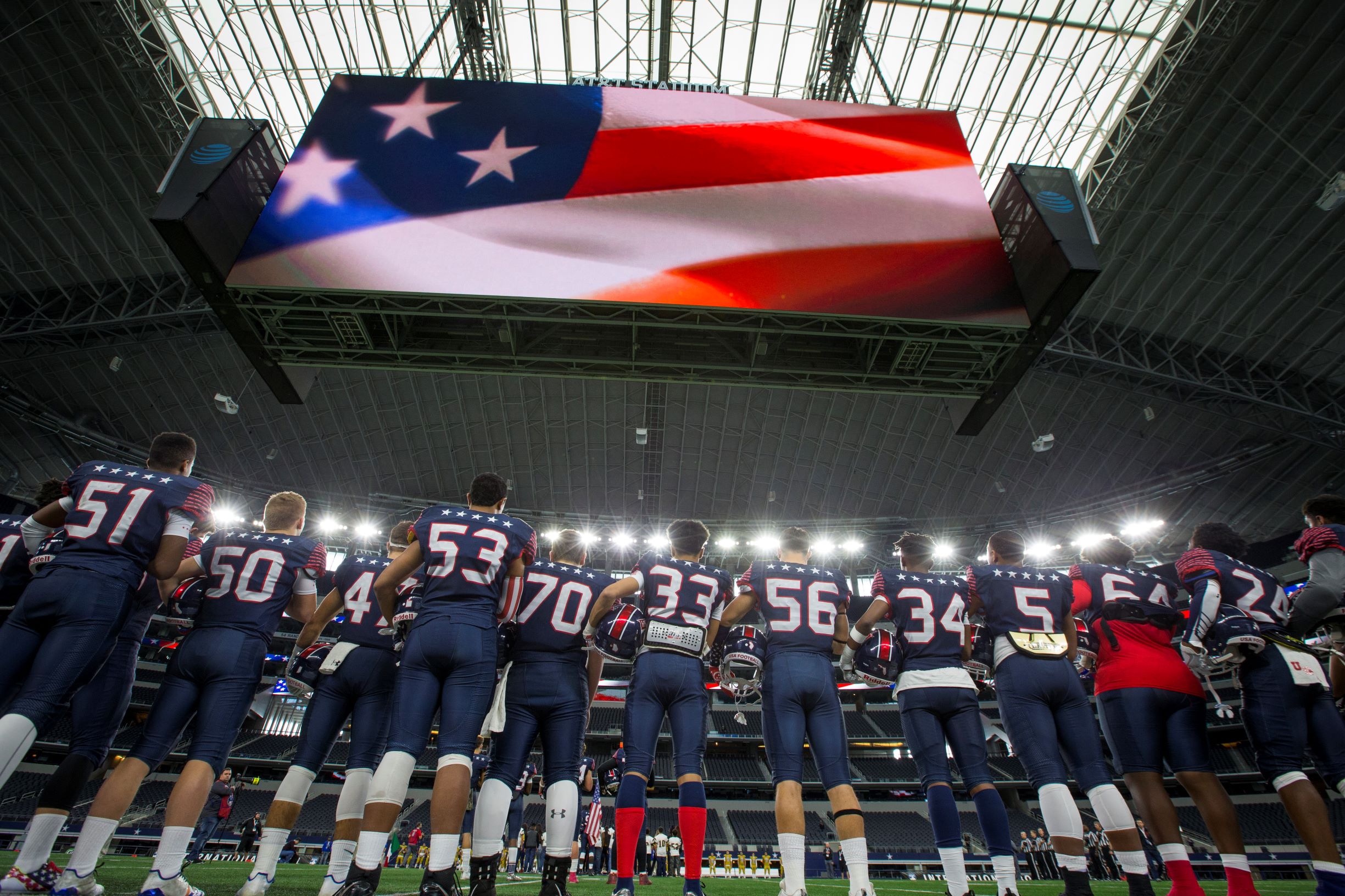 With the 2020 NFL Draft set to take place virtually starting today, it'll be a big day for several former U.S. National Team players, in addition to the hundreds of other prospective draftees.

11 U.S. National Team alumni will wait eagerly over the course of the next three days to see which team will make a lifelong dream come true and allow them to join the other 40 National Team alums that have been drafted over the past eight years.

While they await their names to be called, here’s a look at past U.S. National Team players who have been selected in the NFL Draft and how they’ve fared in their NFL careers:

Haskins played nine games, starting seven, in his rookie season. He accumulated 1,365 passing yards and seven touchdowns as well as 101 rushing yards. Haskins enters the 2020 season on top of Redskins’ quarterback depth chart where he’ll look to build off a strong final two weeks of his 2019 campaign that included a 70% completion rate, 394 yards, four touchdowns and zero interceptions. 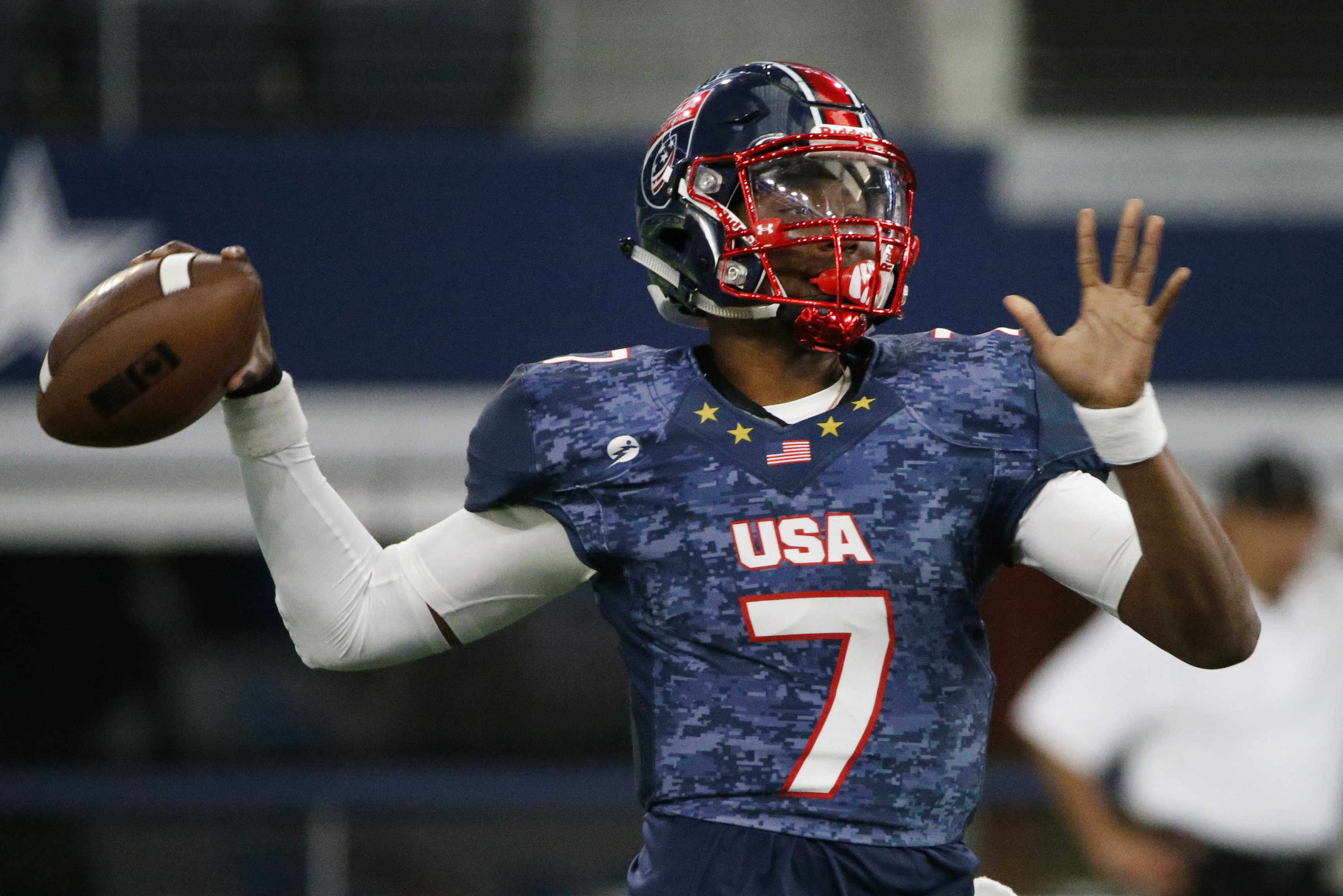 Harry collected 12 receptions for 105 yards and two touchdowns in the second half of his rookie season. Harry missed the first eight weeks with an ankle injury sustained in training camp. His selection last year marked the first time the Patriots drafted a wideout in the first round during Bill Belichick’s tenure.

Risner started all 16 games for the Broncos at offensive guard. His impressive rookie campaign landed him on the Pro Football Writers Association All-Rookie Team.

Hardman became a key piece of the Super Bowl champion Chiefs, playing in every game last season. Hardman tallied 538 receiving yards and six touchdowns on 26 reception, leading the team with a 20.7-yard average per catch. Hardman earned a second-team All-Pro honors and a Pro Bowl nod for his kick return success including a 104-yard return that keyed a second-half comeback win over the Los Angeles Chargers. 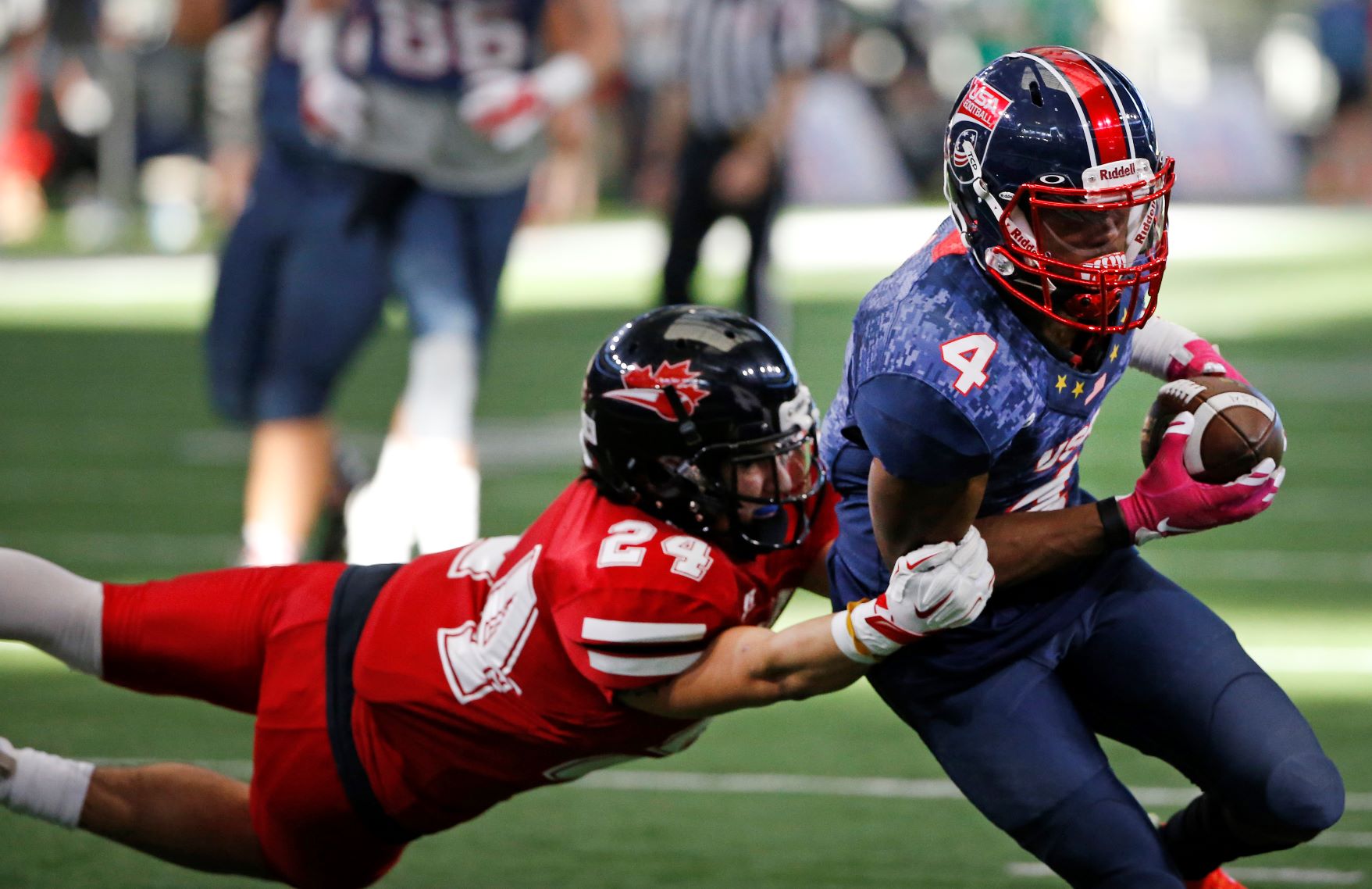 Rapp helped the Rams secondary in his first season by starting 10 games. His first career NFL interception was returned for a touchdown. Rapp finished the season with two interceptions, a fumble recovery and 100 tackles.

Joseph will look to get his playing career in the NFL going this season after having a season-ending shoulder surgery in September.

Wynn missed all of the 2018 season with a torn Achilles and sat out 8 games in 2019 with an injury, but shined in the eight games he played in for the Pats.

Phillips played all 16 games of his rookie season and started off his second season well before suffering a torn ACL three games into 2019. He has collected 38 tackles, four tackle for loss and a fumble recovery.

Griffin joined his twin brother and fellow U.S. National Team alum Shaquill once again as a member of the Seahawks in 2018. In his two-year career, Shaquem has played in every game he’s been in a Seahawks uniform, amassing 13 tackles and three QB hits. 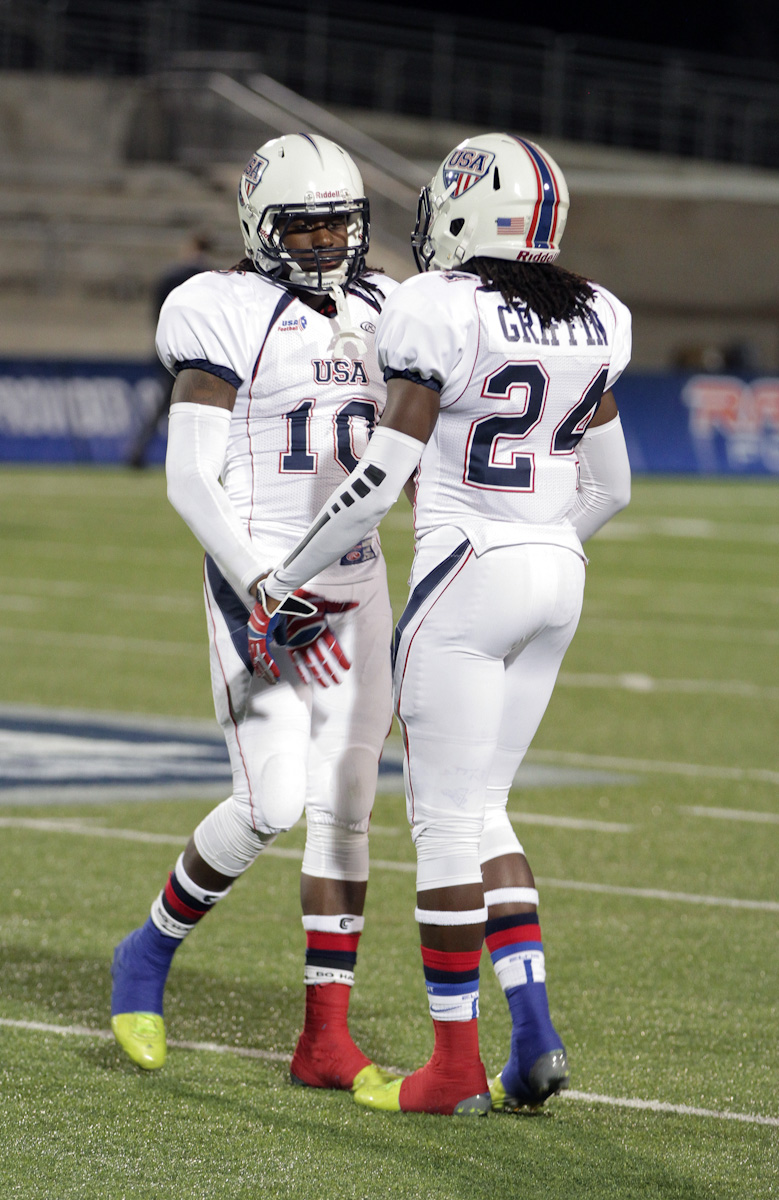 Jackson has been in a backup role for the Chargers the past two seasons. In his role, he has run for 406 yards and two touchdowns on 79 attempts to go along with 157 receiving yards on 24 catches. With the departure of Melvin Gordon to Denver, Jackson is poised to play a bigger part in the Bolts’ offense in 2020.

Teller started seven games with the Bills at left guard in his rookie season. He was traded the following season to the Browns, appearing in 15 games in which he started the final nine.

Pocic has been a consistent force in the middle of the Seahawks offensive line, starting 16 games and playing in 30 over the past three seasons.

Shaquill has led the Seahawks defense over the last three seasons, contributing 186 tackles, 36 passes defensed and three interceptions. He earned his first Pro Bowl nomination in 2019.

Lewis has shut down opposing pass catchers over the past three season. Lewis has four interceptions, 117 tackles and 17 passes defensed in 46 career games.

Perine, now with the Miami Dolphins, has played 28 career games. He has rushed for 651 yards and a touchdown.

Gedeon, who’s appeared in 39 games and started 22 for a stingy Vikings defense, has racked up 103 tackles in three seasons.

Rodney Adams played one game with the Minnesota Vikings and he now is on the active roster for the Indianapolis Colts.

Odenigbo played all 16 games for the Vikings last season and finished the year with 23 tackles, seven sacks, one forced fumble and two fumble recoveries, one of which was returned for a touchdown. 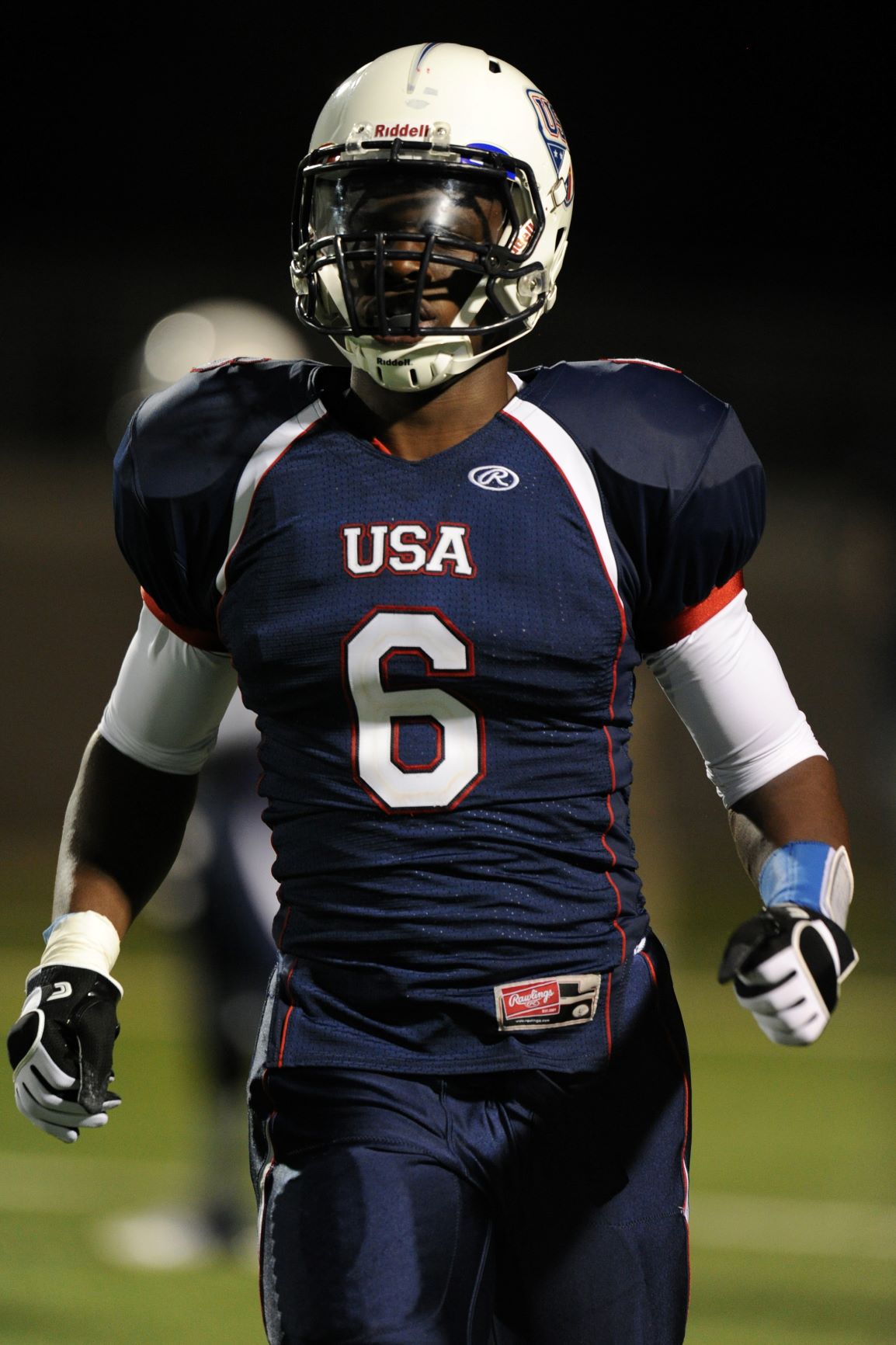 Hogan, who is currently a free agent, played eight games for the Browns in 2016 and 2017. He threw for 621 yards and four touchdowns.

Hunt has played 34 games for the Seahawks, starting 11.

Ayers played two career games for the Steelers in 2016 catching six passes for 53 yards and a touchdown and was recently signed by the Saskatchewan Roughriders of the Canadian Football League. 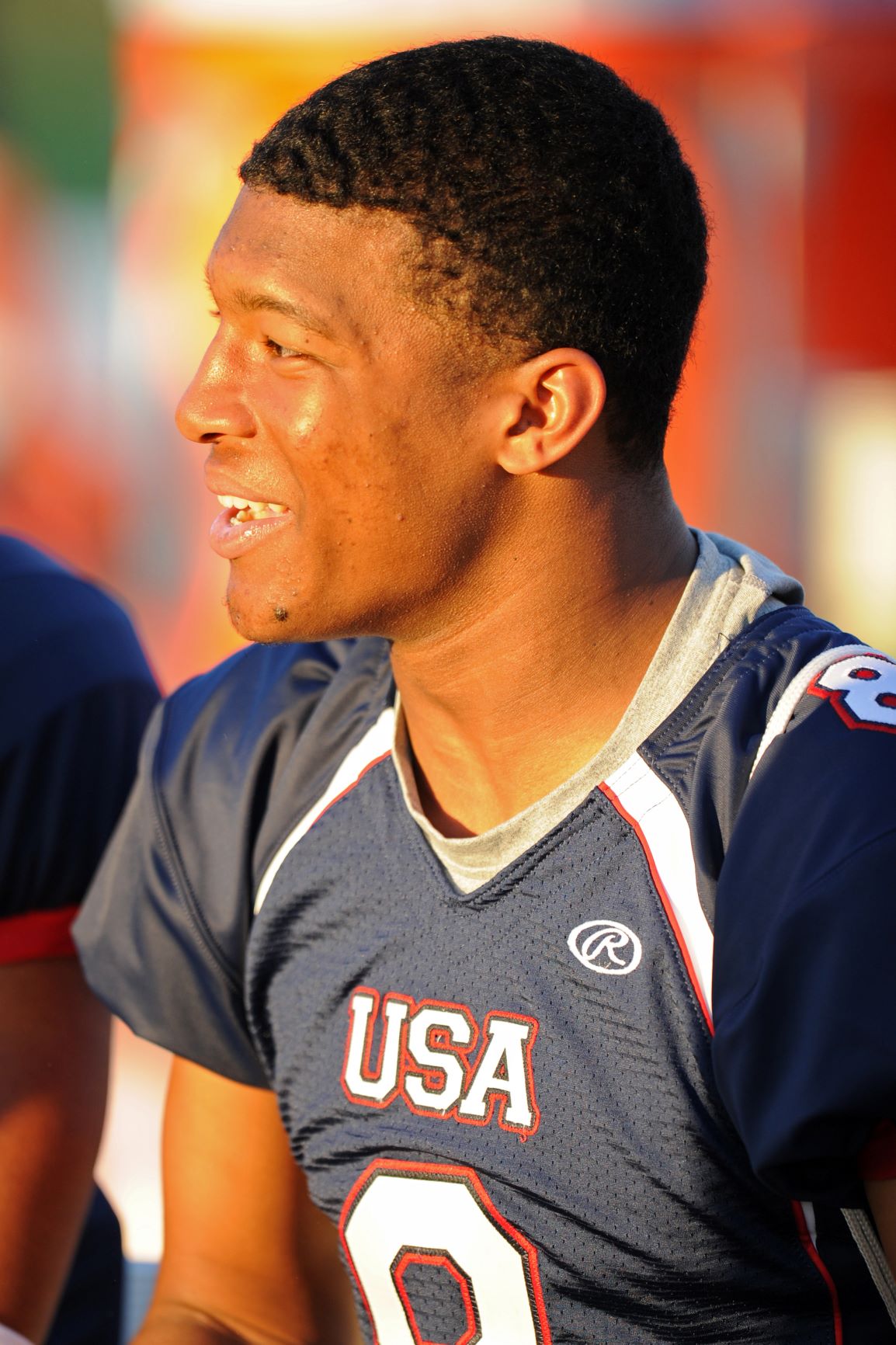 Gurley, now an Atlanta Falcon, enjoyed a successful five seasons for the Rams including two First-Team All-Pro selections, three Pro Bowls and a nod as NFL Offensive Rookie of the Year. Gurley has run for 5,404 yards and 58 touchdowns to go with 2,090 receiving yards and 12 receiving touchdowns. In 2017, he was awarded the NFL’s Offensive Player of the Year after leading the NFL in rushing touchdowns, a feat he’d accomplish in 2018 as well. 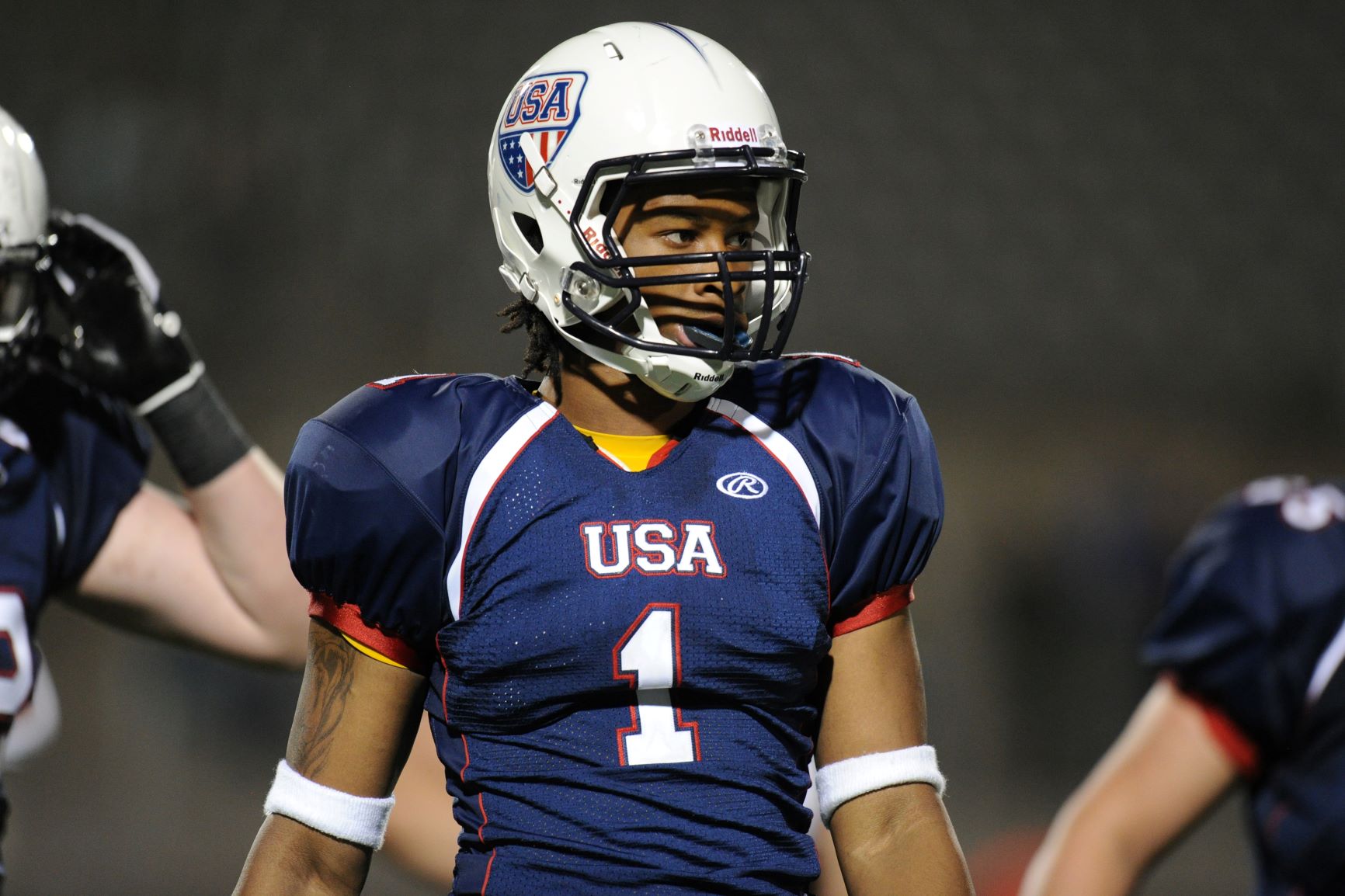 Brown, now with the New Orleans Saints, has stockpiled 220 tackles, 20 tackles for loss and 10.5 sacks. He won two Super Bowls with the Patriots.

Funchess recently signed with the Green Bay Packers. He has caught 164 passes for 2,264 yards and 21 touchdowns in five seasons with the Panthers and the Indianapolis Colts. 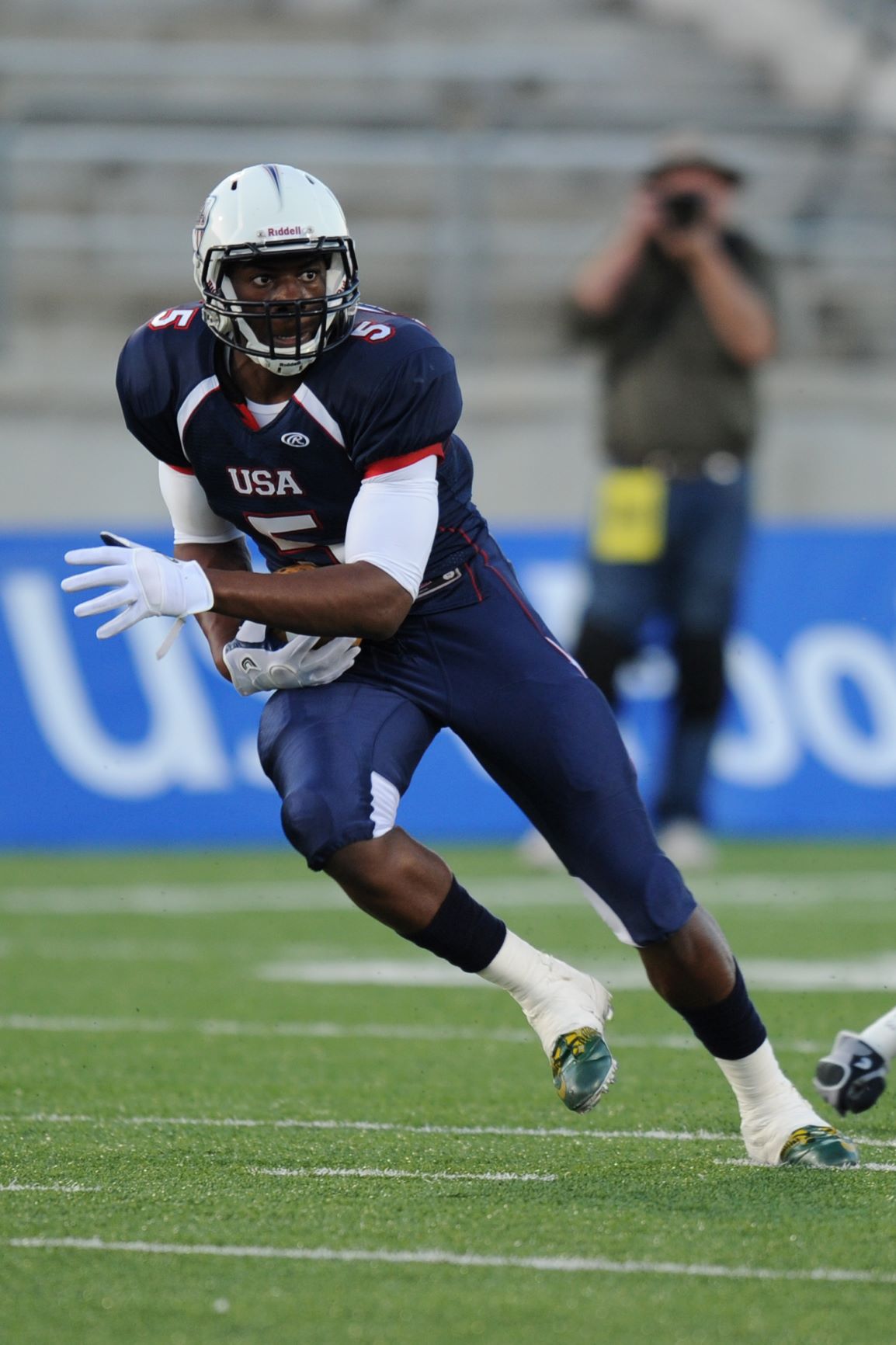 Current free agent Alex Carter has played two games for the Lions and Washington Redskins. He has had stints on the New England Patriots, Seattle Seahawks, Chicago Bears and Carolina Panthers practice squads.

Montgomery, currently a free agent, transitioned to a running back in 2016. He has run for 1,035 yards and seven touchdowns and added 982 receiving yards with the Packers, Ravens and Jets.

Bennett is currently a free agent. He has collected 16 tackles in 16 career games. He last appeared with the Falcons in 2018.

Tuitt has been a steady producer for the Steelers. In six seasons, he has accumulated 201 tackles, 23.5 sacks and four forced fumbles.

Mewhort suffered knee injuries throughout his career. He retired before the 2018 season after playing in 45 games for the Colts.

Reese has yet to play an NFL game. The Chargers waived him before the 2014 season, and the Cincinnati Bengals then signed him to their practice squad, where he remained until the end of the 2015 preseason. He last played football for the CFL’s Winnipeg Blue Bombers in 2016.

Dobson played three seasons with the Patriots, including their 2014 Super Bowl championship season. He totaled 53 catches for 698 yards and four touchdowns during that time. He is currently a free agent.

Mathieu has made a name for himself as one of the best safeties in the league. He contributed four interceptions, 12 passes defensed and 75 tackles during the Chiefs’ championship season. Mathieu has been twice named First-Team All-Pro (2015, 2019) and is a member of the NFL’s 2010s All-Decade Team. In seven seasons piling up 17 interceptions, 61 passes defensed and 472 tackles. 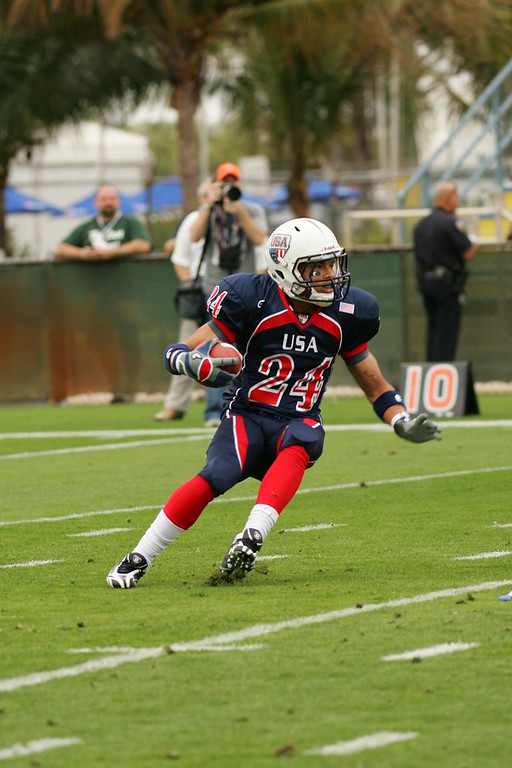 Aboushi, now with the Detroit Lions, has also played with the Jets, Houston Texans, Seattle Seahawks and Arizona Cardinals. He has played 49 career games, starting 34.

Poyer, entering his fourth season in Buffalo, was a key cog in helping the Bills to their first playoff appearance in 2017 since 1999. He intercepted five passes, returning one for a touchdown, and collected a pair of sacks to go with 95 tackles. He played most of his career with the Cleveland Browns, before moving to Buffalo in 2017, with career totals of 426 tackles,13 interceptions and six sacks.

The first U.S. National Team alum to be drafted, Wilson played two seasons with the Giants, during which he rushed for 504 yards on 115 carries with four touchdowns, caught six passes for 42 yards and a TD, and averaged 26.6 yards on 66 kickoff returns, including a 97-yard touchdown during his rookie season.