In early March, Alex Charlton arrived in Wichita Falls, Texas excited to resume his college football coaching career working as a graduate assistant at Division II Midwestern State University. Come April, he pressed pause on his coaching duties and flew to New York City to work as a nurse at the epicenter of the Coronavirus pandemic inside Mt. Sinai Hospital.

For Charlton, the impetus for his decision was simple. It’s what led him to get into coaching in the first place and nursing after that when his coaching career came to a standstill in 2015: There’s no greater feeling in the world than helping someone get better.

“When the magnitude of the crisis became clear and knowing football was on hold with school closed, it was instinctive to search for an opportunity to help,” Charlton said. “Understanding there was a huge outbreak in New York and thinking what was probably going on in those emergency departments (ED), I felt called to go there and do all I could to help.” 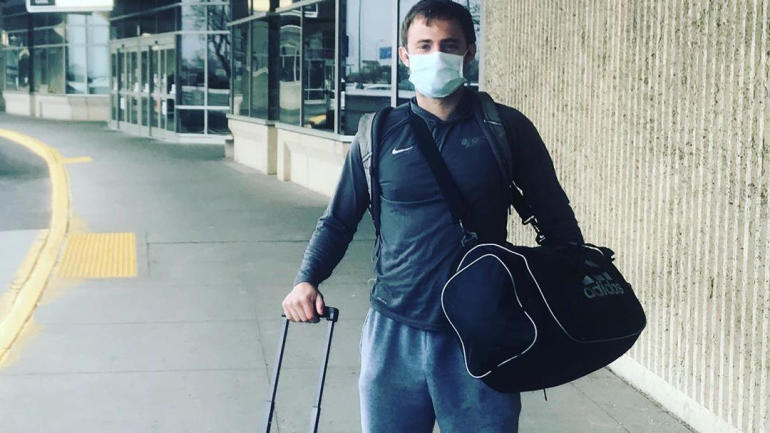 Due to working other ED jobs and serving as a travel nurse, Charlton was contacted through a database and presented with a variety of opportunities to help hospitals throughout the country. After talking with nearly 20 different recruiters across 20 different agencies, he chose Mt. Sinai Hospital in New York City, otherwise characterized at the time as “the front line of the front line.”

Charlton jumped right into his weekly four-day, 12-hour shifts upon arriving on April 6 as the hospital was experiencing the tail end of a peak in infections. While his previous stints inside other EDs had prepared him for most of the work he was doing, Charlton, like others, was also experiencing his fair share of “firsts.”

“It’s sad to be treating patients and know they can’t have their family members present, talking to them and supporting them through a very scary time,” Charlton said. “As nurses, we’re doing all we can do to be there for our patients whether it’s talking to them, listening to them or connecting them with their families that under normal circumstances would be present.”

Though Charlton says the number of cases at the hospital has regressed and each passing day brings more “normalcy” to the emergency department, it was his experience on the sideline that has kept him composed in the direst of circumstances.

“Football is the ultimate team game. You have a job to do, but you also have to trust that your teammates are going to do their job in order to achieve success. It’s the same here in the hospital,” Charlton said. “Teamwork and accountability are crucial in what we do. You have to trust the doctor and what they’re telling you. Then sometimes your patients might be doing well, but there’s other nurses you’re working alongside who have troubled patients, so you lend a hand and step up to help them because you know they’d do it for you. It all leads to positive outcomes, which is our favorite complication.”

Currently only two weeks remain on Charlton’s initial two-month contract with Mt. Sinai, but he’s unclear of what the next couple months may look like. As cities and states across the country begin to ease restrictions and reopen, another potential outbreak poses a threat. He’s heard of other hospitals in New York that could use help and says he’s fully prepared to go there if the opportunity presents itself.

Whatever the future holds for Charlton, he looks forward to the day when he can trade in his scrubs and faceshield for a whistle and headset.

“The itch to be a college football coach has always been there and has been my No. 1 goal for as long as I could remember,” Charlton said. “I feel like it’s something I can do with the best of them, and I just hope that when I’m able to return to coaching that my players take what I did during these times and realize how much I care about them.”

And whenever that day comes and sports return, we’ll have people like Alex Charlton to thank.