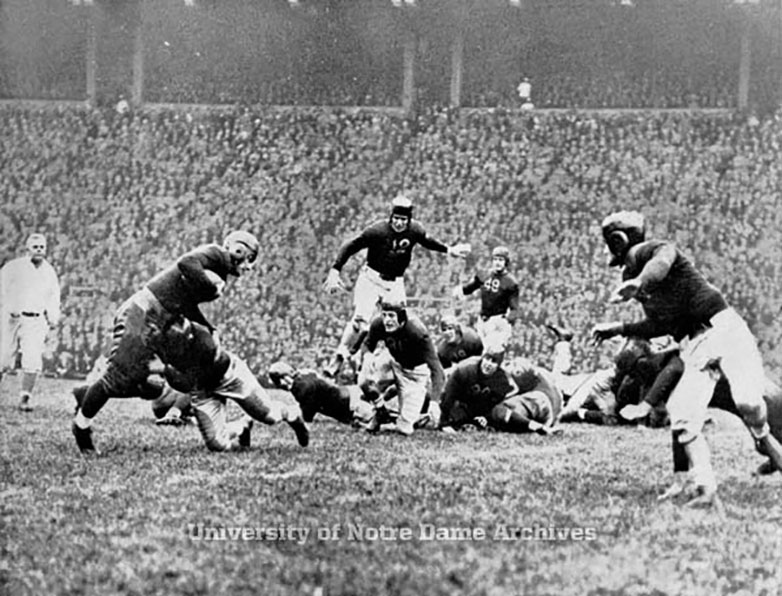 In college football, few teams carry with them larger legacies than the Ohio State Buckeyes and the Notre Dame Fighting Irish. Between the two schools, they lay claim to 19 National Championships and 14 Heisman Trophy winners.

Notre Dame first fielded a team in 1887 with Ohio State following in 1890. While they combine for well over 200 years’ worth of football between them, these two blue blood programs have only met on the field a scant 6 times. None proved to be more important as their first. 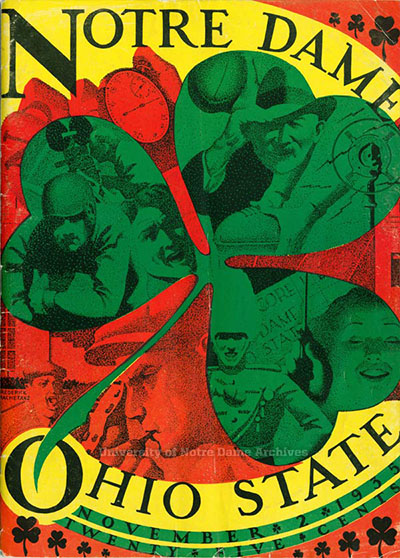 In 1935, 85 years ago, the Buckeyes and the Fighting Irish were on a collision course in their first meeting, which would go down as the first of the sport’s fabled Games of the Century. Notre Dame was 5-0 and Ohio State was 4-0 heading into their matchup on November 2.

A massive crowd of over 81,000 filled Ohio Stadium and saw a clash of two outstanding teams. Every major news outlet of the day made the trip to Columbus for the game, including sportswriters from New York and all of the powerful national radio networks of the day. Reports surfaced that over 200,000 tickets were printed up for the game with some people paying scalpers upwards of $50 a ticket.

Upon their arrival from South Bend, the Irish were given the key to the city of Columbus by Mayor Henry Worley. The gregarious official proclaimed: “This will get you in, but it might not get you out.”

The Buckeyes jumped out to a big 13-0 lead that carried into the fourth quarter. Three minutes into the first quarter, Ohio State defender Frank Antenucci intercepted a pass from Irish quarterback Mike Layden. During the return, Antenucci lateraled to teammate Frank Boucher who raced 65 yards to the end zone. A pair of field goals gave the Buckeyes the lead and the momentum in the fourth quarter. However, that was when Notre Dame took over.

Feeding off several Ohio State miscues; the Irish would rally for three fourth-quarter touchdowns. Layden and future College Football Hall of Famer Bill Shakespeare passed their team back into the game. With 32 seconds left in the game, Shakespeare from his halfback spot would find end Wayne Millner in the end zone for the game-winning pass. This was an especially bitter pill for Ohio State as the All-American Shakespeare was a Cincinnati native. When the final whistle sounded, Notre Dame had won by a score of 18-13. 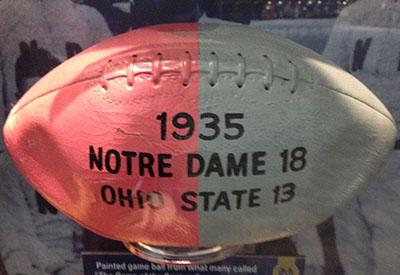 “If anybody has to be blamed, blame me and not the boys,” Schmidt would say after the game and admitting he suffered from a lack of sleep the night before. “I kept lying there thinking how much easier it would have been to have won that game than to have lost it.”

The game was the most covered sporting event of 1935. When writing about the game for The New York Herald, the legendary Grantland Rice said: “This was one of the finest things I’ve ever seen in football.”

Notre Dame would suffer a letdown the next week in a loss at home against Northwestern. They would tie Army the following week to finish the season 7-1-1.

The Buckeyes would remain unbeaten the rest of the way and be named co-champions of the Big Ten with the University of Minnesota. Both would finish in the top ten rankings, but neither was close to being named National Champions. Various polls at the end of the season would name Texas Christian University, Southern Methodist University, Princeton, and Minnesota as National Champions.