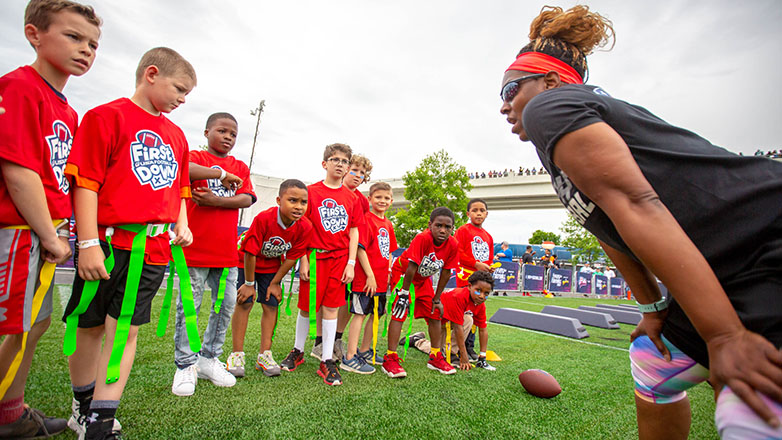 At any level of football, the end of each season closes the door on one chapter of a player’s journey. With that comes a flip of the page to the next blank sheet that has not yet been written.

Individually, one has to work harder in the off-season to come back stronger and better the next year. A player also might be motivated to do what they can to be a better teammate and more of a leader.

In USA Football’s Football Development Model, there is a pillar that focuses on Physical Literacy & Skill Development. It relates to a player setting goals before the start of the season to make sure they are developing and mastering new and old skills. It could be an individual or team goal but it’s about growing as an athlete throughout each season. This is why goals are important for all involved in the journey – athletes, parents and coaches.

In 2012, my son Bradley was in his third season of playing tackle football, but it was his first year at a competitive stage. The team played in a league that competed against teams from other towns. Bradley did not get a lot of playing time that year. There were weeks where the coaches did not have him on the field for the minimum amount of plays required by the league for each player. I talked to the coaches about what he needed to do to get more time, but they just kept saying, “He’s doing fine.” Bradley’s team won the championship that year, which he was happy about. But he wanted to be on the field more and he was motivated to make it happen.

The following year, he had new coaches. Bradley reported to training camp that summer with two goals: To become the team’s starting center and to be on the field as much as possible. He talked to the coaches and to my wife and I about those goals. He ended up accomplishing both of them. He’s been a starting center in youth football and middle school football ever since and he’s hoping to carry that into high school football this coming season.

My son Jared has played three years of flag football. Each year he has played he has set some goals for himself. He was so excited to be able to play a version of the game he enjoyed watching on television.

Jared certainly had his share of touches that first season and scored a touchdown in one of the games. But the following year, he was “drafted” by a different coach. In the case of Deja Vu for our family, Jared didn’t get on the field much.

He was devastated and that got his juices flowing last season. Jared worked hard to prepare for the season. He was happy to be on a team with some friends from school and to be with a new coach that gave equal playing time. That season, he was on the field a lot and even had the chance to play quarterback. Now he’s working hard on his spirals and accuracy to become a great quarterback.

We’re all very excited to see how it all unfolds this fall.

It’s important for kids to set goals for each season. Sometimes those goals can be set off of a negative experience or a positive one. Goals – individual or team – are an essential part of football and for developing as an athlete.