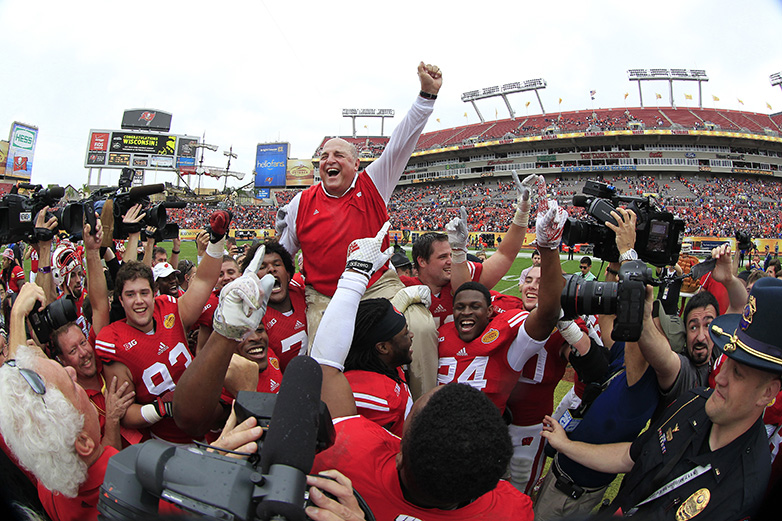 Few people are more identified with a college football program more than Barry Alvarez is with the University of Wisconsin. Now in his seventeenth year as the Athletics Director, Alvarez spent 16 years as the Head Coach of the Badgers. During his tenure, Alvarez helped turn a program that had been long dormant into a consistent winner and a true powerhouse in college football.

His football career began during grade school on the fields of his hometown of Langeloth, Pennsylvania. Alvarez was a multi-sport athlete, first excelling in baseball before taking up football. His career really took off once he got to Burgettstown Union High School where his prowess would earn him a scholarship to the University of Nebraska to play for the Cornhuskers under legendary Head Coach Bob Devaney.

“I have been fortunate for my whole career playing and as an assistant to be involved with some really outstanding coaches,” Alvarez said. “Guys that I really looked up to, guys that were good teachers, guys that really understood the game well, and guys that really got other people to really want to play for them. My high school head coach was that way and Bob Devaney was really that way. I thought he was really ahead of his time and I admired him for it. I learned so much from him that I really wanted to be just like him.” 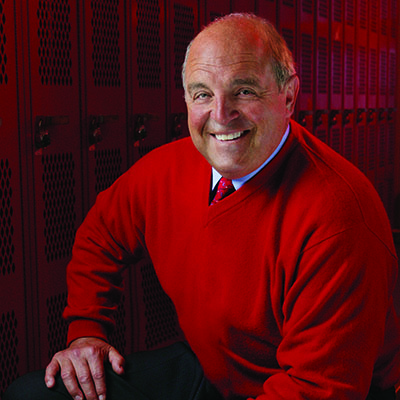 It doesn’t make a difference who anybody is, you go out there and compete and do the best you can no matter what.

After graduation, Alvarez began his career coaching high school, first at Lincoln Northeast High School for three seasons before earning his first head coaching job in 1974 at Lexington High School. Out of the blue, he would be offered a job at Iowa’s Mason City High School. It would begin here, that fate intervened as Alvarez would be introduced to yet another future Hall of Fame Mentor in the University of Iowa, Head Coach Hayden Fry.

“It didn’t take us long to get things up and running at Mason City and we won the state championship by our third season there,” he said. “It was about that time that Hayden Fry got to Iowa. I was able to join his staff and that was huge for my career. He wanted some guys who knew the state for recruiting purposes and it worked out great for me. It was a great staff and I stayed there for eight seasons.”

His next stop took Alvarez to South Bend, Indiana, and the University of Notre Dame to serve as an assistant under Head Coach Lou Holtz. He would work his way up to becoming Defensive Coordinator for the Fighting Irish and helped the team win the National Championship in 1988. After Notre Dame’s 1989 season, the Badgers came calling.

“Lou Holtz reached out when he was in his second year at Notre Dame and he asked me if I wanted to be a Head Coach one day,” Alvarez explained. “I said, ‘of course’ and he told me that would never happen unless I was a coordinator somewhere. He told me if I did a good job with him, I would have a shot. I was named defensive coordinator in 1988 when we won the National Championship and that got me some attention for some jobs. Ultimately, I decided to take the Wisconsin job when [then Athletics Director] Pat Richter contacted me. The program was in really bad shape, but I saw the potential there.”

He took the reins in 1990 and the program had gone 9-36 during the previous four seasons. From that point on, he would become the winningest coach in Wisconsin history compiling a record of 119-74-4. Under Alvarez, the Badgers won three Big Ten Championships and three Rose Bowls. He is the only Big Ten Head Coach to win 100 games at the same school. Under his stewardship, Wisconsin experienced its most successful run in school history.

“The program had only been to five bowl games in its history before I got there and the facilities were really in a bad way,” said Alvarez. “I really felt there was potential if I could just keep the kids from Wisconsin in the state. We’re the only Division I program, much like things were in Nebraska. I knew if I got those kids to buy into what we wanted to do we could get things turned around.” 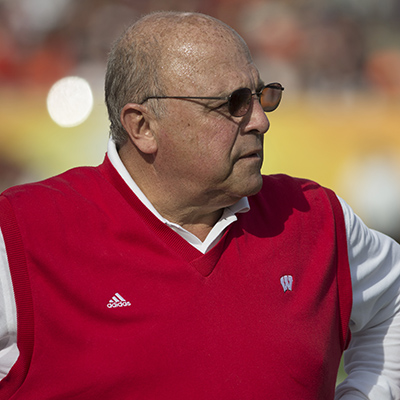 As a Head Coach, you always have to look at best practices and never be satisfied.

Alvarez stepped away from the sidelines after the 2005 season to take over the role of the school’s Athletics Director, though he would step in as Interim Head Coach when the school needed him in 2012 and 2014. Since then, he has not only led the Badgers to unprecedented successes in all of the university’s 23 sports programs, but has also continued to earn personal accolades, such as being elected to the College Football Hall of Fame in 2010.

“As a Head Coach, you always have to look at best practices and never be satisfied,” he explained. “Whether this is your team, your staff, your facilities, or yourself, you should always be looking for ways to improve. You should never stay status quo. Lou Holtz taught me this. You either get better or you get worse, but you never stay the same.”

Through all of the ups and downs, Alvarez has remembered the lessons of his coaching mentors. He has always striven to improve in everything he’s done, whether it’s playing, coaching, or in administration. He has always remembered a crucial lesson dating back to his high school days.

“I’ll never forget though when I was a senior in high school, we would always play schools that were bigger than us,” Alvarez said. “This particular game, we got to the stadium and the other team is out there with like 100 players and it’s a big, packed stadium.

“We were watching them with big eyes and Coach got us together and I’ll never forget this. He said, ‘You know what, I don’t care how many people they have. I don’t care how they’re dressed. They can only put 11 people on the field and our 11 guys are gonna kick they’re 11 guys asses.’ And we did. I always thought of that when I or the team was in a big situation. It doesn’t make a difference who anybody is, you go out there and compete and do the best you can no matter what.”

Photos are courtesy of Wisconsin Athletics.