Back to Basics: Building on Skills is Part of the Game 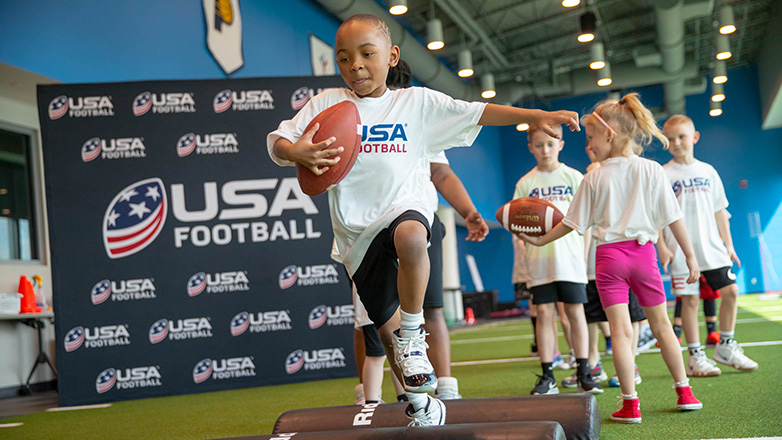 When a child steps onto a football field for the first time, they are not learning how to line up for a shotgun formation or how the 3-4 defense is different than the 4-3.

When kids are four, five or even six years old, there’s not much chance of seeing a fifty-yard completion downfield or an exotic blitz that results in a sack. Learning how to play football starts with the basics and that can be something as simple as learning your left from your right.

“The basics are the basics for a reason. We have to teach the fundamental movements and techniques first so more complex skills can be added later.”

It seemed silly at first, but when my son Bradley showed up for his first-ever football practice at the age of four, the coach gave each child a set of wristbands, one red and one white.

This was “peanut football”, an instructional level of football that was part of our local program where the kids who registered were split into teams and played against each other on the home field each week with no travel. It was simply instructional and that started with making sure the kids knew which way to run.

The white wristband went on the left hand and the red wristband went on the right hand. If the coach called a white-run, that meant that the running back would run to the left. If the call was a red run, you guessed it, that meant a run to the right. The coach had to go on the assumption that, at that point, not every child knew his or her left from their right. He decided to make it simple for them. They knew their colors, so the plays were devised around white and red.

At the beginner level, it really needs to be as simple as knowing what direction you have to run, where to stand, and how to hold the football. As the season goes on, a coach can add in some things like short pass plays. Then each season, the teaching of the fundamentals can increase.  Football can be a complex game, so you don’t want to overload at a young age or try to have a young player learn too much at one time.

And sometimes even an experienced player needs to go back to the basics.

Once Bradley started playing at the pee-wee level for the local program that was in a league that played against teams from other towns, he became the center and had some good chemistry with the quarterback.  However, sometimes there can be some hiccups even with kids that have played for a few years. Not everything goes smoothly even when a child is seven or eight years old. There was a point where Bradley and the quarterback had some problems with the exchange of the ball.

While it seems like such a simple part of the game, it’s not as easy as it looks. One night, before practice officially began, Bradley and the quarterback spent some time just working on the exchange. Bradley snapped it and the quarterback handed it back to him. They did it again…and again…and again….and not to sound like DJ Khaled but they did another one…and another one. They didn’t have a fumbled snap the rest of the season.

Football can be complex, but it all comes down to the basics.