How Football Has Impacted Me 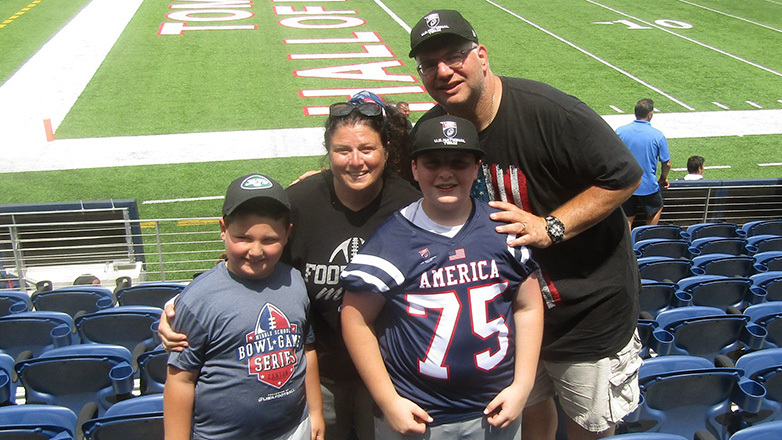 Football has been a big part of my life going all the way back to my childhood.  I never actually played football other than a neighborhood game of two-hand touch, but it’s a sport that I grew to love at a young age.

My father took me to my very first Jets game at Shea Stadium on December 11th, 1977 when I was ten years old. The Jets lost to the Buffalo Bills 14-10 on what was a cold and windy day. Truth be told I got sick after the game and couldn’t go to school the next day.

Despite the weather, the Jets losing and getting sick, I was hooked on football.

After my family and I moved from Queens to Long Island in 1979 when I was twelve, we lived not much more that a long touchdown pass from where the Jets had training camp at Hofstra University. I would often ride my bicycle to go see my beloved Jets practice. I still have the collection of autographs that Jets players had signed for me over the years. There was also the one time that a player threw a ball to me after he had a bunch of teammates sign it.

The game has meant a lot to me and afforded me some amazing opportunities over the years – both personally and professionally. In my career as a broadcaster, I’ve been fortunate to be at eight Super Bowls, an AFC Championship game, talk to star players and go to so many memorable regular season games that I would need a separate story to cover all of them.  But if you really want to ask me when the game of football made its biggest impact on my life, it’s family related.

The day was July 7th, 2018 when my son Bradley played in the USA Football Middle School Bowl Game Series for the first time.

I had already been to the biggest football game on the planet numerous times. I’ve met and interviewed some of the biggest stars that had ever played the game. Honestly, I don’t think I ever had goosebumps at a football game until I saw my son run through the USA Football tunnel onto the field at Tom Benson Hall of Fame Stadium in Canton, Ohio wearing a jersey with “USA” on it.

I’ve shed tears just twice in my life when it came to football. Once was when the Jets lost to the Dolphins in the AFC Championship game and the day in Canton watching my son represent his country.

It’s been so joyful and rewarding for me to see Bradley make the journey from pee-wee football to the higher stages of youth then middle school and now high school football (that will actually be in March when the COVID-delayed season is expected to take place).

Also, seeing my younger son Jared grow to love the sport and play in his fourth year of flag football has been so rewarding. My wife and I take the boys to a Jets game at least once a year (sadly not this season since fans are not yet permitted to attend games) and we spend a lot of time as a family watching football on television.

Football has been a big part of my DNA for a long time.

Today, football remains a huge part of my life – both at home and at work.  I don’t cover NFL games anymore, but I still get to write and talk about it here and there. Watching my kids play is awesome. I have also relished the opportunity to do public address announcing at my son’s games while also being a parent volunteer. I particularly like when the stick that I’m holding is right at the line of scrimmage so I can look straight ahead and see Bradley snapping the ball. (You get some really good photos from that angle!)

We are a football family. It’s the family aspect of the game that I believe has had the biggest impact on my life when it comes to the sport.

I think it’s appropriate that last summer at the Middle School Bowl Game Series that the U.S. National Football Team staff wore t-shirts that said “FAMILY” because that’s really what its all about.

Peter is a sports anchor for the CBS Sports Radio Network and WFAN Radio in New York.  His son Bradley is entering his first year of high school football and is a participant in the U.S. National Team program while his younger son Jared plays flag football.   Peter, his wife Sheryl and the boys are busy cheering on the New York Jets when they’re not at a youth.