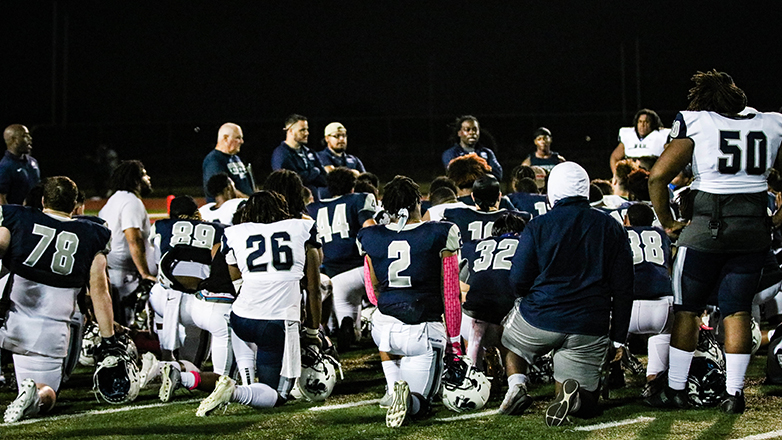 By all accounts, the year 2020 has been an unprecedented one in human history. The COVID-19 pandemic has impacted the lives of everyone on a global level. No industry has been spared from its ravages. This has been doubly true for sports – especially for football.

The 2020 season has been turned upside down with seasons canceled, seasons postponed, and seasons delayed. Even with seasons underway, games have been canceled and rescheduled at the last minute. When they have gone on, they’ve been with limited or no fans at all.

For the North American University Stallions, the 2020 season was intended to be a history-making one – their inaugural one. For the players, coaches, and administrators at the small, private university in Houston, Texas, 2020 was to be the unfurling of a plan that had been put into motion years before and one that brought football to their fields. Then, the pandemic struck and threw all of those plans for a proverbial loop.

“It’s not like there is really any kind of blueprint out there on how to start a program from scratch,” said NAU Athletics Director and Head Football Coach Kenneth Apande. “That’s especially been true at this point in time. The challenges, oh my God, let me tell you. We initially, in 2019, wanted to have three recruiting classes before we started. We had about 40 kids that red-shirted and then we added another class. Everything was working out and gelling and then the pandemic got us. Luckily, our administration backed us up and was fully behind us still starting this thing.” 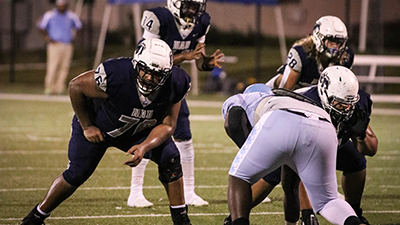 Apande, who could almost be considered a football lifer after having spent years on the field as a player in college at Missouri Valley State then as a professional in the arena leagues and then as a coach for years, was the perfect fit for NAU’s fledgling athletics department. After coming back to coaching having spent time away as an entrepreneur and businessman, Apande rediscovered his love of education. The job at NAU would be the perfect marriage of all of his interests and would allow him to build something special from the ground up.

“The plan was already in the works to start the football program before I got the job here,” said Apande. “I was invited in as a contract coach. There were a handful of kids and so we did strength and conditioning and seven-on-seven stuff and it just went like that. The kids liked me, and the administration liked me. They ended up hiring me full-time as the AD to help start the athletics program and the football program after that.” 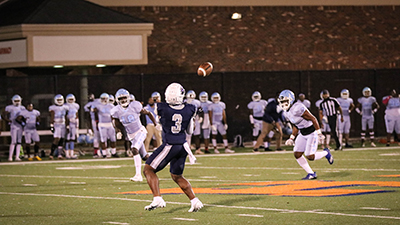 In March of 2020, the effects of COVID-19 were visible all over the country and especially in Houston. Apande and his staff’s plans for their impending debut season were scrapped. Forced to do everything on the fly in order to complete their eight-game season. Under even normal circumstances, this season would’ve been a trying one. Adding in the constant cloud of uncertainty has made things even more challenging than anyone could’ve anticipated.

“It has been a challenge as I’m still moving the schedule around,” said Apande. “I’ve probably talked to every Division II, every Division III, every JUCO, every prep school in the state of Texas, Louisiana, Oklahoma, New Mexico, Arizona. Basically, everyone in our region. It has been a challenge trying to get our schedule filled out, but if we’re able to finish this thing out and get our eight games, I will definitely be satisfied with this season.” 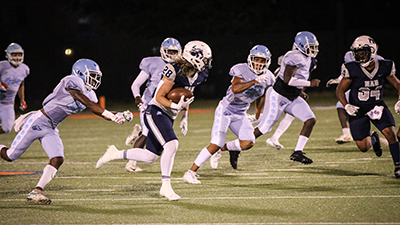 In spite of the challenges, Apande has taken everything in stride. He and his players have relished the opportunity presented in front of them. They are the first in what they hope is a long and storied Stallions program history. They plan on finishing strong this season and playing a handful of games in the spring.

The ultimate goal is to be a full-fledged member of the NAIA in 2021, possibly as members of the Sooner Athletic Conference in football. As of mid-October of this year, the Stallions have posted a winning record half-way through their campaign. However, this year is not about wins and losses. When it is all said and done, Apande and his team are getting the chance that few in football get the opportunity to do: Create a legacy.

“This has been just a great opportunity from day one,” Apande said. “You know, I’m an entrepreneur. I’ve got my MBA. I’ve always been interested in starting a business and that’s the approach I’m taking here. This is a chance to start something brand new. The logistics of starting something from ground zero are a challenge. That’s really true at this point in time. But our mission is to be respected as one of the best football programs in the nation. We’re in a great location here in Houston, which is a hotbed for football in Texas. We’ve got a long way to go, but I know we’ll get there.”