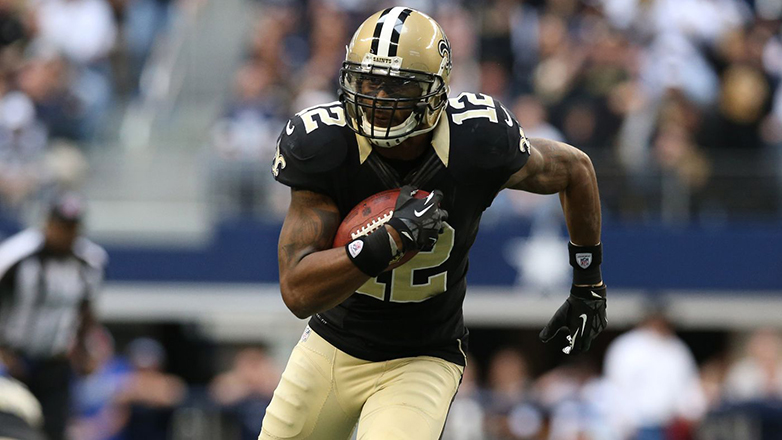 The annals of football are littered with the names and stories of players who seemingly sprang from out of nowhere and go on to accomplish amazing things on the gridiron. For a decade playing for the New Orleans Saints as one of future Hall of Famer Drew Brees’ favorite targets, Marques Colston was one of these types of players.

A seventh-round draft pick out of Hofstra University, Colston was overlooked, under-recruited, and came into the NFL looking to prove something to everyone who had doubted him. Colston knew he had the talent to compete at the highest level; coupling that with a football bloodline, pedigree and an indomitable work ethic, he had no doubt that he would find success on the gridiron. 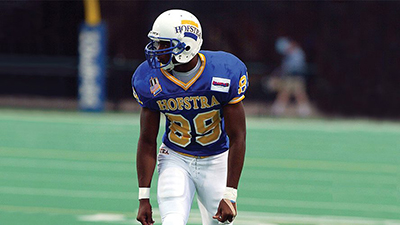 “Coming out of high school, I was really under-recruited and only had two offers,” Colston said. “I ran something like a 4.8 (40-yard dash) and was around 175 pounds. I knew I had to grow into my body and develop, but I knew I would. I took my visit to Hofstra and fell in love with the campus and the coaching staff. I walked onto campus on day one and my goal was to play in the NFL. It started to become more of reality in my junior year. I was putting up some good numbers and I knew I was on some people’s radars. I felt that if I put together a strong senior campaign, I would give myself a shot.”

As part of a high-scoring offense in the Big Easy, Colston would help the Saints reach the top of the professional football mountain during 2009-2010 with the team winning Super Bowl XLIV. He would go on to another six years with the Saints before retiring after the 2015 season. When it was all said and done, Colston had written his name all over the Saints record books and is currently the franchise’s all-time leader in games played, yardage, yards per catch average, receptions, and touchdowns. 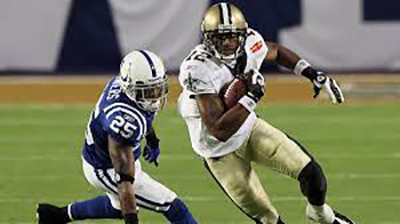 “Being drafted by the Saints when I did was a great experience because everybody [in the wide receiving corps] was really young,” Colston said. “It was a new offensive scheme. It was [Head Coach Sean] Payton’s first year. It was Drew Brees’ first year. Everybody was just young and fresh and it was a great chance to learn with not just some good players, but some great guys. Guys like Devery Henderson, Lance Moore, and Terrance Copper. It was a pleasure to grow with those guys and they became lifelong friends.”

Always forward-thinking, Colston had his eye on the future and his post-playing life even when he was in the midst of his stellar career. Starting in 2012, Colston began investing in ownership of indoor and arena football teams. By 2019, Colston had served as a minority owner in the Harrisburg Stampede, Philadelphia Soul, Albany Empire, and Atlantic City Blackjacks. Fueling his twin passions of football and entrepreneurship, Colston was confident that he would be able to continue his success off the field.

“I’ve always been somebody that has had an interest in business and been a builder by nature,” explained Colston. “I think being fortunate to have played with a couple of guys early in my career that has played the game and transitioned into business, seeing those guys do it in real-time kind of started my clock a little early. At the end of the day though, coming in as a seventh-rounder, you can have all of the confidence in the world that you’re going to play 10 years in the league, but you have to understand the numbers and realize you have one foot out the door. That allowed me to never be complacent and take things for granted.”

After retiring from the NFL, Colston dove headfirst into public speaking, founding startups, being a small business owner, and venture capitalist. These days, he has devoted himself to his two newest business endeavors, Kompete and Creating Separation. The former, a data analytics company designed to help find players that might fall through the cracks and get them into situations where they can succeed; and the latter based on Colston’s personal motto was created as an educational endeavor. He has been able to, in retirement, continue fueling his passions and his drive to compete. It is something Colston believes he will be doing for the rest of his life and he can thank the lessons he learned from football for helping pass this on to him. 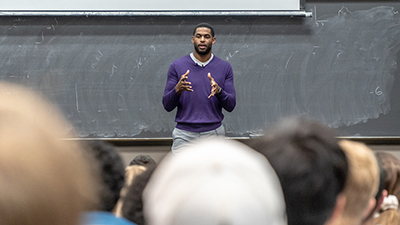 “I think the main thing that I lean on that I got from football is the need to continue to learn and develop skills and evolve,” he said. “As someone who played a really physically demanding position for 10 years, the things that I was able to do when I was 22 physically, I could not do at 32 when I retired. It was always about how I could evolve and continue to play at a high level. That mentality and that mindset, finding a way to create separation, has helped me in business. I constantly try to learn and sharpen my skills so that I’ll always be ready when the next challenge presents itself.”

Photos are courtesy of Marques Colston, the New Orleans Saints, and Hofstra Athletics.