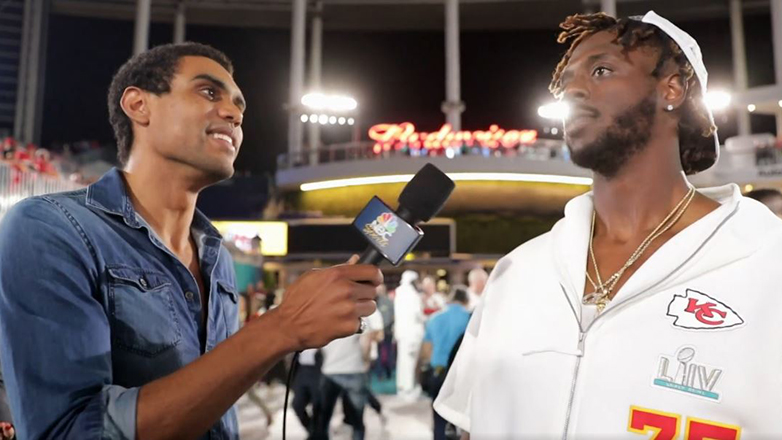 For some, the prospect of growing up in the metaphorical and, in this case, literal, shadow of a beloved, world-famous, all-time great athlete might seem daunting. However, for former Notre Dame wide receiver and current NBC Sports personality Corey Robinson, being the son of the Admiral has been nothing short of a blessing.

“The Robinson name, to me, is such an unbelievable honor to be able to carry it forward,” said Robinson. “I don’t think there is any added pressure in carrying it, though. My dad let us kind of choose our own adventure if you will. My younger brother [Justin Robinson] wore number 50 while playing basketball at Duke and that was way different than wearing number 88 with no name on the back of my jersey at Notre Dame. He let us find our own path to being excellent in life and in our communities. He wanted us to live lives of integrity, so other than that, there was no extra pressure to live up to his name.”

Growing up in the city where his father would become an NBA legend, Robinson was a stellar athlete. He wouldn’t get introduced to the sport that he would grow to love until his freshman year of high school at San Antonio Christian Schools. He got started in the sport out of a desire to play alongside his older brother. While he came to football relatively, he soon grew to both love it and excel at it.

“I loved all sports growing up, everything you could imagine like tennis, soccer, volleyball, basketball, all of them,” Robinson said. “My older brother was playing football in high school and I wanted to play with him. We never really got to play organized sports together. My freshman year, he joined, but he didn’t tell me he wasn’t playing, and I showed up to practice and he wasn’t there. The rule at our school was if you quit a sport mid-season you couldn’t play the next sports season, which was basketball. So, I had to stick it out and play and I ended up falling in love with it and the rest was history.” 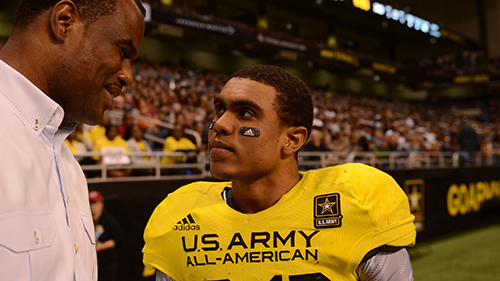 After a stellar junior campaign, Robinson would begin to gain the attention of several Division I programs. He would have an even better senior campaign, snagging 67 receptions for 1,414 yards and 20 touchdowns. In part due to this performance, he would be invited to the annual U.S. Army All-American Bowl, where he would take home the Glenn Davis Army Award (named for the former Army Heisman Trophy winner) that is given to players who epitomize the Army's high standards of excellence in community service, education, and athletic excellence.

Robinson would accept a scholarship offer to play for the Fighting Irish and would make an immediate impact as a freshman, playing in all 13 games and making three starts and catching one touchdown. His sophomore year, he would be named a starter at the beginning of the season and would finish the year with 40 receptions and five touchdowns. 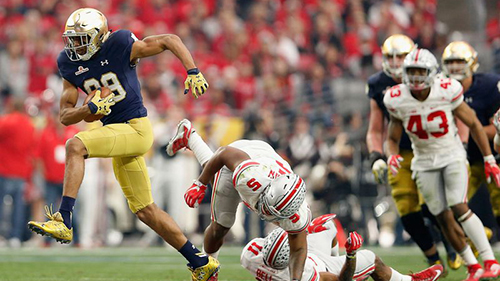 “Once you get on campus at Notre Dame, something about it just fills your heart,” explained Robinson. “There’s just so much tradition there. You can kind of feel the echoes when you’re there. Putting on the gold helmet, running through that tunnel, and knowing that every game is on national television, there was just nothing better. Every season I got there, we got better and better and pretty soon we were a top-five team and playing against other top five teams. For a kid from South Texas, even though I came into the sport a little late, that was a dream come true for me.”

Robinson would be forced to step away from the game following his junior year due to health concerns, but he was invited back to serve as a graduate assistant for his senior year. Getting the chance to help former teammates and coach future NFL players such as Chase Claypool, Miles Boykin, and Equanimeous St. Brown eased some of the pain from having to step away from the game he had grown to love. 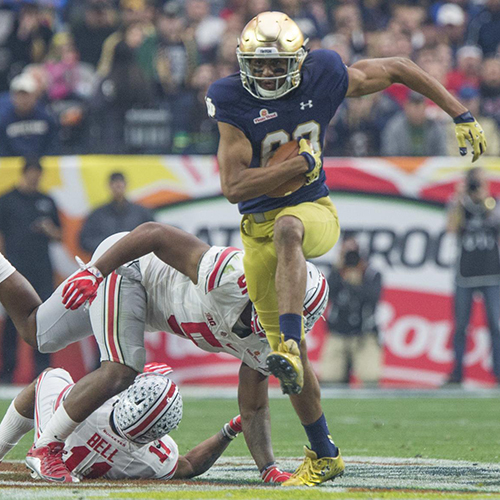 “It was really tough stepping away from playing,” Robinson said. “I loved Notre Dame and I loved my teammates, and football meant a lot to me. Thankfully, Coach Kelly invited me to be a coach on the team my senior year and that was something I had never even thought was possible. For me to be a student assistant and be around those football minds and still be around the team that I loved made things a lot easier. That whole senior year was a completely different experience.

He would take an internship in New York with Sotheby’s auction house and after a few more years, earned an opportunity to join NBC Sports. He now has been able to apply all of the lessons he’s learned on the gridiron to his new career. Being able to still be around football and sports has helped quench his competitive fires and has given him new goals to strive to achieve. 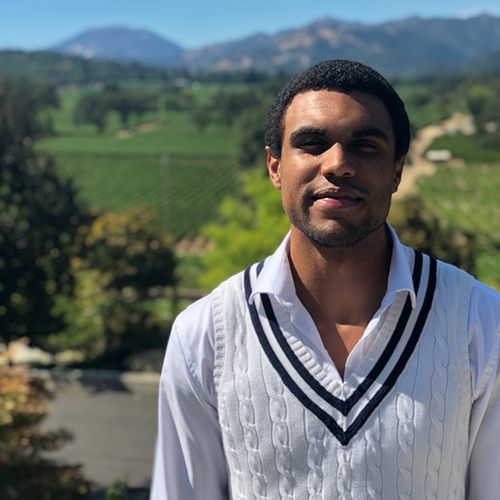 “The one thing football taught me above all else is to do your job,” he said. “When I was playing football, whether it was throwing a block or running a route, even if I wasn’t the first target I knew if I ran my route, I could help somebody else out. Or, in cases where I was the primary target, I have to do my job so we could get a first down or a touchdown.

“If you focus on doing the job, then you don’t get caught up in how big the moment can be. I think it’s the same thing now in broadcasting. If you studied, then you can just go out there and do your job. It doesn’t matter if you’re talking to one person or a million people, just do your job and everything will turn out fine.”