4th & Forever: Donnie Edwards – Don’t Talk About It, Be About It 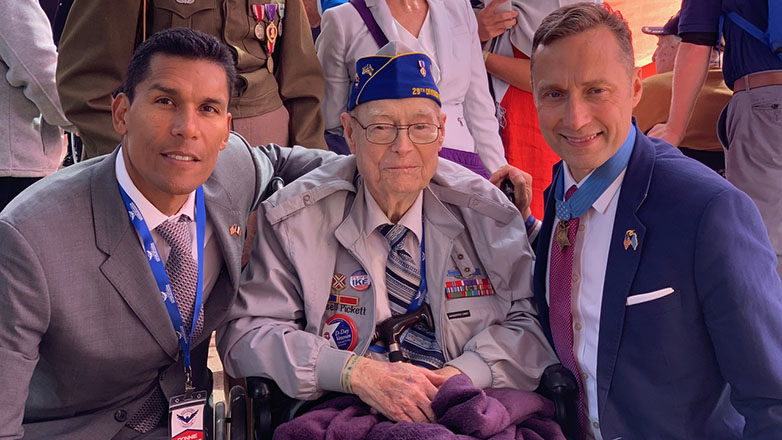 On the football field, Donnie Edwards was known as one of the hardest-hitting linebackers in the NFL during his two stints with the Kansas City Chiefs and one with the San Diego Chargers. The Chula Vista, California, native would rack up countless honors over the lengthy course of his playing career, including earning third-team All-American honors in college at UCLA and two second-team All-Pro honors while with the Chargers.

These days, since stepping away from the gridiron, Edwards channels all his seemingly boundless energy toward helping others. Since retiring following the 2008 season, Edwards has become a dedicated philanthropist, helping out numerous causes as well as devoting himself nearly full-time to his foundation. His dedication to others and his deep love and appreciation for teamwork and his teammates all began on those early days on the football field. 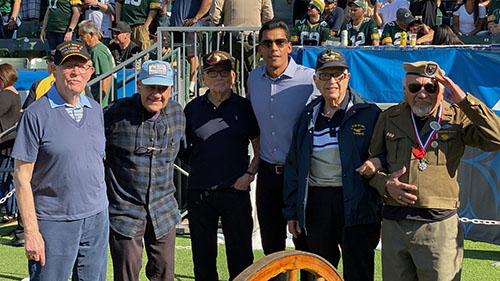 “I started playing football when I was seven years old,” Edwards said. “I started playing soccer at the Boys & Girls Club and I was really aggressive. I got a lot of those red and yellow cards. The coach suggested that I play tackle football to let off some of that aggression. As soon as I put on the pads, I loved playing. I also loved the teamwork aspect of it. When you get a group of people, all from different backgrounds, but all working toward the same goal, I found that to be something really special. When I started playing football and I realized this, I learned that when you get a group of people all working together anything is possible.” 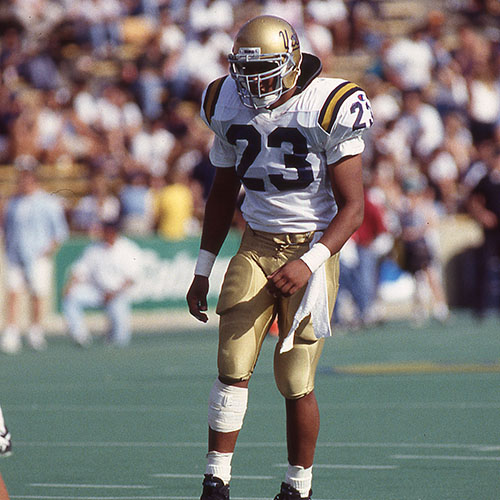 For much of his career, especially in the early years, Edwards was considered undersized for his position. However, his natural athleticism (Edwards would also play baseball collegiately as a first baseman and a third baseman his junior year) and boundless enthusiasm for the game would catch the eye of numerous college programs. While he appeared all set to go to San Diego State, a late-in-the-process offer from UCLA proved to be too good to pass up. He would make both an immediate and a lasting impact with the Bruins. When Edwards graduated in 1995, he left the school ranked third in tackles for losses and fifth in sacks. 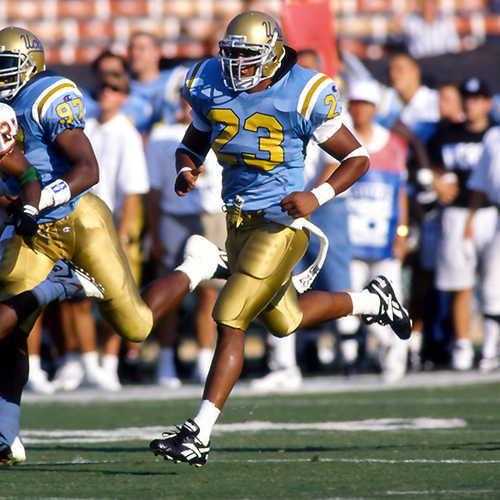 “One of my favorite memories of playing for UCLA was in 1993. We went to play USC in the [Los Angeles Coliseum] and it was pretty much going to be for the conference championship,” Edwards explained. “So, whoever won this game was going to go to the Rose Bowl and play against Wisconsin. I’ll never forget this game. It was neck-and-neck and the Trojans were getting ready to score and win the game.

“They’re at the one-yard line and our defense, we stepped up and stopped them on three straight plays. They went for it on fourth down and Marvin Goodwin picked the pass off to seal the victory. We went on to the Rose Bowl and played a great game that year. After we won that game, they had roses for us on the sideline and we celebrated with roses in our teeth, it was really cool. During my five years with UCLA, we never lost to USC.” 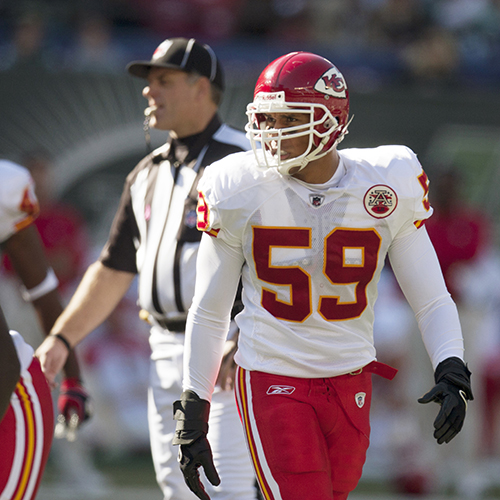 He would be a key cog on the defense for the Chiefs from 1996 to 2001. He would latch on with the division rival San Diego Chargers in time for the 2002 campaign and would experience a breakout year, earning All-Pro and Pro Bowl honors. When he wound up his career after returning to Kansas City for the 2007 and 2008 seasons, Edwards would have the rare honor of being a member of the 20/20 club on defense with 28 interceptions and 23.5 sacks.

“I never really had to have that college experience in L.A. like they do in the Midwest,” said Edwards. “At UCLA, you know, our stadium wasn’t on campus. So, it was a little different. When I went to Kansas City, it was kind of like that college atmosphere. I mean, you get 75,000 fans right on top of you. That home-field advantage was great.

“It was a great landing place for me. I had a tremendous amount of support from the city and the organization. I also played with some incredible group of guys. When I got drafted, Derrick Thomas was the one who picked me up. I mean, I had his jersey and now he’s picking me up at the airport. It was great to be around some incredible Hall of Fame guys at the start of my career.” 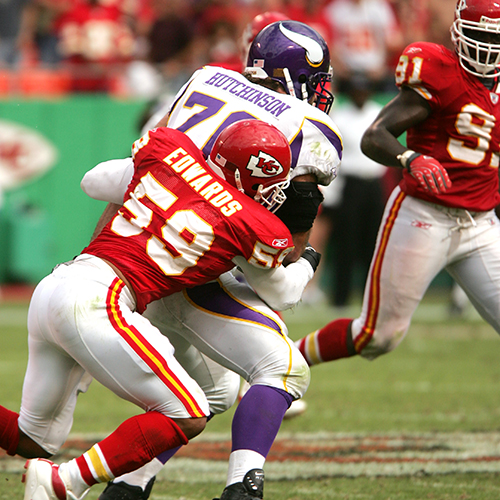 While still playing, Edwards would dabble with roles in the media, both co-hosting a local show in Kansas City and doing some work with the NFL Network. He was convinced that that would be the path he would take after his career was over, but a chance encounter with a World War II veteran greatly inspired him and led him to create the Best Defense Foundation. The grandson of a Pearl Harbor veteran, Edwards was inspired by the selflessness and heroism of veterans and knew he wanted to create an organization to honor and care for these unsung heroes.
The three main programs of the Foundation include the Battlefield Return Program, the Transition Program, and an educational program. Since 2018, Best Defense has taken over 100 WWII veterans on battlefield returns to remember their fallen comrades and gain closure. The transition program helps retired Special Forces operators return to civilian life and connect with the community around them.  The educational component teaches future generations about the sacrifices given by those who served. 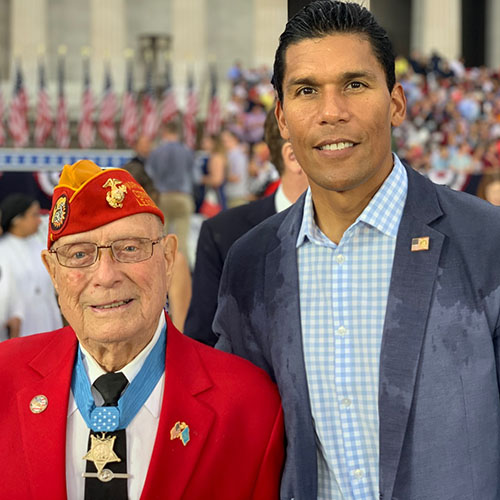 “Growing up without a father, my grandfather was really the one who helped raise me and he taught me that being born in America really gives you so many opportunities,” Edwards said. “You can achieve anything if you work hard. This Foundation is a tribute to him. I’m very fortunate to be able to have this platform to give back to the men and women who have sacrificed so much for us to have the opportunities that we have.”
After spending close to 30 years patrolling football fields every autumn, Edwards has now been able to successfully find a new passion in life. Not only does it allow him to honor deep family ties, but also has proven to be some of the most rewarding work he could have hoped for. Despite daily being pulled in multiple directions, Edwards has been able to lean into the foundation that football has paved for him. Thanks to his many years under the helmet, Edwards is prepared for whatever this next phase of life as a philanthropist has to offer him. 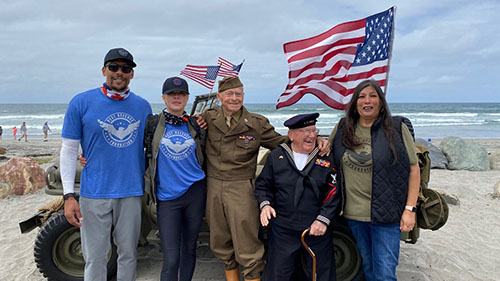 “Football and life are all about teamwork,” Edwards said. “My Foundation is all volunteer and I surround myself with people who are all interested in the same goal and that’s honoring the men and women who serve. My motto in life is don’t talk about it, be about it. My coach always told me don’t just talk about things, get them done. That’s how I live my life, that’s what I do with the foundation, and ultimately I think that’s how everyone finds success.”