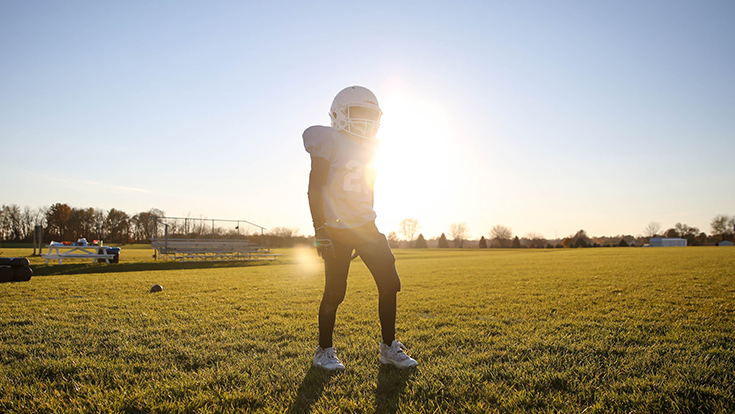 When people ask me when my favorite time of year is, the answer is easy.  It’s the fall because football season gets underway in September and then the next month is generally the start of hockey. So, when the calendar hits September 1st, it’s a happy time in our house. But this past September, there was no high school football it certainly created a big void for a lot of student-athletes including my son Bradley.

After months of wondering if there would even be a postponed fall season and, there was an unexpected but happy announcement from New York State Governor Andrew Cuomo on January 22nd saying that “high-risk” sports could resume on February 1st.

Bradley had been down in the dumps for months, but on March 1st he was on a football field for the first day of practice and on March 13th he played in his first high school football team.

But high school football in the spring? It was definitely something different, but it was a welcomed sight given what we’ve all been through in this country for more than a year. I was really happy for the seniors and their families because it meant that they were able to finish their high school football careers on the field and not wondering what could have been. I felt great for the coaches who dedicate their lives to the sport that they love and to help the student-athletes get better both on and off the field.

For my wife Sheryl and me, it took a little longer than expected. We were over the moon to finally be able to see Bradley play in a high school football game. I was actually asked to work the chains for Bradley’s first game, and I’ll always remember getting a call on my cell phone from Sheryl in the third quarter.

The chains were on the visiting side of the field so I couldn’t see what was happening on the home sideline but what she saw was Bradley practicing snaps meaning that he was going into the game at center. It was pretty special to see that moment and without a spring football season, it would have had to wait until the fall. And while it was strange to be at high school football games in March and April, at least the weather felt like it was the fall because there was appropriately a bit of a chill in the air throughout the six-game season.