4th and Forever: Carlos Alvarez – The Legend of the Cuban Comet 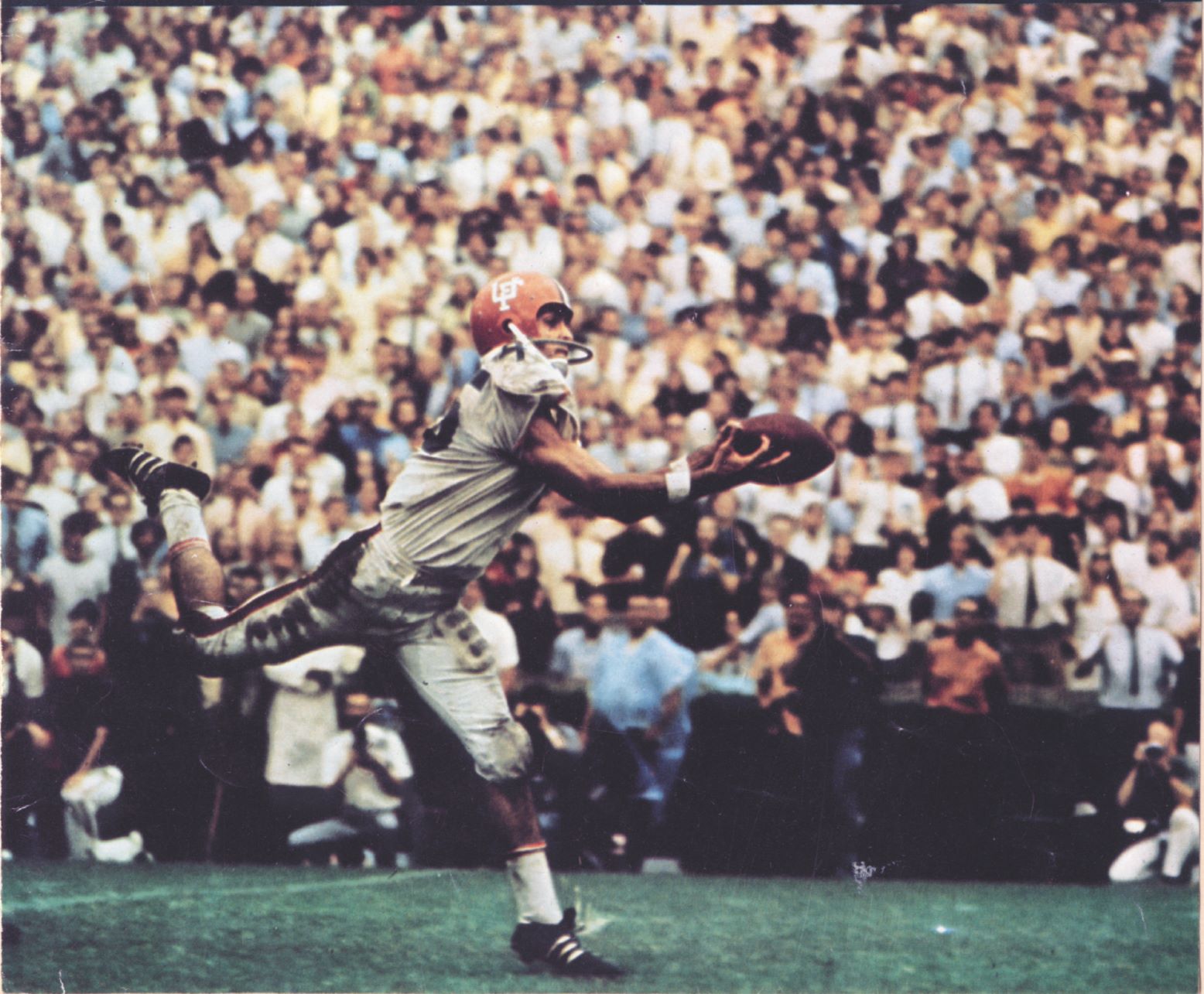 In 1960, future All-American wide receiver Carlos Alvarez fled to Miami, Florida, with his family to escape from the Communist revolution happening in their native homeland of Cuba. He got his introduction to the game of football shortly afterward when he began spending time at the local Boys Club. From that point on, the wheels were set in motion and they were heading toward creating the legend that would become known as “The Cuban Comet.”

“My family and I came to the U.S. in 1960 and it just happened that where we bought our house in North Miami was near a Boys Club,” Alvarez said. “They had three seasons each year, baseball, basketball, and football. I played baseball and basketball, but I just sat out football. My friends kept saying that I should play, but I didn’t know anything about the sport. When I was 11, I decided I’d try it. From then on, I played it every year.

“I pretty much fell in love with it almost right away. I’ve thought about this a lot, but what really fueled my love for it was my drive to become an American. I realized that football and not baseball, interestingly enough, was the true American sport. That first year that I played, I was the quarterback. I always had some speed and playing in the 95-pound-and-under group, you didn’t really need to throw the ball that much if at all. The first game we played, I had a touchdown the first time I touched the ball. There were ups and downs, of course, but basically, I fell in love with football right away.”

While attending North Miami Senior High School, Alvarez would gain attention as an all-county halfback. Renowned for his uncanny speed, Alvarez gained attention from numerous universities looking to add his talents to their teams. Ultimately, Alvarez opted to head north and follow in the footsteps of his two older brothers who were already enrolled at the University of Florida. In 1968, he would suit up for the freshman squad for the Gators and made an immediate impact, especially after making the switch from halfback to wide receiver. 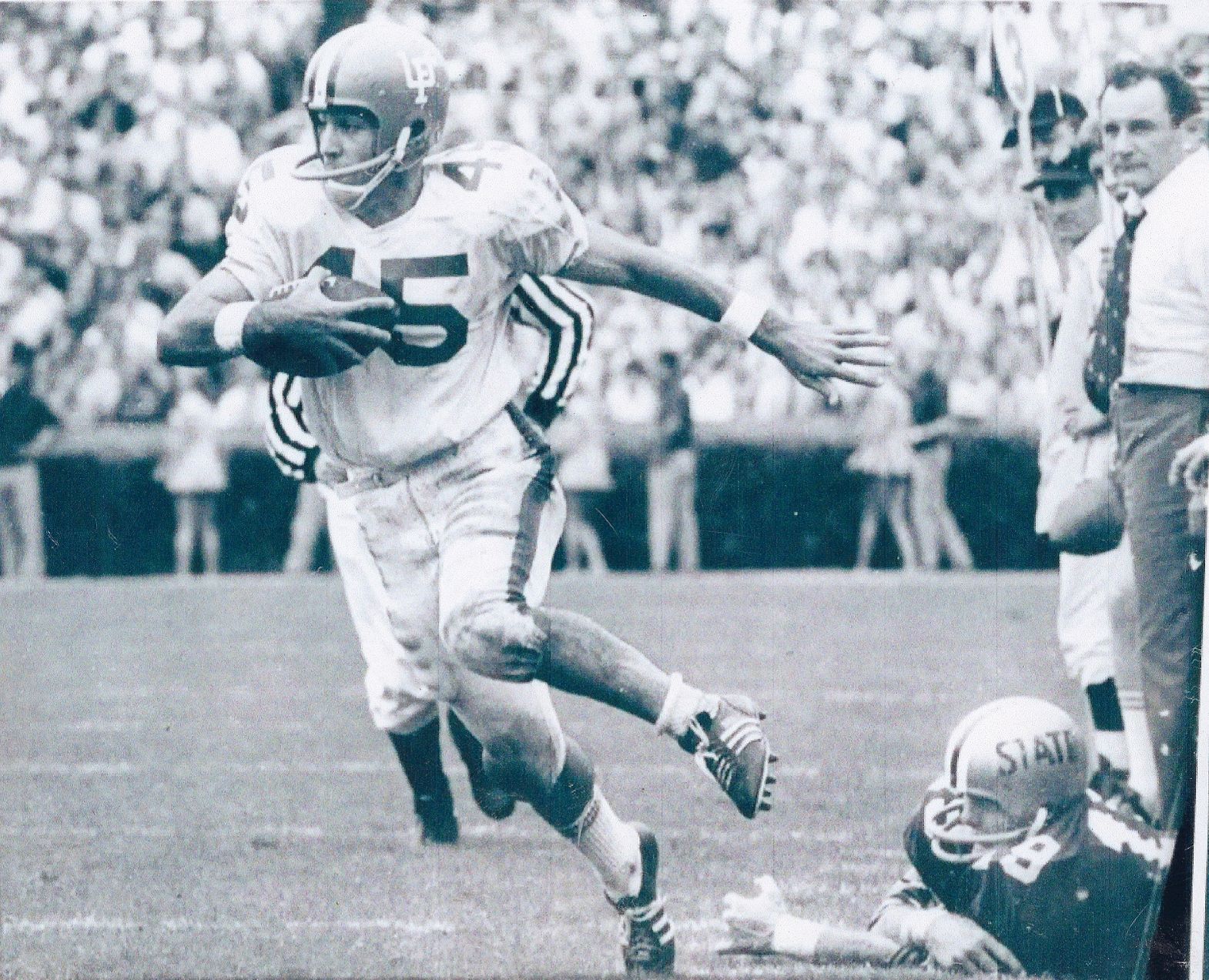 “Football, as a sport, is a struggle,” explained Alvarez. “It’s a physical struggle and it’s a mental struggle. But, it’s a struggle you do as a group and ultimately with  your friends. That’s what I loved about it all throughout my playing career, even when I got to the University of Florida. I can call my teammates from there even now, basically 50 years later, and feel like we’re there. There is a bonding as part of a team that I really, really enjoyed about football.

“One of the very good things that happened to me athletically was that I didn’t know how good you needed to be to play college ball. When I was playing, I was a running back at North Miami High and I was a good one. I was number two in South Florida in rushing. Until my senior year, I didn’t know you could get a scholarship by playing this. I was just playing because I wanted to be an American. I started getting offers from places like Miami, Georgia, Vanderbilt, and of course Florida. It shocked both my Dad and I that this was possible.

“Once I agreed to go to the University of Florida, I knew I wanted to be a wide receiver because I knew I wasn’t big enough at my size to play running back in the SEC. I asked my recruiter if I could try out at wide receiver and they agreed. So, that whole summer before going to campus, I worked out incredibly hard. I did everything I could to learn how to do the position because I was afraid I wasn’t going to make the team. Once I got on the field though that first day, I realized oh yeah, I can play here.”

In 1969, Alvarez would become part of a group of talented Gators that would go down in Florida lore as the “Super Sophs.” Alvarez would become the favorite target of fellow Florida legend, quarterback John Reaves. Together they would lead the Gators to their then best-ever record of 9-1-1 their sophomore season. It would be capped off with an upset win over the rival Tennessee Volunteers in that year’s Gator Bowl.

“To me, still the best pure drop-back passer in the history of the University of Florida was John Reaves,” Alvarez said. “I had met him at all-star game and I realized, my goodness, I’ve never seen anyone throw a ball like that. We got together that first day of practice and I knew we had something special.”

Alvarez would lead the Gators in touchdown receptions for all three years on the varsity squad. Among the accolades he would pile up during his time in Gainesville would be consensus first team All-American and All SEC honors his sophomore year. He still holds the Florida record for most catches in a game, most catches in a season, and is the school’s all-time leader in receiving yardage. He would start and end his career at Florida with touchdown receptions. He would be named a member of the Florida All-Century Team as well as inducted into the Florida-Georgia Hall of Fame, the Academic All-American Hall of Fame, and the College Football Hall of Fame. 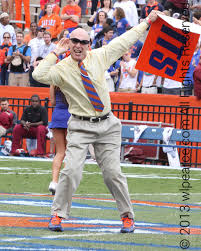 “I am so fortunate to have had so many great memories of my time at the University of Florida,” explained Alvarez. “Each of my three years had something special. Our sophomore year was really something special and we ended up having the best record ever in the history of Florida at the time. Our first game, we played the University of Houston and they had a really powerful offense. They had put up 100 points on someone and even against an SEC time like Mississippi State, they had put up 77 points on them. On the third play of the game, which was my first home game ever, we went deep and John hit me perfectly for a 70-yard touchdown pass.

“Our junior year, I caught two touchdown passes in our game against Georgia, which is always a big game for Florida. My senior year, we finished up our season in the Orange Bowl against Miami. We all jumped into the dolphin pool. That was a big game for me personally. I enjoyed just being with my teammates and that’s really my favorite part of being a Gator.”

A knee injury attributed to one sustained while playing basketball in high school significantly worsened over his playing career for the Gators. By the time his senior season finished, his speed had been virtually sapped away. He would be drafted by the Dallas Cowboys in the 1972 NFL Draft and was offered a contract if he could return to form. However, Alvarez had been accepted to law school at Duke University and he was ready to begin the next phase of his life.

“By the time I had left Florida, my knee wasn’t going to go anymore,” he explained. “I had developed an arthritic condition in there and I had to have three operations on it by the time I left school. Luckily, I got into Duke law school to start my legal career. I still had that dream of playing professional football when the Cowboys drafted me. They told me to give it a year and if I could run the 40-yard dash at the same speed as I did before my knee injury they would sign me. I worked out really hard, but I just couldn’t make it work, so I went to Duke.

“Football really prepared me for my career in law by helping to instill a sense of discipline,” said Alvarez. “Discipline means you’re able to schedule yourself, such as how you’re doing your workouts throughout the day. You can’t waste your time. You discipline yourself to accomplish goals. You take the steps you need to achieve your goal by planning out what is necessary. The discipline, and within that concept, is the ability to do the work you need to do is really how football helped prepare me.”

After graduating from Duke, he would become a law professor at Southern Methodist University. Ultimately, he would follow in the footsteps of his father and older brothers and open his own legal practice. He has been a successful, practicing attorney ever since and has had cases tried before the U.S. District Court for the Northern District of Florida, the U.S. Court of Appeals for the Eleventh Circuit, and the U.S. Court of Claims.

Still a die-hard Gators fan to this day, Alvarez knows that he was able to learn some foundational lessons playing the game of football and there are some that influence him even now some 50 years removed from the sport.

“Football is really great for teaching how to deal with life’s successes and failures,” Alvarez explained. “For example, an offense runs about 60 plays a game and a third of them or more are going to be failures. You have to just kind of regroup and do it again. In a way, life and your everyday experience is  like that.

“A lot of people falter and you just have to know that this is part of life and you have to keep going. I’m not the person who will say that everyone will get where they’re wanting to go in life, because that’s not true for everyone. I will say that, and this is the same with football, that when you lose, you learn something. Every single time, you learn something valuable from your losses that helps you later in life. Nothing is wasted in a loss if you learn from it.”