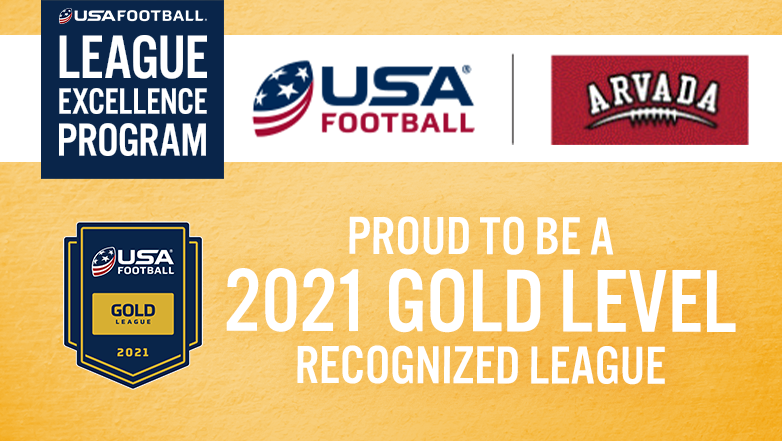 The League Excellence Program is a way for youth football organizations to earn recognition for a commitment to raise operational standards and provide a great environment for athletes and their families.

Arvada was formed as a non-profit, all-volunteer, community-based youth football organization and has served its community for over 50 years. In that time, the AYFA has set a consistently high standard in skill development and player safety as well a commitment to young athletes who grow from those standards. The club’s success comes from a fantastic group of leadership starting with longest active board member Ernie Francen, Board President Lynn Antencio Garry Gittins, and David Hollins who have been taken a major role in the success of Arvada Youth Football.  Josh Bliss, an age group coordinator for AYFA’s 5th-6th grade teams, has played a very important role for the organization in its success as both a coach and alumni of the club. Arvada is comprised of 429 kids spanning from grades one through eight.

In addition to player safety and development, the AFYA also has taken great pride in coaching certification and requires each of them to complete USA Football Coach Certification process and undergo a background check before stepping on the field.

“As our kids get older it’s important for us that our coaches are improving as well.” Bliss added.

The club has developed a great rapport with its local community over its 50-year existence. The AYFA has also garnered great respect from local teams as a club that knows how to run a youth football organization.

“We consider ourselves in the top tier, and we do that through the way we carry ourselves as an organization.”  Bliss said.

FINDING THE RIGHT LEAGUE FOR YOU

Trusting another set of adults with your child takes a leap of faith. USA Football’s League Finder helps parents find leagues nearby that are working hard to improve the athlete experience.

Find a league near you that puts athletes first.