U.S. and Mexico Flag National Teams meet for The Rematch at NFL’s Super Bowl Experience and look ahead to The World Games 2022 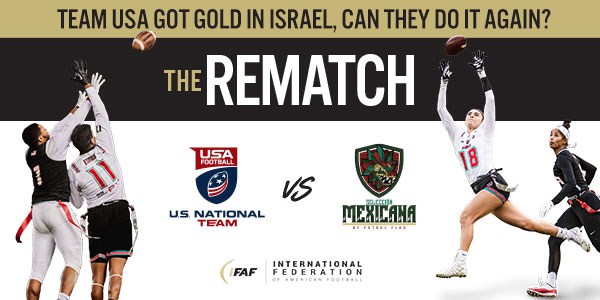 In December, the U.S. Men’s and Women’s Flag National Teams claimed gold medals at the International Federation of American Football (IFAF) Flag World Championships in Jerusalem, Israel. The wins both came in second half comebacks against Mexico’s men’s and women’s national teams. On February 6, the four teams will square off in The Rematch at the NFL’s Super Bowl Experience in Los Angeles.

IFAF, a provisional member of the International Olympic Committee, has 71 member countries, a family of nations that has increased more than 75 percent from just 15 years ago (40). The recent IFAF Flag World Championships drew a record number 39 men’s and women’s flag national teams (combined) from 22 nations.

In the championships’ thrilling Gold Medal Games, the U.S. Men’s and Women’s National Teams defeated Mexico’s teams 44-41 and 31-21 respectively. The men’s team grabbed its first lead of the second half with only 1:02 left in the game. Meanwhile, defensive adjustments led to the U.S. women’s team shutting out their opponents in the second half.

“I think internationally, it’s just a matter of time before every team gets on that level,” said U.S. Men’s National Team quarterback Eric Holliday of Argyle, Texas. “It’s gratifying to continually see each country get better and better, knowing that everybody is doing their part as far as getting the best talent.”

The NFL’s Super Bowl Experience hosting The Rematch offers a chance for the teams who played the most significant flag football games in recent history to capture attention for the sport on another international stage.

“A game like this shows that the sport is growing, not only domestically here in the United States but across the world,” said USA Football Managing Director of High Performance and National Teams Eric Mayes. “That’s important when you want to take the game to the next level like the Olympics or The World Games. We feel very proud of the growth of the sport, and we want to share that with those present at the Super Bowl Experience.”

Players for the 2022 U.S. Men’s and Women’s Flag National Teams will be determined by early March, ahead of The World Games 2022, which take place in Birmingham, Ala. this July. The event represents flag football’s first time appearing on a multi-sport, global stage and will feature 16 flag football national teams (eight men’s and eight women’s).

“I think it’s amazing,” said U.S. Women’s National Team quarterback and Carrollton, Texas resident Vanita Krouch of the sport’s growing stage. “It’s laying the path for younger generations to have higher levels of competition. Often times, they play and there’s nothing at the next level. Knowing that there are multiple platforms and a higher level to dream about and be a part of is great.”

Since 1981, The World Games have offered a global stage for sports, some of which later became Olympic events.

“Many of our athletes have been playing this game for many years and have been looking for an opportunity to showcase flag football on a higher profile stage,” said Mayes. “The World Games historically have been a launching pad for sports making it into the Olympic Games, and we, as a member of IFAF, think there is a very realistic opportunity for flag football to elevate in a similar manner.”