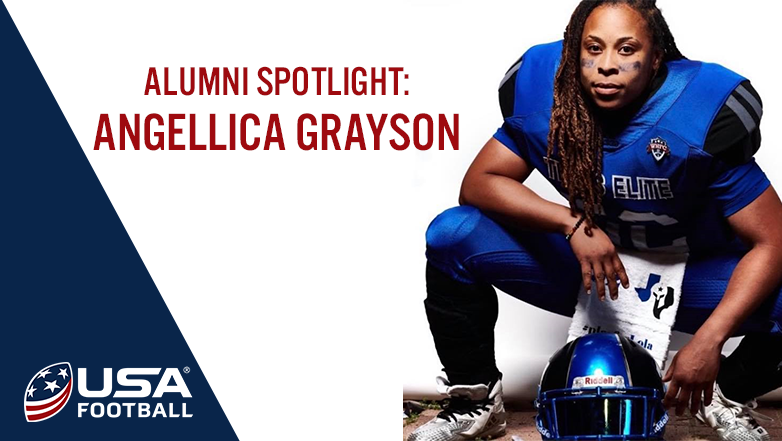 Below is the perspective of Angellica Grayson on these concepts, a USA Football National Team Alumni and member of the gold medal-winning 2017 U.S. Women’s Tackle National Team, as she looks back on her football career.

Angellica was born in Oklahoma and lived there for five years until she and her family moved to Crowley, Texas, a town right outside Fort Worth. She explains that her first encounter with tackle football was when she was going to college in the Atlanta area. A friend of hers took her to Atlanta Xplosion, a team in the Independent Women’s Football League. In awe of what she was seeing, Angellica recounted, “I remember saying and I quote I can do that and so when I remember saying that I made sure to eat those words and I'm still eating those words 13 years later. And for me, sometimes you just know something is right on the inside and you know that God doesn't give you anything that you cannot bear. However, we have choices, and so I still stuck with it. And I still chose to do something that I felt was beneficial, and so I would definitely say that playing has definitely been beneficial to me in my personal life and also in my career.”

What position(s) have you played during your career?
“So honestly, I have played linebacker even while playing flag football, but most people don't know that I actually started out as a quarterback, but quarterback was really not my thing. Hitting people is my thing. Come knocking you down I can knock your head off real quick. You know I'm a good ankle biter or shoestring tackler, I'm a good technique tackler, and so I've been playing linebacker for these last 13 seasons.”

How did you overcome not making the U.S. Women’s Tackle National Team initially?
“[In 2011] nonetheless I did not make the team and so one can say, well, you know I'm not going to try it anymore. They didn't pick me, but I didn't give myself excuses. I don’t allow myself to have excuses. I just said to myself, well, I'm just gonna have to get better and get noticed. I'm gonna have to do something during the season. I'm gonna have to continue to work hard and those are the things that I did. So, 2017 comes around to be chosen as one of the linebackers was a great thing. It was an ‘I did it’ moment. It was a perseverance moment for me.”

Why should people get involved in sports like football?
“Besides the teamwork, besides all those things, you learn a lot about yourself. I tell everybody the acronym ’FEAR’ which means you’re either gonna ‘Face Everything And Run’, or you're going to ‘Face Everything And Rise’. And so, I always make sure that I face everything and rise.”

Do you have advice for those trying to make the Women’s Tackle National Team this year?
“If you're nervous, you know it's gonna happen. You get nervous right up until the time it's time to go. I would definitely say get your mind together. We always say get our physical shape together but sometimes we forget about our mind, and I feel like if you get your mind together, then you'll be fine. Now will you make mistakes? Yeah, you will, you know you’ll do something where you’re like ‘Oh my God, crap, I hope they didn't see that!’ They probably did, but even though you made a mistake, a lot of the time the coaches are looking at how you respond to what you just did. Are you gonna go in and mess up again or you gonna go in and correct the mistake you just had? So, my advice is just go in with a strong mindset.”