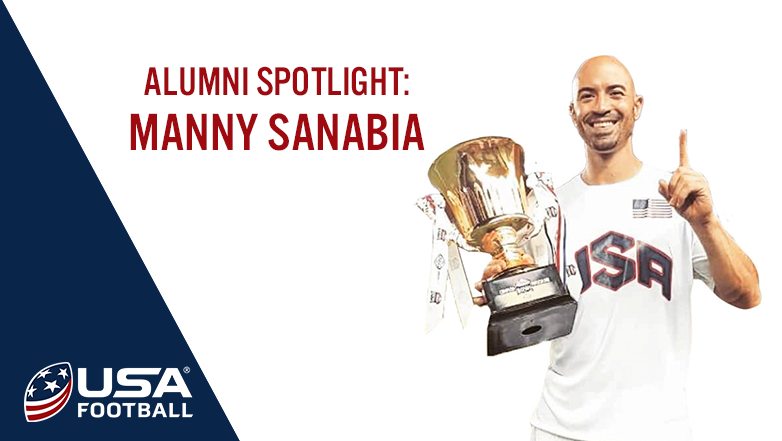 Manny Sanabia refers to football as “the biggest team sport” because it brings everyone together. He witnessed the game’s positive impact on the people around him as a member of the U.S. Men’s Flag National Team for several years. Sanabia began playing football more than 20 years ago. The game appeared in the 37-year-old’s life when he was a teenager growing up in Miami, where he still lives.

“At first it was a recreational thing I was doing with my brother,” Sanabia recalled. “He’s the one that brought me into the sport. My brother, who is five years older than me, needed an extra body, so I started playing with older athletes. At the time, he was in his twenties and playing in adult flag leagues. I started playing on Saturdays, and I enjoyed the camaraderie of it. That attracted me to the friendships you could build through football.”

Sanabia, who played wide receiver and safety for the gold-medal-winning 2014 and 2018 U.S. Men’s Flag National Teams, played tackle football early in his involvement with the sport. He put on the pads for Miami Killian Senior High School before playing some junior college football at Yuba College in Sacramento, Calif.

“Playing flag football made me a better tackle football player,” said Sanabia. “It made me quicker and harder to tackle because I had to be quicker for defenders not to pull my flag. There were a lot of beneficial things I picked up playing flag. The two games complement each other. Playing tackle makes you tougher on the flag football field, which comes in handy against higher levels of competition.”

“The entire event was amazing, but something stuck out to me. Everybody was divided at first,” Sanabia said. “All of the different national teams were separated, but as soon as the tournament ended, it was amazing how everybody came together. I still remember exchanging jerseys with the other teams and having a good time. All of the athletes crowded the field. I still talk to a lot of those people from Italy, India, and Japan. It’s crazy.”

“You’re always competing against great players in tournaments, and there’s a fine line there,” Sanabia said. “All of the sudden, you’re right next to each other, and you become teammates and friends because that line is gone. Those experiences are worth the effort of making the U.S. National Team.”

The U.S. Men’s and Women’s Flag National Teams will participate in The World Games 2022 this July in Birmingham, Ala. The event, which will include 3,600 athletes from more than 100 countries, represents flag football’s first time appearing on a multi-sport, global stage.

Sanabia spent 2021 coaching in the Women’s Flag Football Network. His So Cal Dogs went 7-1-1 and led the nine-team league with 223 points scored. The So Cal Dogs also had the league’s stingiest defense.

Sanabia isn’t coaching this year. For now, he’s content pursuing his passion as a personal trainer in Miami. “I wake up every day, and I don’t feel like I’m going to work,” he laughed. “I love it.”