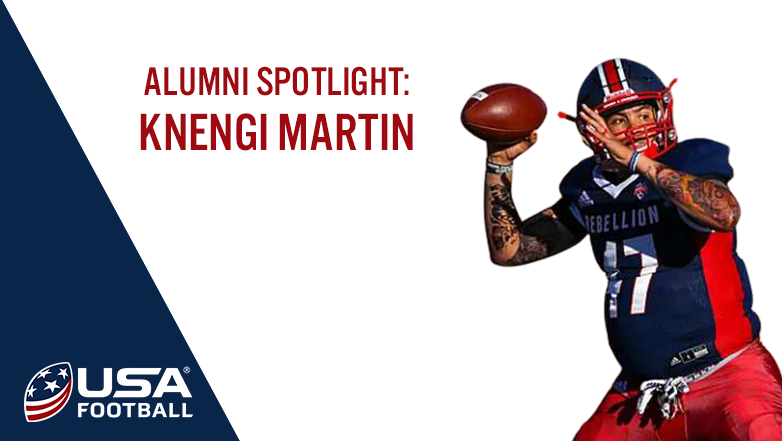 Below is the perspective of Knengi Martin, a U.S. Women’s Tackle National Team Alumni from the 2017 gold medal-winning team, as they reflect on their time with the team.

Knengi grew up in Palo Alto, California, later moved to San Luis Obispo, California, and has been residing in San Diego, California since 2012. They attended high school at Henry M. Gunn High School in Palo Alto. After high school, Knengi said, “As far as the college thing went, I did some Community College, but I wasn't really sure what I was doing with it. So, I'm now back in school working towards my degree in early childhood education, working towards a teaching certificate”.

What made you want to play football?

“I always was kind of a physical kid. I played ice hockey growing up. I did martial arts and you know, I remember driving with my mom past the high school and seeing the youth football Pop Warner team, saying I wanna do that, I wanna play. I got about half the season in of youth football but they decided that because I was so big for my age in the boys group that people didn't think it was a good fit so I didn't really get a chance to play youth football. When I moved to San Luis Obispo, I was out at some social thing and a woman approached me and said, ‘have you ever thought about playing football?’ And I was like ‘absolutely’ and she's like, ‘it’s women football, you should play’ and that's kind of where it got started.”

Have you faced any challenges or doubters during your career?

“I mean obviously like when I was little, everybody said that, you know, I probably shouldn't be playing with the boys who are two years older than me, just because of the weight and my football knowledge. So, I think that was the biggest one as far as coaching goes, it’s always kind of been that. Now, I've proved that I know football and so there's not really any room for people to criticize or to sort of try to push me out because I've always known at least as much as they do.”

What positions have you played during your career?

“So, I started as a defensive end. I played some fullback and some tight end. I played linebacker for probably the majority of my career, especially in 11-on-11 football. So that's where I won my defensive player of the year, I was playing linebacker for the San Diego Surge. You know, most of my All Stars have come as a defensive player. I had a couple as a tight end. Now this will be my fourth full season, I am playing quarterback.”

Do you have any advice for those trying out for the National Team this year?