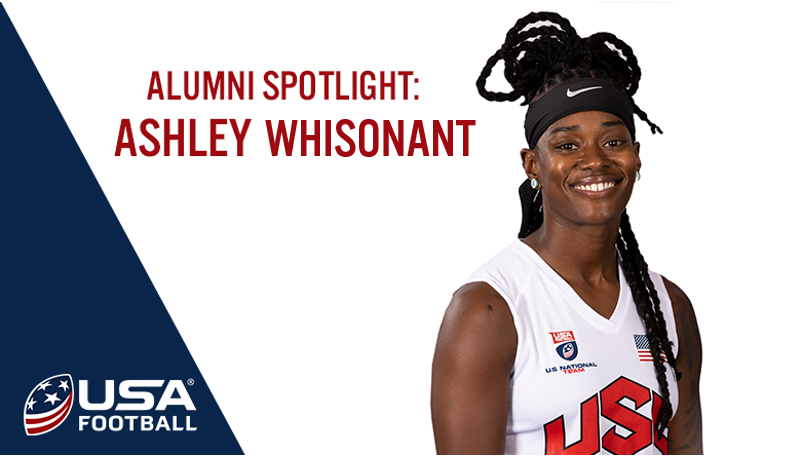 Below is the perspective of Ashley Whisonant, a U.S. Women’s Tackle National Team Alumni from the 2017 gold medal-winning team, as she looks back on her time with the team.

Ashley was born and raised in Maryland. She went to college at the University of Arizona where she played basketball all four years. After school, Ashley became a teacher and now lives in Woodbridge, Virginia, where she’s worked for the local fire department for the past nine years.

What made you want to play football?

So, I started off actually right when I was in college. I played tackle football. We weren’t very good. I do remember trying out for a team called the DC Divas, which is a tackle team, and I didn't really have any expectations of actually playing. I went to try out because my friend didn't want to go by herself, so I was like ‘Okay yeah, sure, sounds like fun’ and then loved it, like absolutely loved playing with them and have continued playing since then. So, I think that was in like 2011 when I first started playing tackle, seriously.

What position(s) did you play?

“Mostly I played receiver. I will play as defensive back like corner or safety sometimes depending on the game kind if they needed an extra.”

Did you face any challenges or doubters in your career?

“I explained to people like ‘hey I play tackle’ and they’re like ‘with pads?’ and I'm like ‘yeah.’ People were surprised that women played so that was just one of the things like not getting the recognition over the same respect that you know if a guy were to say he played tackle that you know that they will respect them in the same way.”

Why do you think other women should get involved with football?

“Women are just as aggressive as men. So, I mean, if you're allowing men to play tackle then I think you should also allow women to play to kind of get some of that aggression out that we have as well.”

Do you have any advice for those trying out for the National Team this year?

“A lot of people are afraid to try out because they say something like ‘I'm afraid that I won't make it’ or ‘I will fail’, but you will fail 100% of the time that you don't try. So just go out there, give it a try, and put your best foot forward. You never know what can happen.”

How has football enhanced your life?

“The relationships that I've built with every person on the team that I played with in 2017. I'm friends with them on Facebook. I see how their lives are progressing and we still communicate. It's just like I have good quality relationships because of playing football and that's one thing that I can cherish forever.”