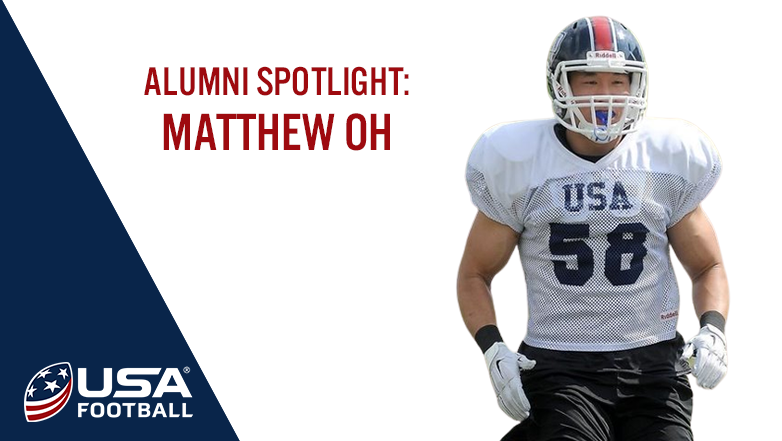 When he was in eighth grade, Matthew Oh declared he planned on playing football in college. His family was initially skeptical and suggested he stick to basketball. However, Oh’s dedication and passion for football made his dream possible. The Dallas native and proud alumnus of the 2015 gold medal-winning U.S. Men’s Tackle National Team recently shared his story with USA Football.

Oh credits his father, who immigrated from South Korea to Houston as a teenager, for fueling his love of sports. It was a strong bond the two shared, and one Oh still fondly remembers.

“The game of football helped me at a crucial time in my life,” Oh said. “My father passed away from liver cancer in 1999. He always worked the night shift, but even with his crazy work schedule he somehow found a way to be at practices and games. When he passed, I still felt like I was making him proud by playing. Football gave me an outlet to clear my emotions. At that time in my life, the game was therapy, and it gave me a sense of hope. It gave me a new community of friends. I became very obsessed with the game.”

Oh played linebacker and defensive end at Dartmouth College under head coach Buddy Teevens until he graduated with a bachelor’s degree in psychology in 2011.

After college, Oh built an impressive football resume that included spending preseasons with the Canadian Football League’s (CFL) Hamilton Tiger-Cats in 2012 and Montreal Alouettes in 2013. He also played for the Panasonic Impulse in the Japanese X-League in 2014 and the Florida Blacktips in the Fall Experimental Football League (FXFL) in the fall of 2015.

Oh learned about the 2015 U.S. Men’s Tackle National Team between his stint with the Impulse and Blacktips.

“I found out about the national team through head coach Dan Hawkins. I was in the CFL when he was at Montreal. That’s where we initially met. Several years later, I was coming out of playing in Japan’s X-League for the Panasonic Impulse. He contacted me and asked, ‘Hey Matt are you interested in playing for the national team?’”

Oh joined Hawkins, who coached the national team, as the U.S. battled to the gold medal match, where Oh encountered some familiar faces.

“I was coming off a year of playing for the Panasonic Impulse in Japan,” Oh recalled. “We made it to the world championship game and happened to play Japan. I got to play against some of my teammates from the X-League. I’m just thankful looking back on everything. I thought that was such a cool moment.”

After his time with the national team, Oh volunteered to serve on USA Football’s Board of Directors for 2016.

“I was grateful that I even had a career after college,” Oh said. “If there was any way that I could pay back the opportunity and experience to meet all of these really awesome people through the game of football, I wanted to help out. The two biggest topics we covered were heads up tackling and mitigating concussions at the youth level. It was great to serve on the board and contribute ideas that we could use to make the game safer.”

Oh is 33 years old now and five years removed from his playing days. He currently lives in Los Angeles, Calif., working in office tenant requisition for Stream Realty. Oh also works as an actor, model, and runs his own business, Ohmeals, which sells sustainable bamboo cutlery.

As an actor, Oh has found some familiarity to his time on the gridiron.

“There are a lot of similarities between football and acting,” said Oh. “The playbook and script are the same, and the field is like the stage. When you hear ‘Action!’ it’s like ‘Hut!’ You can react, listen, and play. I really started to enjoy the transition from real football to stunt football and from stunt football to actually playing on stage. It’s a very similar approach in terms of lifestyle and performance.”

Oh doesn’t wear shoulder pads anymore, but he still finds ways to incorporate the skills he spent 20 years cultivating as a football player into his career.