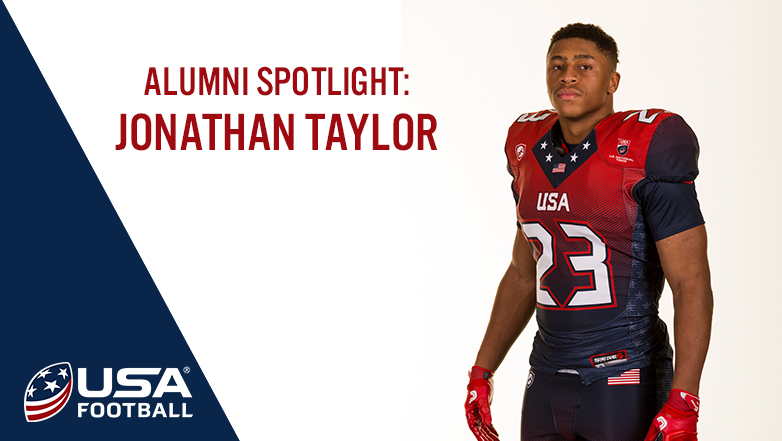 Born in Salem, N.J., Indianapolis Colts running back Jonathan Taylor is one of the NFL’s premier players, leading the league in rushing attempts, yards and touchdowns in 2021. His journey to the top featured many stepping stones on the pathway to success, including his participation with USA Football’s U.S. National Team program as a high school senior.

However, Taylor’s rise to stardom didn’t begin under the bright lights in Orlando. His football journey began with him chasing the opportunity to have fun with an older cousin.

“Up until fifth grade, my older cousin would always come outside and play with us when we were young. He stopped coming outside because he had to go to football practice,” Taylor said. “I finally asked my mom to sign me up to play because I believed football had to be fun if my cousin attended practice every day. Wanting to play with my cousin got me started in football, and then my love of the game started to grow as I learned how to play.”

Through his trials in high school and the college recruitment process, Taylor developed a mindset that allowed him to consistently rise above challenges and set new personal goals. It’s a mentality he recommends to young athletes.

Playing on the 2017 U.S. Under-19 National Team gave Taylor, a three-star recruit, the opportunity to make friends and meet fellow members of the 2017 college recruiting class.

“My recruitment started to pick up about the time I started playing for the U.S. National Team. I got familiar with the other really talented guys in that recruiting class, like D'Andre Swift, Chase Young and Laviska Shenault Jr.,” Taylor said. “USA Football gave me the opportunity to have a first-hand look at other guys I was competing with. After learning to compete with myself, I had the opportunity to see some of the top high school athletes in the country, and we were all on the same team. I had the chance to compete with and learn from them. For me, coming from a small school, it was an eye-opener. I would say practices were the best because that’s when we got to compete, and I saw other top high school athletes compete against each other.”

Taylor spent three years at the University of Wisconsin-Madison. He won the Doak Walker Award, given to the nation’s most outstanding running back, in 2018 and 2019, joining Darren McFadden from Arkansas and Ricky Williams from Texas as one of only three players to win the award twice.

The Colts selected Taylor with the 41st overall pick in the 2020 NFL Draft. In 2021, he followed up a 1,000-yard rookie campaign with 332 carries, 1,811 yards and 18 touchdowns on the ground and 40 receptions for 360 yards and two touchdowns through the air. In recognition of his efforts, the Associated Press selected the 23-year-old as a First-Team All-Pro.

From seventh grade to the NFL, football has helped Taylor learn many lessons which he hopes to pass on to young athletes.

“Football showed me at every level that everyone is dealing with something, and that extends beyond the game. You could be on the field and not feeling the best because you’re tired, but everyone is working and dealing with something,” Taylor said. “Football has taught me that no matter your situation, you have to be willing to fight through adversity because everyone is fighting through some kind of adversity. That’s one of the biggest lessons football has taught me over the years.”