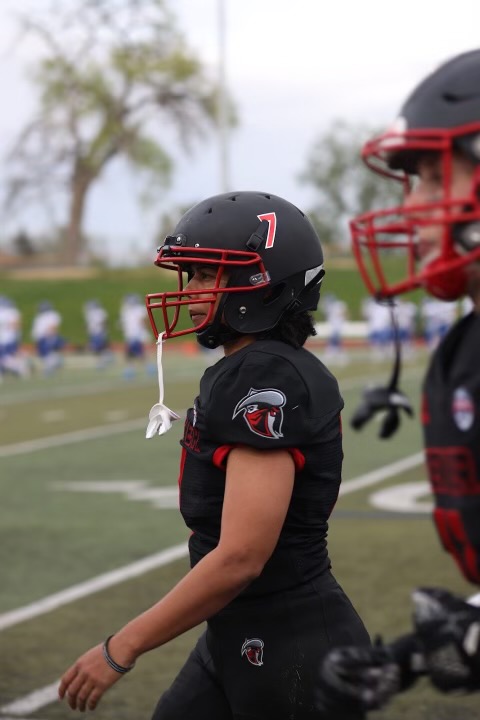 Nicole Matheson is a current women’s tackle football player for the Denver Bandits and has been playing tackle football since 2015. Growing up in Tacoma Washington, she has always led an active lifestyle. Nicole has allowed athletics, especially football, to bring a positive light in her life.

Below is her perspective and journey that has brought her to football.

Nicole has always been very active throughout her life. She grew up playing soccer, softball, basketball, and running track and field. Although she was extremely active in athletics, she has struggled with coordination which created an obstacle for her success on the field. Regardless of this struggle, she has always loved the competitiveness of team sports and football has opened a doorway for her to fit in and excel. Through this love for sports, she learned how to persevere when faced with past challenges in all aspects of her life. Matheson’s perseverance and curiosity pushed her to seek out football as an opportunity for fun and a new challenge. She tried out for the Chicago Force to make friends in a new city, and this drove her to improve and develop as a football player.

Matheson has had the opportunity to play multiple positions on the field and on both sides of the ball those including cornerback, running back, safety and linebacker. She has also played for the Chicago Force, Wisconsin Dragons, Las Cruces La Muerte (New Mexico) and currently plays for the Denver Bandits. Looking back on all the positions she has played and teams she has played for, one of her favorite memories on the field is when she was playing linebacker and tackled a player from the other team not, realizing she had just sacked the quarterback.

Despite doubters and challenges in her career, Matheson has been able to be persistent in her goals and love for the sport. Matheson is also an advocate for the incorporation and growth of female involvement within football. She has seen the progress firsthand of women’s football especially with the involvement of sponsors like Vrye, Adidas and Riddell in the Women’s National Football Conference. These sponsorships have allowed for the growth in the women’s game through financial support. Yet, there are still hurdles with skeptics who compare the women’s football game to that of their male counterparts.

Matheson encourages young female athletes to get involved in football, whether it be flag, tackle or both. She has seen an improvement in schools incorporating flag football as a sport, more for females as it has been getting greater recognition. Matheson’s advice for those interested in getting involved with football, “Bet on yourself. There are going to be a numerous number of reasons, people and even self-doubt when wanting to try or become part of something that has historically has not made a space for you. If you want it, you’ll have to bet on yourself!”

Information on women’s tackle and flag football leagues can be found on the Women’s Football Alliance and the Women’s National Football Conference websites. At the age of 16, with parental consent, you can start playing in a women’s league.

Nicole Matheson has been able to overcome doubters and obstacles through hard work. She has pushed herself on and off the field and continues to be highly involved in growing female involvement in tackle and flag football.