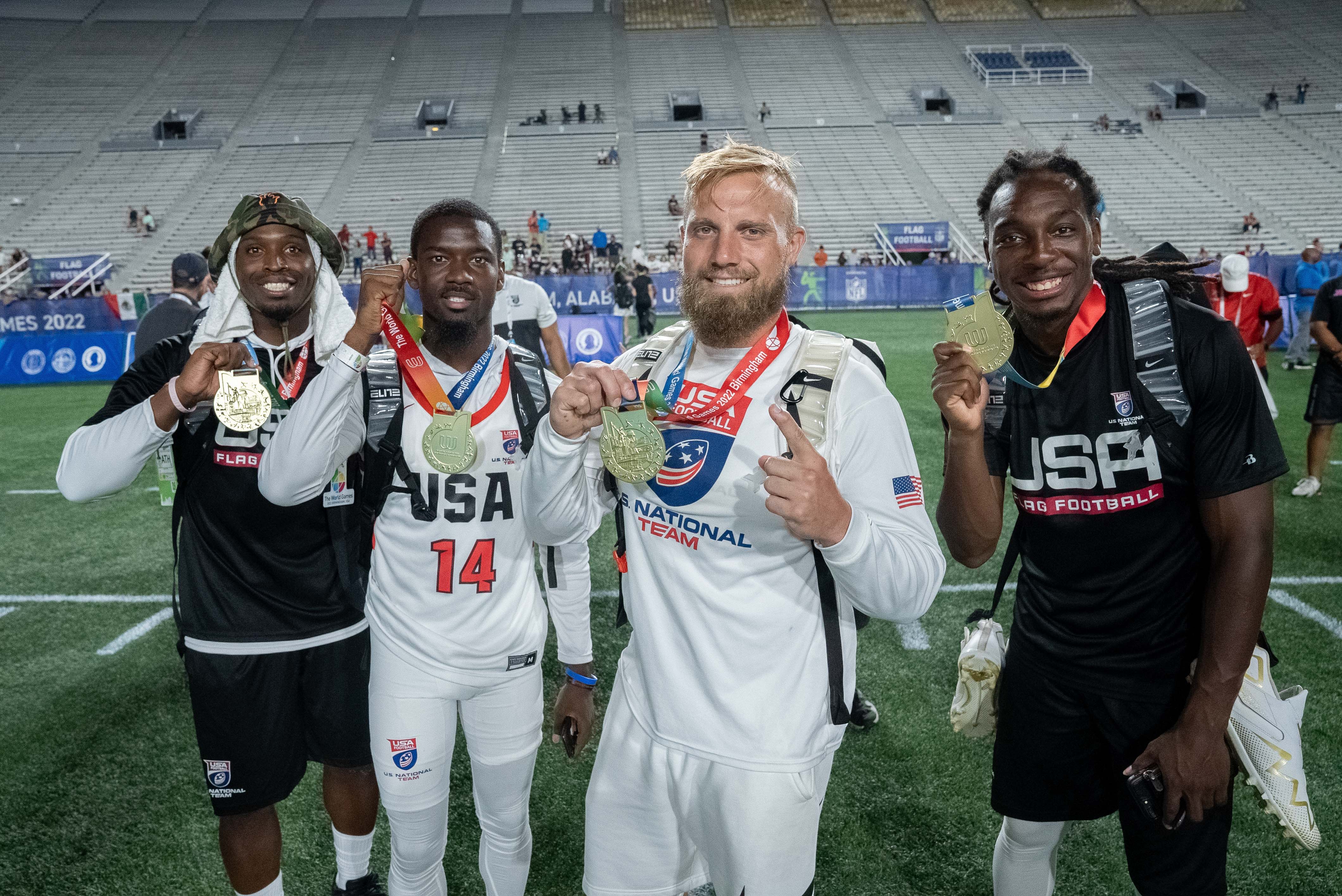 The U.S. Men’s and Women’s Flag Football National Teams played their way to gold and silver medals, respectively, at The World Games 2022 in Birmingham, Ala. Below is a recap of their five days of competition from July 10-14, 2022, against the world’s best national teams in flag at the multi-sport international event featuring more than 3,500 athletes from 100-plus countries.

Stretching all of her 5-foot-5-inch frame in mid-air with clutch hands for the game’s final TD catch, U.S. wide receiver JOANN OVERSTREET (Lewisville, Texas) helped lead the Americans to a 31-25 opening game victory against Panama. Overstreet led all receivers with 10 catches for three touchdowns and a one-point PAT conversion.

With the score tied 25-25 with 7:50 remaining in regulation, Overstreet pulled down the go-ahead TD with a toe-tapping catch in the back of the end zone on a critical 4th and goal play from the Panama 14-yard line. The catch was the United States’ only second half score after forging a 25-19 lead at halftime.

In the first half, U.S. quarterback VANITA KROUCH (Carrollton, Texas) sliced through the Panama defense on 16 of 19 passing for 4 TDs on the 50-yard flag field. The Panamanian squad tightened its grip in the second stanza, limiting Krouch to 8 of 15 passing with one TD, which was the game-winner to Overstreet.

Trailing Austria 21-20 with 54 seconds remaining, the U.S. Women hit paydirt on a fourth-and-goal play from Austria’s five-yard line on a left corner route deep in the endzone from VANITA KROUCH (Carrollton, Texas) to JOANN OVERSTREET (Lewisville, Texas) for a thrilling 27-21 victory to end the first of two days of Group play with a 2-0 record at The World Games.

Despite stopping Austria’s first two drives with interceptions by defensive backs MARY KATE BULA (Charlotte, N.C.) and ASHLEY WHISONANT (Woodbridge, Va.), the Americans trailed 14-7 at halftime. That’s when the U.S. Women’s Team got on track, outscoring Austria 20-7 in the second half.

A stifling defense with a dizzying rotation of laser-sharp quarterbacks propelled the U.S. Men to a 38-13 win against France in the Americans’ lone game of the day in Birmingham.

The U.S. Men scored TDs on five of their first six possessions to seize a 38-6 lead.

Explosive plays and a smothering defense spelled success for the U.S. Women as the Americans ran by France, 39-13, to reach a perfect 3-0 record in their four-team group.

One week removed from Independence Day, Chicago native and Houston resident CRYSTAL DANIELS provided fireworks for the U.S. offense, hauling in five receptions for a team-high 105 yards and two touchdowns.

The American women held a 13-7 lead midway through the first half when on a critical 3rd and 20 from their own 5-yard line, QB VANITA KROUCH (Carrollton, Texas) launched a rocket across the deep middle to Daniels for a 45-yard catch-and-run TD. The long-distance score, followed by a successful 1-point PAT put the U.S. ahead 20-7.

The French attempted to frustrate the U.S. defense with a slow-and-steady approach, completing 17 of their first 22 passes and going 23-for-33 passing on the day (69.7 pct.). However, most were within 5-7 yards, inviting the U.S. defense to put on a flag-pulling clinic and display quick-twitch pursuit.

Trailing 14-13 at halftime to Panama, the U.S. Men’s Flag National Team revved its engine and iced a hot Panama offense to pull away for a convincing 35-14 victory.

U.S. quarterback DARRELL “HOUSH” DOUCETTE (New Orleans, La.) led the team to three second half TDs on as many possessions while team co-captain and defensive back FRANKIE SOLOMON (Dallas, Texas) posted two second-half interceptions. Panama’s other two second half drives were stopped by a turnover on downs at its own 9-yard line and by the game clock as it hit triple-zero with the ball at midfield.

Panama led 14-13 with 50 seconds remaining in the first half when American defensive back JORDAN OQUENDO (Spring Hill, Fla.) made a critical play with blazing closing speed to bat away a soaring 34-yard pass in the U.S. end zone just before it would have landed in the arms of a Panama receiver. Without Oquendo’s TD-saving swat, the U.S. would have found itself down by at least seven points at the half.  U.S. co-captain and wide receiver BRUCE MAPP (Carrollton, Texas) caught two of Doucette’s TD passes, joining fellow receivers JOHNNY REMBERT (Miami, Fla.) and DEZMIN LEWIS (Melissa, Texas) who notched one TD apiece.

The U.S. Men (3-0) didn’t go shopping in the second of their two games on the day, but they found a “Price” they liked as center/receiver DAVID PRICE (Baldwin, Fla.) continually found the soft spot in Denmark’s defense to notch seven receptions for 76 yards and a TD in a 32-7 win to close Group play.

Denmark’s offensive strategy of short routes and milking the clock produced everything they wanted except points. The Danes assembled four drives of at least 6 plays, with 8 plays being the most possible in a single flag football possession. Three Denmark drives stalled at the U.S. 8-yard line or closer to the end zone, with another running out of gas on the U.S. 18.

Meanwhile, the Americans scored on their first five possessions, jumping to 20-0 lead before Denmark posted its lone TD of the game for a 20-7 halftime score.

Red jerseys worn by defenders on the U.S. Women’s team Tuesday resembled a brick wall in a convincing 32-7 quarterfinal victory against Brazil (0-4) while SHENEIKA ADGER-COMICE (Sun City Center, Fla.) caught 4 TD passes for the Americans. The win placed the United States (4-0) in semifinal action against Austria (3-1) with the winner advancing to Thursday’s Gold Medal Game.

The U.S. defense allowed Brazil to cross the 25-yard midfield a scant two times in its seven possessions. Brazil’s lone TD came with 13 minutes left in the game, cutting the U.S. lead to 26-7.

U.S. QB VANITA KROUCH (Carrollton, Texas) finished her day with a glittering passing line: 17 of 23 for 190 yards and 5 TDs.

The U.S. Men’s Flag National Team advanced to semifinal play by a July 12 withdrawal from The World Games of the German Men’s Team after five positive COVID-19 cases were found within the delegation, including three athlete cases. The Americans advanced to face Austria (3-1) in semifinal play.

For the third time in five games in Birmingham, the U.S. Women came through with late heroics to pull-out a heart-stopping victory. This time it was a 36-32 come-from-behind (twice) win over Austria (3-2) to advance to the Gold Medal Game against Mexico.

Behind the laser-sharp passing of QB SASKIA STRIBRNY, Austria’s offense was a problem for the U.S. The relaxed drop-back passer was 8-of-12 passing with 2 TDs before the U.S. recorded a first down, jumping to a 13-0 lead. QB VANITA KROUCH (Carrollton, Texas) then responded with five consecutive completions, three going to WR SHENIEKA ADGER-COMICE (Sun City Center, Fla.), including a 3-yard TD pass.

Down by 10 with 10 minutes left and no margin for error, Krouch blistered Austria with five consecutive completions, the fifth being a 6-yard TD pass to WR JOANN OVERSTREET (Lewisville, Texas) to cut the U.S. deficit to 32-28.

The U.S. had the Legion Field crowd on its feet when it took the lead with 2:00 left in the game as Krouch reared back from the U.S. 12 for a deep corner route to her center, DELIAH AUTRY (Tampa, Fla.). Autry broke open on the out route, catching the ball in stride at the Austrian 15 and kept her balance on a tightrope down the sideline for a TD and a 35-32 lead, which was extended to 36-32 on a successful 1-point PAT for the game’s final score.

A race car powered by jet fuel driving downhill would have struggled to keep up with the U.S. Men on this night. The Americans were fast and on-point in a 54-19 semifinal win over Austria to face Italy for The World Games’ first goal medal in flag football.

With the U.S. ahead 14-7 midway through the first half, U.S. DB AAMIR BROWN (Philadelphia, Pa.) drew the first turnover to loosen Austria’s wheels. Brown notched his first of two interceptions on a 1st-and-20 play from the Austria 5-yard line when sprinting to make an over-the-shoulder catch 45 yards downfield in the U.S. end zone. The Americans converted Brown’s pick into a TD when QB DARRELL “HOUSH” DOUCETTE (New Orleans, La.) completed an out route to WR JOHNNY REMBERT (Miami, Fla.) on the Austrian 7 where Rembert evaded two defenders and bounded over the goal line. Followed by a successful 2-point PAT on a 10-yard Doucette rush, the U.S. went ahead 22-7. Austria responded with a 6-play TD drive to trim the U.S. advantage to 22-13 with 2:50 left in the first half but would get no closer. The U.S. drove to a commanding 36-13 lead at the half.

The Mexican Women’s Flag National team did everything right in a rematch of the 2021 IFAF Women’s Flag World Championship title game to defeat the United States, 39-6, for a gold medal at The World Games.

The United States appeared to have gotten off to a hot start on the game’s first possession, scoring on a deep pass from quarterback VANITA KROUCH (Carrollton, Texas) to wide receiver CRYSTAL DANIELS (Houston, Texas). The play was wiped out due to a U.S. penalty, however. Making matters worse, Krouch’s next pass was intercepted and returned 13 yards for a TD to give Mexico a quick 6-0 lead. Mexico would sack Krouch in the endzone on Team USA’s next possession, extending its lead to 8-0 en route to a 27-0 Mexico advantage at the half.

The Americans’ offense was unable to break the goal line until its final possession of the game when Krouch capped an eight-play drive with a short TD pass to NADIA BIBBS (Houston, Texas). Receiver JOANN OVERSTREET (Lewisville, Texas) was a big part of the drive, hauling in two of her team-high four catches to get things started.

Mexico QB Diana Flores finished the game with 20 completions on 28 pass attempts for 210 yards to go with four TD passes.

The U.S. Men’s Flag National upended Italy 46-36 in an air show of a gold medal showdown.

The score was tied at 24 at halftime when both national teams paused to catch their breaths with both offenses having their way. The U.S. continued its offensive prowess after the break when QB DARRELL “HOUSH” DOUCETTE (New Orleans, La.) Doucette completed a 45-yard touchdown pass to LAVAL DAVIS (Jacksonville, Fla.) on the first play of the second half and added a two-point PAT for a 32-24 lead.

U.S. defensive back JAMES CALHOUN (Riverside, Calif.) help the Americans stop Italy for the first time with an interception on the Italians’ second drive of the second half. Calhoun’s timely turnover ended a stretch of ten consecutive scoring drives on the night and kept the U.S. ahead 38-30 with 7:47 left to go.

The U.S. offense continued to hum with Doucette’s hot hand on the wheel. The American quarterback finished the game with 10 completions on 12 attempts for 190 yards, four touchdowns, and an interception. He also used his legs to reach the end zone on a 14-yard rush.

Italy had no answer for the U.S. offensive lineup when Doucette and fellow quarterback LADERRICK “PABLO” SMITH (Pompano Beach, Fla.) entered the game, especially on 2-point conversions. The U.S. dominated on conversions, completing five of their six attempts while stopping the Italian National Team on all six of its tries.

About USA Football: USA Football designs and delivers premier educational, developmental and competitive programs to advance and grow the sport. As the sport’s national governing body, member of the U.S. Olympic Committee and organizer of the U.S. National Team for international competition, USA Football partners with leaders in medicine, child advocacy and athletics to support positive football experiences for youth, high school and other amateur players.