Journal of a Youth Coach: Keep football fun with your child at home and learn through small-sided games 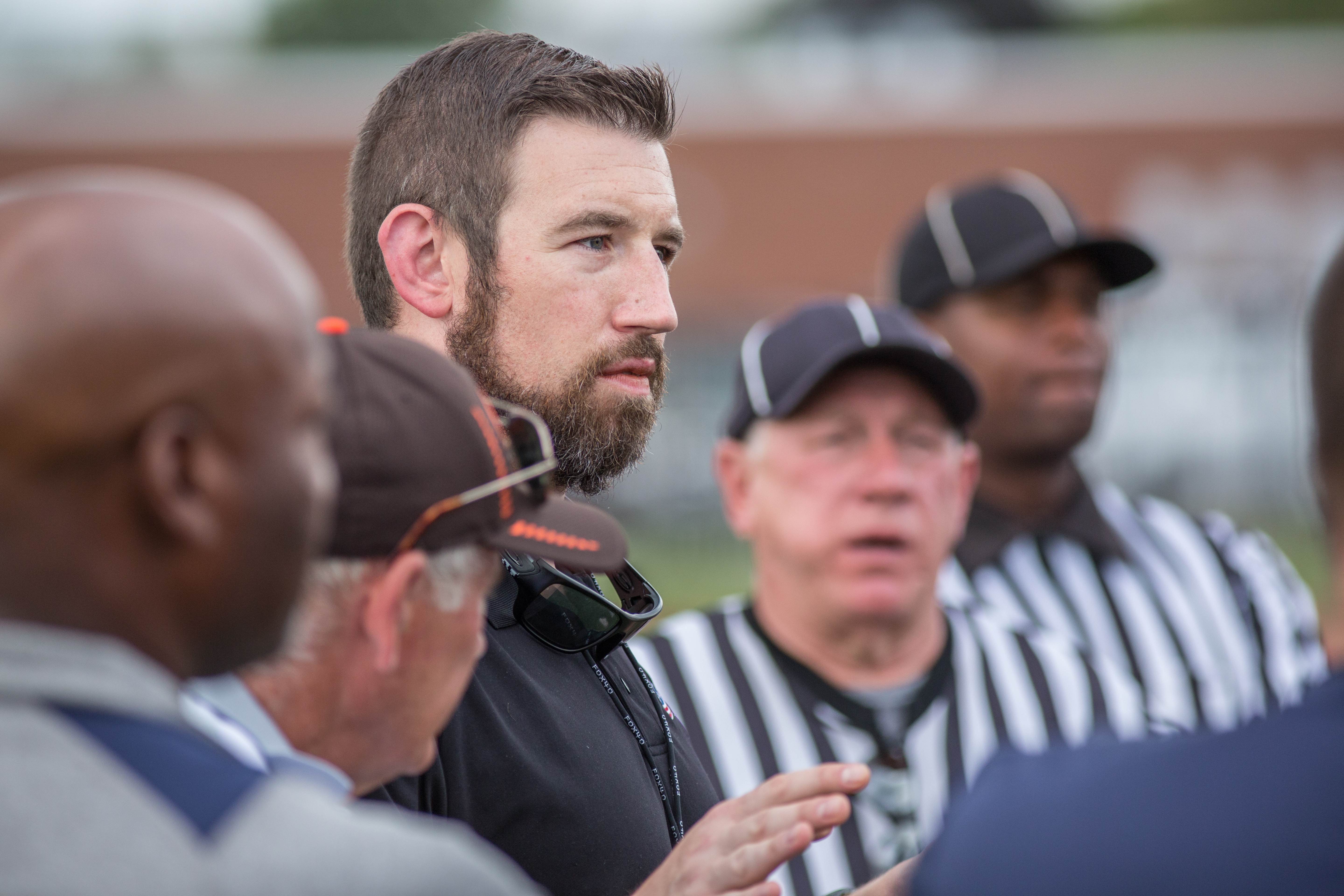 USA Football Senior Manager of Education and Engagement Andy Ryland (pictured above) recently volunteered to be an assistant coach for his 8-year-old son's Rookie Tackle youth football team. A former Penn State linebacker and member of the U.S. Men’s Rugby National Team, Ryland is an expert on tackling and preparation for contact with athletes, consistent with USA Football's Football Development Model. He also assists coaches of all sports in areas of drill design and skill development. This series of journal entries chronicles his family's 2022 youth football experience.

So many things happen at each practice, this blog could be the length of War and Peace. With a coach’s eye and strong opinions, I could go deep into so many little things in this series. To manage length and make this readable, I tend to focus on one or two big things in each article. I normally do something that’s drill-design or technique-oriented plus something about kids, leagues, operations or being a parent.

Last episode had the big car ride moment. Today, we were better.

My son walked off the field happy and feeling much better! That brings up an interesting little nugget – we did some non-practice day work at home.

How to manage that without being the overbearing parent is interesting. We made sure to ask, “do you want to work with Dad?” and “Do you want to work on tackling?” When we got a positive answer, he and I went into the matted garage and did some grappling, talked a bit about some key points and had him practice a few tackles on Dad. The funny thing is, aggression and power are never an issue with Dad (or younger sister), but on the field with ‘others’ that aggression fades.  Maybe it’s about comfort and being afraid of the outcome that makes it an issue. I just find that really interesting.

We had a better practice and are in a much better mood. However, this is not some magic fix. I am positive that we’ll deal with it for the entire season, meaning you will probably get many more updates. Kids evolve.

We had the full complement of teams at the field for today’s practice. Not every team started practicing on the same day that we did, so we went from sharing the space with three other teams to nine!

This setup allowed me to see a lot of other coaches. I saw the standard huge lines with every kid and the coaches standing in huge lines, doing the same drill. Lots of stops to lecture what the kids were doing, two reps that might not be up to standard, and then another stop to lecture. Limited reps.

I contrast this to how we ran things. My head coach split the kids into two groups and we had two stations. He took blocking, I took tackling. So we had much more activity and many more practice reps. We also both seem to naturally tend to let things play out a bit and try to get the kids to learn. We both offer coaching points and corrections but let the kids sort it out more than what I observed on other fields.

If you have done a good job teaching and explaining it, more lectures usually aren’t what’s needed. The real issue is that you have a first-year player learning how to take that idea you’ve provided and put it into movement. That takes reps.

Unless there is a safety violation or something dangerous, most times getting into the reps and solving the problem via movement, exploration or exposure will be way more effective than another lecture.

We have a scrimmage next weekend, so we layered in some play(s) with the technique practice.

Now for an interesting discussion: When is an “Oklahoma-ish” drill a good and useful Small Sided Game (SSG), and when is it bad?

Literature tells us SSGs are one of the strongest and most important teaching/learning tools we have as coaches. They allow athletes to connect technique to real situations and environments where they will use their techniques. This helps transition from technique to skill because it requires the following: processing, reading the game, timing and a choice of technique to accomplish the goal.

One of the other major benefits of SSGs is that a quality coach can match the environment by manipulating the space and numbers. We can make environments big enough to stretch some skills or apply technique in real situations but not overwhelming to young learners. We can control the amount of chaos or amount of information the players have to sort through via numbers.

This is good teaching and valuable learning because it brings the game “to their level.” I use the analogy that “a good SSG is a piece of the pie, not a single ingredient.”

Sometimes a drill for a movement or technique is an ingredient that will be used in the context of a much more nuanced environment (the pie). For new learners, they may not be ready to eat the whole pie but need more than a singular ingredient.  they need a small slice- the full game but scaled to their level. This allows some crystallization of what they learned and prepares them to take it to the most expansive environment: a full game.

So how was the SSG structured and what made it ok (in my eyes)?

From the outside, it may have looked like an Oklahoma drill, but things have layers deeper than the surface. We set out a channel, used cones to make a small space and put seven players, four from offense and three from defense, into the channel. They had a run play where they tried to score a touchdown and stop an opponent.

What makes that NOT an Oklahoma drill? When you look through the names of banned drills from contact limitation documents, you should see some key points and objectives that make a drill legal/illegal. One of these items is that the drill should have “schematic relevance.”

For the Rookie Tackle game, there are three offensive lineman and two defensive linemen plus a linebacker. That means our setup was an exact replica of game play, with real alignments. Not just lining up players one-on-one in head-up positions to smash.

A second quality of illegal drills is that they don’t allow players the opportunity to win with speed or movement. Creating a drill where players must win via force and power obviously impacts the number, intensity and density of contact. When the drill is all aligned head-up, too many players are involved, or the drill takes place in a small space, the only way to win is with force. This leads to players “teeing off” as they know that is the only option.

By adjusting the space and the size of the channels and gaps, players can win with force or movement. This means that players on both offense and defense have to balance the dual threats of movement and force – just like in a game. The goal of our drill was to see who could see and read blocks and holes. The goal was NOT to smash for a yard on the goal line.

This means players had space, time and opportunity to cut to open grass. This serves two purposes: It allowed us to evaluate players but also let everyone play football on a tiny field. This makes things more game-like (“piece of the pie” analogy) while not being too restrictive and forcing contact.

I hope this gave you a little insight into how I think about drills. It’s proper understanding and proper programing to allow the right use at the right time of the right variation.

Here’s hoping the boys do well in the scrimmage. I’m looking forward to it!