The methods and importance of teaching tracking: Part one 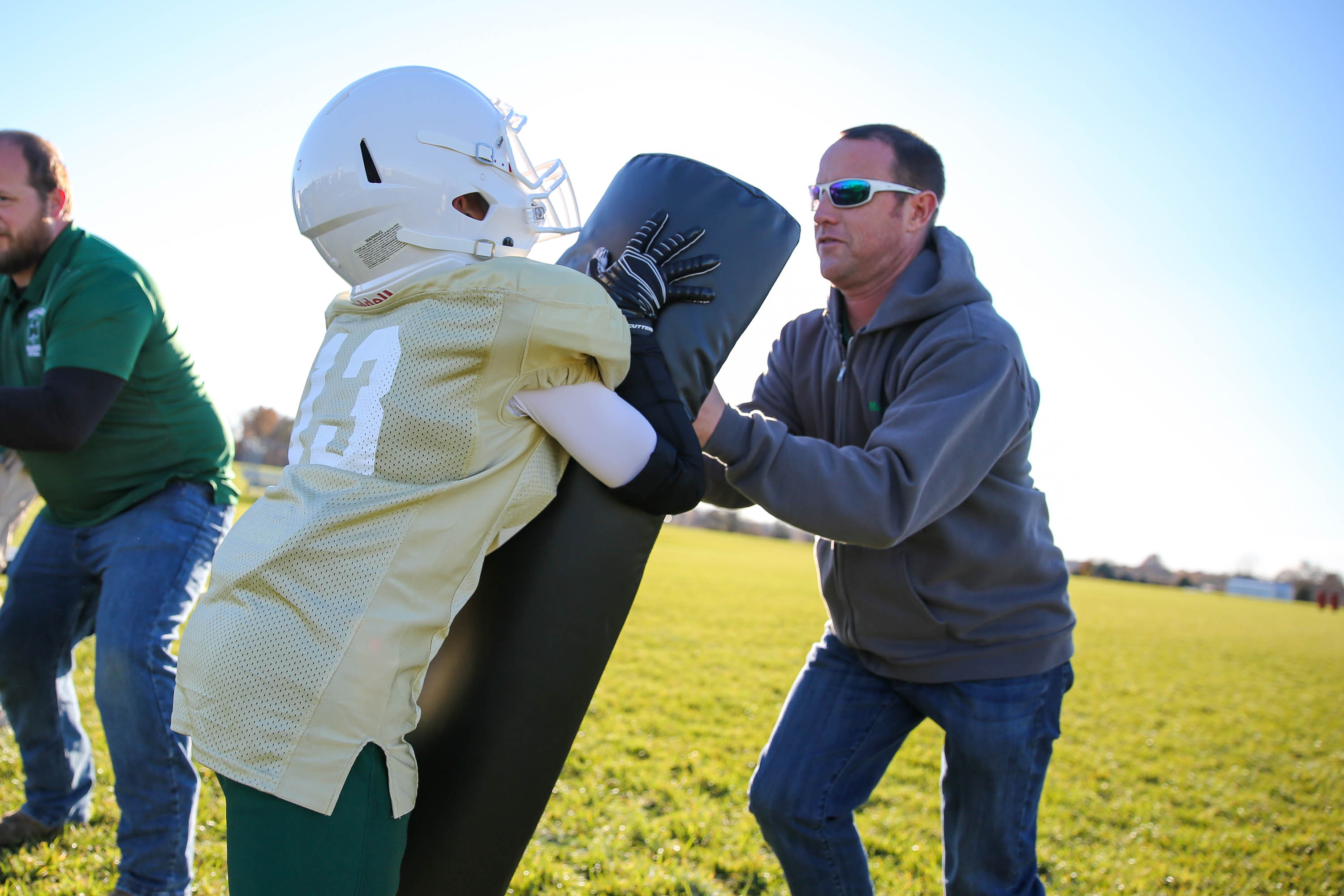 USA Football Senior Manager of Education and Engagement Andy Ryland is a former Penn State linebacker and member of the U.S. Men’s Rugby National Team. Ryland is an expert on tackling and preparation for contact with athletes, consistent with USA Football's Football Development Model. He also assists coaches of all sports in areas of drill design and skill development.

Tracking: the ability to get to the ball carrier with speed taking into account blockers, leverage and teammates, to make a tackle.

Win the space first, set yourself up to win the physical fight.

What started out as part of my youth coaching blog turned into this monster when I realized (and was told by friends) that tracking is a problem across all of football. In my blog, I was speaking to the fact that young athletes, third graders in this case, are bad at tracking a carrier. We work at it, but I know and understand they will struggle. Kids don’t have the experience to reference a “database” that helps them solve the problem. This database gives them clues and references for how people move, it allows a speeding carrier to become, “seen it, done it, recognizing it, so I’ll do this.” This is massive because understanding tracking -the idea of angles, speed, leverage- is miles away from being able to do it.

The example I used was if you have ever seen a child learn to catch, they seem to struggle reading and anticipating where the ball will end up. They don’t know where to best position their body or their hands to a thing traveling through time and space. The information that is entering their eye isn’t connected to where to put their hands. They struggle sometimes to judge distance, space and time, especially when it’s a pass that’s leading them. This is because we have added a second variable (both things moving), and this has changed the visual picture.

NOTE: This is a practical article, not a discussion on HOW information enters the eyes, brain CNS to allow people to track and adjust to moving objects and find intersection points.

So how about tracking/tackling? How do we solve this problem of learning space, speed, angles and timing and is databasing as simple as reps, reps, reps? On the very surface level, yes, reps help fix the problem. Reps equal experience which equals “I have seen this before” and I know this pattern. Players need reps to see and understand these visual cues, plus learn what personal movement pattern, angle and speed solved the problem. The number of reps, the amount of information needed to create a usable, accurate database will differ from player to player.

Understanding the need to build this database and recognize patterns and movements will help coaches have an eye for exposure to situations when building drills and programing practice. It can also help keep you from the not-so-helpful coach-ism of, “I’ve told you a thousand times to stay leverage side.” Trust me, most players know what to do, it’s doing it that is difficult. It’s not that I don’t know TO stay back hip, it’s matching the movement of the carrier and the situation to accomplish it.

Here is where it gets tricky and deeper than reps, reps, reps. The idea that simple, sterile reps will build the database and vastly improve your skills works (fairly?) well for static examples. The target is always the same and predictable but tracking a ball carrier is a massively variable action. MASSIVELY variable. The more variable a task, the less rote ‘memorization’ is the answer. It becomes much more problem solving. So if we are only practicing solving the problem on a very narrow bandwidth in training, what happens on gameday? Meaning, doing reps of the same thing over and over might not be the answer you need on gameday because you can’t copy and paste to all situations. Only doing the simplest of drills may leave lots of blank spots in the database because the gameday version of the problem most likely looks nothing like what was practiced. Let’s explore that.

Most coaches and programs do some form of tracking every day. Pursuit drill (please stop), Run and Gather and simple Angle Tackle are the most common. The biggest issue with this is how they are run. Those drills are often very defined and run at a predictable pace to a cone (a predictable angle). The reason this often fails to help develop tracking to an elite level is it doesn’t add to the database. Players have done that thing a lot, but the real thing has ten-thousand variations they have never seen.

See in real life, the runners change week to week. They change in game. Runners move differently and have different threats. How do I judge speed for a small player, a tall player, a ‘deceptively fast’ long strider, or a bowling ball of power? Even when it’s the same runner, their movement patterns change from play to play. They change pace almost every step, depending on if they try to beat you with speed, set you up for a cut or sit you down and reaccelerate. Real opponents TRY TO WIN. Real runners change angles multiple times a play, depending on where other defenders are, depending on where their blockers are, depending on space. The primary angle changes based on the play call, the secondary angle changes based on what happens at the point of attack, and they change angles again every time a tackler is a threat. Even in the open field, players wiggle and move and set up space and cuts. Starting to see the picture?

As a tackler, I am changing my speed, angle, and movement pattern an infinite number of ways to best match the carrier who is also changing based on the play as it unfolds. So, what happens when players have only practiced at a predictable speed, with a predictable angle and with predictable movement? Am I actually learning to read a carrier, read moments and common carrier actions?

Example: Ever notice on how in Run and Gather the ball carrier motors down and takes short choppy steps so the defender motors down. One problem, no runner changes direction like that! If it takes you seven steps to slow down and make a cut, you are probably not seeing the field.

Furthermore, what happens when we only practice changes of speeds and angles that aren’t threats and I’m always comfortable? These same players now struggle to change speeds and angles and end up not getting to the right spot when threatened with real movement. Example: Players overrun plays on gameday because they are afraid of being outrun to the corner. They open up their stride and take the wide angle to intersect the corner and get cut back on. Those same players never make that mistake in drills because the runner in drills never threatens the corner to force full speed, wide angles.

This is where that database idea comes back to play. If I have logged lots of reps at various speeds and various angles and changing speeds and changing angles with different runners, I am more likely I have the ability to ‘read’ the situation and change as needed to intersect it. That seems to make common sense but there is also a good reason. Taking drills to the field is based on a few things.

When it comes to developing Tracking, a lot comes down to how good your drills are and if they are ‘close enough’ to transfer to the gameday environment. Everyone wants to take a good angle; I’d venture most player know what a good angle is. So why so many mistakes? The honest answer is that getting to a good angle is very individual. How fast is the defender? How well do they move? Who are they going against? The angle taken to a thumper of a tight end is different than the track star wide receiver. Variability. Is the biggest threat the runner has speed, power, or his cut? Our initial angle and thoughts on how to solve the problem now get impacted by what they are doing, how they are moving, and where our help and their blockers are. How are they attacking and how do I have to adjust?

How do players develop the ability to combat that variability and match patterns? One thing about highly variable, individualized tasks is it takes exposure and guided learning because you can’t copy and paste answers. What worked for them in similar situations vs. similar runners and similar threats? How do players learn that? Good, realistic problems! So, players need reps but, most importantly, the right kind of reps. The kind that challenge them, teach them and grow their database of tracking experiences, angles, and movement in various times and spaces. That gives players more reference points for how to move and make adjustments to what they face.

So that’s 1,700 words on what Tracking really is, and why it’s so important to add realism and variability to your drills. We will use this as the foundation for part two, where we discuss the how, and the most important concepts to know, learn and apply to your drills.