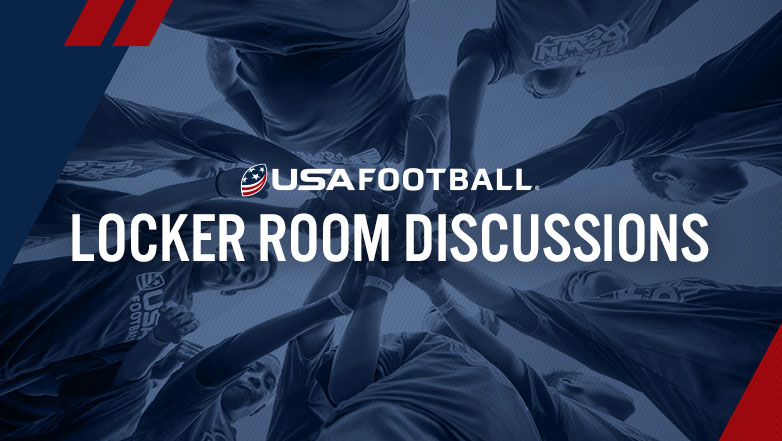 Football is America’s favorite sport, a game many athletes of all ages watch on weekends and envision playing themselves. However, widespread opportunities haven’t always presented themselves to the sport’s dedicated fans who live with disabilities. Karalyn Stott and the organization Move United are changing the game’s accessibility through the rapidly expanding USA Wheelchair Football League (USAWFL).

Stott is a Senior Program Manager for Move United and a member of USA Football’s League Leadership Advisory Council. She began working with the USAWFL during the league’s inception in 2019.

“The NFL and the Bob Woodruff Foundation approached Move United about the opportunity to create more programming for veterans with disabilities, and the USA Wheelchair Football League was born,” Stott explained. “It's not just for veterans, it's for anyone with a permanent physical disability. We want to create more opportunities for people to play football.”

Games in the USAWFL have four 15-minute quarters, the same as college and NFL games, and are played on 76-yard surfaces (counting the eight-yard end zones) that are 22 yards wide. Players don helmets, facemasks, and jerseys on gameday as they prepare for fast-paced, physical competition.

“When people hear the term ‘wheelchair football,’ they get a picture in their minds of a game that's slower or less interesting than what they're used to watching on Saturday or Sunday, and that's not the reality,” Stott said. “We adapted a minor number of rules, so the game looks and feels just like the sport of stand-up football. It’s hard-hitting, these athletes move super fast, and they work hard to be world-class athletes in their own right. I think that’s something people don’t understand about adaptive sports in general.”

An affiliate of the U.S. Olympic & Paralympic Committee, Move United is the country’s largest grassroots adaptive sports organization. The non-profit’s 200+ member organizations help more than 100,000 athletes reach their highest potential through sport annually. Move United aims to provide everyone, regardless of ability, with access to sport and recreation at all levels of competition from recreational to paralympic opportunities.

The USAWFL is Move United’s most recent step toward fulfilling its goal as an organization. Although not the first organized wheelchair football program, the USAWFL is the largest and most successful endeavor yet that has broadened football’s horizons.

“Wheelchair football and adaptive football have been around in small pockets of the U.S. for a long time,” said Stott. “We took a while to reach out to people who participated and understand what was positive or negative about their past experiences. In December of 2019, we got a rules committee, created our rule book and formed our first four teams. Then COVID hit, and we didn’t have our first competitive season. In the meantime, we worked on structurally solidifying the league by creating training for coaches and officials. We expanded by another five teams, and when we officially had our first competitive season, we kicked off with nine teams instead of four.”

COVID-19 delayed the USAWFL’s inaugural season but failed to sap the growing enthusiasm around the league. Since its first official game in September 2021, the USAWFL has trained more than 115 coaches and served more than 700 athletes, with 400 expected to participate this year alone.

“We started with four teams, and people were hesitant to sign up initially because it was new,” Stott said. “Now we have several teams that are really excited about joining the league. We have athletes that reach out all the time to ask, ‘when is a team coming to my town?’ ‘When am I going to be able to play?’ It’s exciting to see the league’s growth and the opportunities for all our athletes.”

“The feedback has been great, both in terms of excitement around the sport and in creating team environments where our athletes get to spend time with other people that have disabilities,” Stott said. “They get to learn from each other. It's a nice camaraderie that they don't always experience. This is a place where you get to be around a lot of people like yourself and build a great community.”

Move United and the USAWFL work hard to provide opportunities for their athletes. The league held competitive tournaments in three cities this year and will host its championships in conjunction with the NFL's Super Bowl Experience in Arizona. Move United hosts learn-to-play clinics throughout the country for athletes who aren’t ready for competitive play, along with training opportunities for coaches and officials.

“There are a lot of different ways to get involved with the league whether you're an athlete, coach or official,” explained Stott. “We really want people to get off the sidelines and become involved with our sport.”

Stott recognizes that a wheelchair football program isn’t feasible for every school or community, but she invites administrators, coaches and community leaders to reach out to Move United. There are many ways to provide inclusive programming for athletes with disabilities within current football structures, and Move United would be happy to provide guidance on how to best include individuals with disabilities in programs.

“The adaptive sports community is different than any other community in sports,” said Stott. “The people participating as athletes, coaches, officials and trainers have made this space so welcoming, and we look forward to helping it grow.”