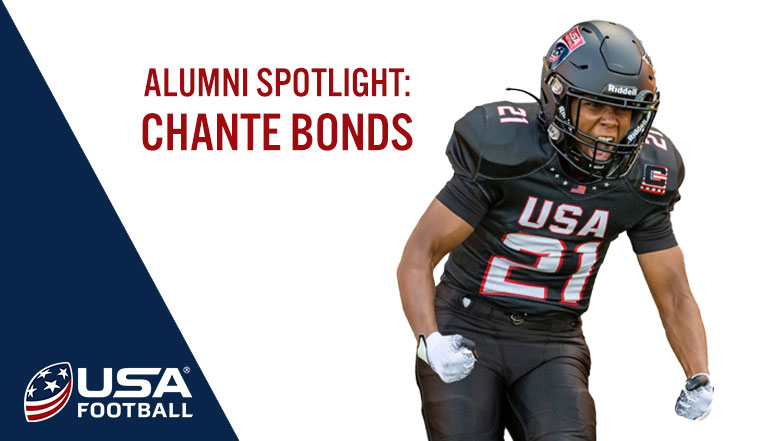 Chanté Bonds is a captain and star defensive back on the Boston Renegades in the Women's Football Alliance (WFA). She was a part of the 2022 U.S. Women's Tackle National Team that defeated Great Britain 28-10 in the gold medal match of the 2022 International Federation of American Football (IFAF) Women’s Tackle World Championship in Vantaa, Finland. Today, Bonds shares her story of growing up as an athlete that led her to where she is today.

Bonds’ love for sports sparked at an early age in her hometown of Brockton, Mass. As a young athlete, she loved playing basketball, dribbling, and shooting baskets for her middle school team. She joined an AAU team called the Bay State Magic and became a star player on her high school basketball team.

“I learned a lot. I met some really great friends. I played with some awesome athletes, and I think that is what propelled my athletic career, playing for those three teams in particular,” Bonds recalled.

After high school, she advanced to the collegiate level and was awarded a scholarship to play for Bentley University by Naismith Memorial Basketball Hall of Fame coach, Barbara Stevens. Bonds loved playing for Bentley University and credits a lot of her success after graduating college to Coach Stevens. Bonds landed her first-ever basketball coaching job at Fairleigh Dickinson University in Teaneck, N.J. She spent three years at Fairleigh Dickinson, where she earned her master’s degree. Bonds went on to become a coach at Holy Cross for four years and later started coaching part-time at UMass Boston.

Bonds often engaged in football around her neighborhood growing up. She always had the desire to play the other game she loved, football, but didn’t have access to an organized team when she was young. For the past ten years, she has played for the Boston Renegades, contributing to four WFA National Championship winning teams.

Bonds enjoyed her time on the U.S. Women’s Tackle National Team. She loved that she could focus her full attention on football, like she always wanted to. Training camp, two-a-day practices, watching film, meeting with athletic trainers, and preparing to go out to Finland was everything she had dreamed of. Being on the U.S. Women’s Tackle National Team was the closest she ever felt to being a professional athlete.

“The greatest part of it all was just being surrounded with amazingly talented women who all were on the same page, having that common goal to get out there and compete together at a high level and to ultimately win a gold medal,” Bonds said. Being on the field was surreal, and she didn’t want to leave Finland because it meant her time at The IFAF World Championship was at an end.

The end of the World Championship in August was far from the end of Bonds’ athletic career. She is focusing her time solely playing football for the Renegades right now but plans to play organized basketball again in the future. Although Bonds likes to keep busy on the field and the court, she also enjoys spending time with her family, playing with her dog, and reading.

Bonds is not only a phenomenal athlete, she’s also an outstanding leader for women in the sports industry. She wants to ensure there are spaces for young girls to have opportunities she didn’t at an early age.

“I think it's important that there's representation out there for us. I didn’t grow up knowing any female that played football, and so I think that is a goal of mine just to make sure that I am doing a good job representing women in football and women in sports in general for the younger generation to aspire to,” Bonds said.

Bonds is continuously working to make her voice heard and to amplify the voices of other women who share the same passions. She hopes to inspire women to be exceptional and push beyond the stigmas of what women in sports are capable of.