Tear-away jerseys: One of football’s most unique innovations 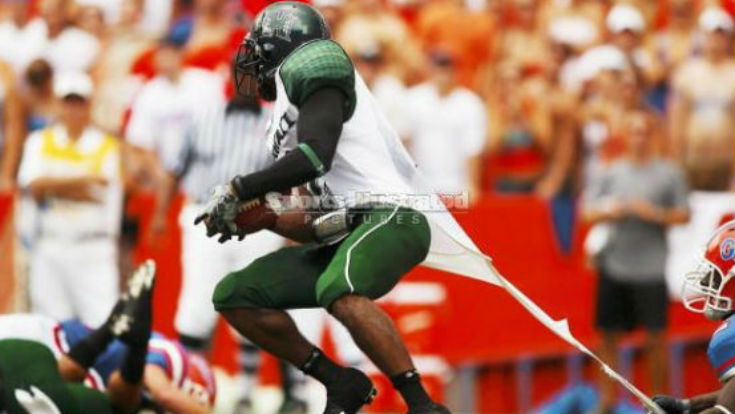 Football has always been a sport that embraces innovation and change.

This willingness to adapt is especially apparent in the evolution of football uniforms. One of the quirkiest uniform innovations sprung up during the grainy, black-and-white days of football’s middle ages during the 1950s and 1960s – the tear-away jersey. While there does not appear to be a concrete single inventor who first developed this disposable tissue of football attire worn in both pro and college football, the earliest documented example of a tear-away jersey was worn by Darrell K. Royal’s 1959 Texas Longhorn squad.

“The jerseys were surprisingly around for quite a while, but the earliest examples I have seen are from the University of Texas,” said Kent Stephens, curator and historian of the College Football Hall of Fame. “I think the reasoning behind them was clearly to give offenses an advantage. Being able to break away from tacklers clearly gave them an edge.”

The College Football Hall of Fame has only one tear-away jersey remaining its collection, that worn by Texas halfback Jimmy Saxton during the 1961 season. Manufactured by MacGregor Sporting Goods, Russell Athletics and a host of others, the jerseys were designed to literally rip away in sections as players pulled out of the grasp of would-be tacklers. The jerseys were worn by Southern schools in the SEC, ACC and in the old Big 8 and Southwest Conference, and initially it was legal for players on both sides of the ball to wear the jerseys.

“The rule was, that once a player’s number became torn off or obscured, they would then have to go off the field and change jerseys,” Stephens said. “In my research, I found that all the players on the early Texas teams that introduced them wore them. They were eventually just worn by the skill players. I think it was due to if you were an offensive lineman, as an example, you didn’t want to have to keep coming out of the game.”

There is legendary NFL Films footage of Hall of Fame running back Earl Campbell being nearly stripped bare by defenders as he stampedes down the sidelines for a huge gain. At the University of Oklahoma, Greg Pruitt was legendary for his devil-may-care running style that left would-be tacklers with only handfuls of torn jerseys in their grasps.

“There are some sort of famous performances, such as Johnny Musso at Alabama in 1971,” Stephens said. “He was playing in basically rags in some of those games. The material they are made out of is very difficult to explain. They are cotton, and the best way to explain them is imagining an old, worn out t-shirt. The two we have are quite brittle, and I worry every time we display them that that’s going to be the end of them.”

As mysteriously as tear-away jerseys appeared on the football landscape, they almost as quickly disappeared. The NFL banned tear-away jerseys in 1979, and college football banned them permanently in 1982. As with many sudden changes in life and football, part of the reason behind the rule change seems to have been a way for schools to save a few dollars on extra jerseys.

Like the single-bar facemask, the ironman player and the veer option offense, tear-away jerseys are now relegated to the dusty corners of history.

“I think the days of the tear-away jersey are in the past,” Stephens said. “Since college football is already starting to crack down on midriff-baring like we saw this past season, I don’t think we’ll see tear-away jerseys make comeback.”

Eric Moreno is a freelance writer based in San Antonio, Texas. He is a graduate of the University of Texas, San Antonio. He is a lifetime season ticket holder for UTSA Roadrunner football (Go Runners!) and in his free time, when not attending games, is an avid reader and traveler. Follow him on Twitter at @EricMoreno6477.