The pin and pull scheme, and why it’s difficult to defend 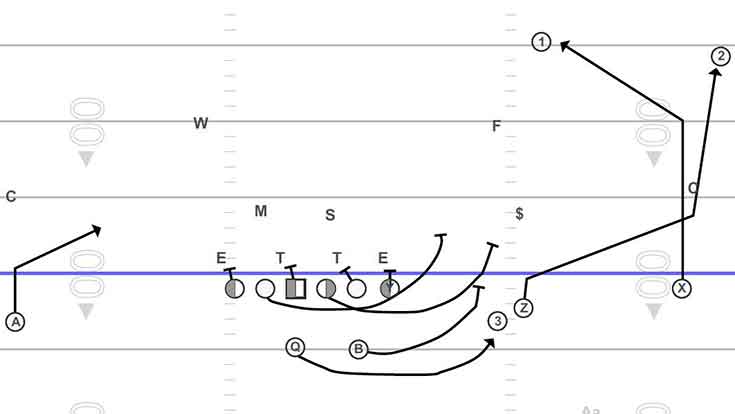 Rich Alercio is confident in his RPO pin and pull scheme, no matter what defense he faces.

The head coach of St. Johnsbury Academy in Vermont joined the USA Football Coach and Coordinator podcast, where he broke down why he thinks it's a nightmare to defend.

Alercio’s love of the pin and pull starts up front, with the ease it presents offensive linemen.

“It’s easy to understand. If he has a guy in backside gap, he pins him,” Alercio said. “Otherwise, he pulls. We can have up to three guys pulling.”

He believes the biggest advantage is that no linemen are downfield immediately. That provides roughly 1.5 seconds for the quarterback before the linemen even consider leaving the line of scrimmage.

It also means the team can run the ball anytime it needs to, because everyone is blocking. So as a quarterback makes reads, that QB can always take off and run, or pass over the top if the defender comes up as run support.

“If they give us the pass, we’ll take it. If not, the run will always be blocked,” Alercio said.

RELATED CONTENT: This football coach has a creative method for player discipline

Alercio has two scenarios he employs to make the pin and pull work against opposing defenses: fade-flat and post-wheel.

In the fade-flat, the outside receiver runs a fade route on the corner, while the slot (No. 2 receiver) runs a flat route. The read is on the outside linebacker/overhang player. If the defender bails to cover the flat, the quarterback runs the ball to the vacated alley.

“If he comes up for run support, the bonus is we’re going to get a pass off over the top or to the side,” Alerico said.

“So when you get teams that play man coverage, we can run the ball.”

The post-wheel play is equally dangerous. The read is the cornerback. If the corner comes up in support, the throw goes to either the post or the wheel, depending on how the safety plays it.

If the corner stays back, the quarterback takes off, blocked by pullers and a lead back.

Alercio prefers it in an unbalanced formation, and often lines up the split end, tight end, slot receiver and running back set to the right. The only player to the left is the flanker. He employs a pre-snap read on a slant route to the flanker, especially when his team puts the formation into the boundary.

If the defense loads the boundary, the quarterback looks to run the slant to the field. If the opposing team defends the whole field, the move is to run the pin and pull into the boundary.

Of course, it’s easier said than done, and the scheme requires excellent quarterback decision-making and read progression acumen. It also requires pulling offensive linemen to keep their eyes on the box to ward off any inside blitzes.

“I think it’s one of those plays that you sit there and say, ‘How do you defend it?’” he said.

This is an updated version of a blog that originally published March 2, 2017.