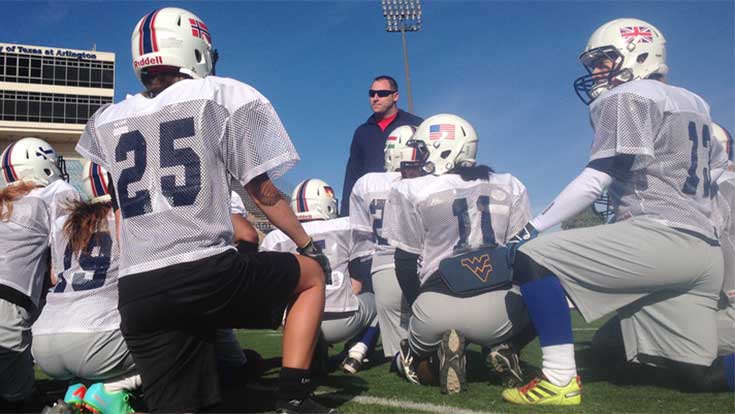 Jim Farrell, the head coach of the Women’s National Team for the 2017 IFAF Women’s World Championship, is more than just a coach for his players.

He’s an advocate for female players and women’s football as a whole.

Farrell continued working Regional Development Camps and in 2013, he was asked to assist in running the Women’s National Team Padded Trials.

The exposure to the Women’s National Team hooked Farrell on women’s football.

He has since served as a head coach and lead offensive coach with all four of the Women's World Football Games as well as the most recent National Team Trials.

Farrell’s passion for the sport—and his players—is clear.

“If you ever need to sell someone on women's football have them come see this team play,” he said. “Our players are talented, physical, skilled and have passion for the sport.”

Building relationships with his players is important for Farrell. Before practice, he asks his players how they are doing physically, mentally and emotionally. Understanding where the players are mentally helps him identify the pace he needs to take when coaching on a given day.

Regardless of gender, football is football. But Farrell has learned to take a different approach when coaching adult women versus high school boys—one that is more focused on clear communication.

“While coaching women, there needs to be a little bit more of a dialogue involved,” he said. Farrell believes women have strong communication skills and have stronger practices when they understand the reason why a concept is important.

The most rewarding piece of coaching women to Farrell is how receptive they are, especially with the lack of opportunities in the past.

“When they get the coaching they soak it up like a sponge,” Farrell said.

He understands the massive commitment these women make in order to play the game they love. His respect for every player on the team is visible in his words and actions, having spent multiple years within the program.

“People don't truly understand how much they need to sacrifice to be on this team. The time, money and effort that they put forth to keep this dream a reality is inspiring,” he said.

Farrell is not a stranger to challenges on the field. The tournament only gives him one week to install an offense, defense and special teams. That tight time frame would be a hurdle for any coaching staff and team.

Yet Farrell is excited about the challenge.

“It is a great honor to share this experience with this team. It is all about them. They have worked extremely hard in their own cities with their own teams to prepare themselves for this moment,” Farrell said.