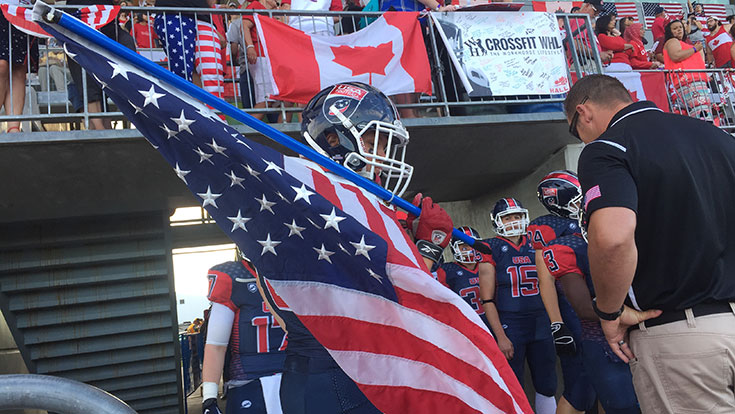 As women’s football continues its prodigious growth around the world, the U.S. National Team remains the gold standard.

With a stout defense and an opportunistic offense, the U.S. pulled away from Canada to secure a 41-16 victory in the gold medal game of the 2017 IFAF Women’s World Championship.

🎶We are the champions🎶

The win marked the third straight time that that U.S. defeated Canada in the gold medal game of the IFAF Women’s World Championship. The U.S. won the 2010 and 2013 world championships 66-0 and 64-0, respectively.

The three-peat would not come nearly as easily.

The U.S. leaned on its running game—which was largely contained in the first half—to hold off a Canadian team in the second half that repeatedly showed the ability to make big plays.

As time expired in the third quarter, Canada’s Rebeckah Heninger returned a fumble 85 yards for a score that helped bring Canada to within 11 points, 27-16, at the start of the fourth quarter.

However, Canada would get no closer.

For much of the game, each time it appeared the U.S. was poised to pull away, Canada seemed to have an answer.

Following a failed field goal attempt by Canada, the U.S. connected on a trick play that led to a long touchdown for Jeanette Gray to give the U.S. a 14-3 lead in the first quarter.

Following an O.J. Jenkins touchdown late in the second quarter, Canada answered in the form of an Alex Kowalski touchdown grab with three seconds remaining to trim the deficit to 21-9 at the half.

The U.S. finally began to establish its running game in the second half. Lisa Horton found the end zone early in the third to extend its lead to 27-9 and help set the tone for the balance of the game.

Entering the week, one of the goals for Gray and her teammates was to demonstrate that women can play a brand of football every bit as sound as that of their male counterparts.

"What we hope happens," Gray said, "is that if you didn't know we were women—you couldn't see the ponytails coming out of the helmets—that you could watch the game and not know the difference between women and men playing."

Video: Behind the scenes with the U.S. Women’s National Team