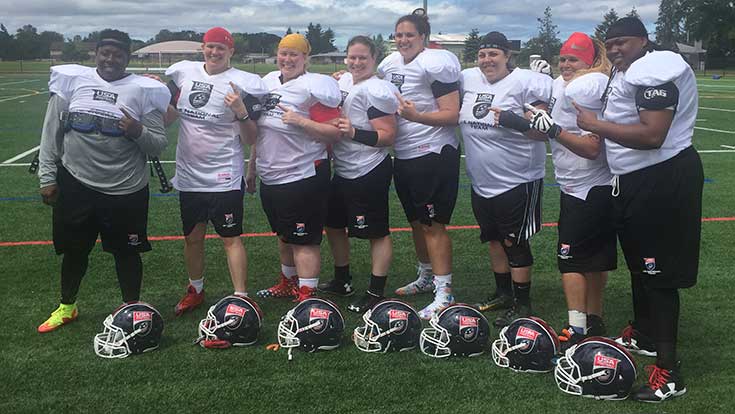 The 2017 IFAF Women's World Championship is in the books.

Six different countries participated in a total on nine games in Langley, British Columbia, with the U.S. capturing the gold medal.

Here's a full recap of all the action:

The U.S. relied on a balanced second-half ground attack to pull away from Canada 41-16 to capture a third consecutive gold medal IFAF Women's World Championship.

Mexico won its second game of the Women's World Championship with a 19-8 victory over Great Britain. Mexico led 13-8 at halftime and extended its lead to 19-8 in the third quarter. It would prove to be a deficit that Great Britain could not overcome.

Finland took fifth place with an impressive 35-0 blanking of Australia.

It looked like Australia had usurped momentum in the third quarter, following up an offensive touchdown by returning a Mexico fumble 50 yards for a go-ahead touchdown. However, the touchdown was called back and Mexico regained control, pulling away for a 31-10 victory.

A brilliant defensive effort--featuring three blocked punts--sparked the United States to an easy victory over Finland, 48-0.

Kimberly Marks, Angelique Smith and Jordyn White all came up big on special teams, blocking punts and giving the US National Team excellent field position, on which it capitalized repeatedly.

Sami Grisafe threw touchdown passes to Jeannette Gray and Ashley Whisonant to power the offense. Lisa Horton rushed for a touchdown and connected with Angela Baker on a 40-yard touchdown for an additional score.

Canada led from start to finish, stretching a 21-0 halftime lead into a 35-0 victory over Great Britain. Through two games, Canada has only surrendered six points.

In the event’s first game, Great Britain held off a late rally attempt by Finland to come away with a 27-21 victory.

The U.S. National Team opened up its quest for a three-peat with an impressive shutout over a stout Mexican squad.

The host country came out strong in its first game, as Canada cruised to a 31-6 victory over an Australian team that features former NFL coach Jen Welter on its coaching staff.

In a piece released on Wednesday, Bleacher Report profiled the U.S. Women's National Team and its quest for greater respect within the football landscape.

Despite the unique challenges and pressures that women face trying to pursue their gridiron passion, they don't enjoy the same respect as their male counterparts.

Receiver Jeannette Gray doubles as an assistant high school football coach. She views the obstacles she faces as a female coach as motivational opportunities.

"There is a different type of pressure, because if you screw up people will look at it as a woman screwing up and not as a coach screwing up," she said. "But I'm trying to thrive on that rather than let it hold me back."

"What their male counterparts don't understand is that everyone in women's football puts themselves in bad situations in life to put themselves in a great situation for football," said team head coach Jim Farrell.

"As a man, I never had that struggle—never had to put my life or my business or societal expectations on hold to be good at football. They're used to always overcoming obstacles to do something they love, and they are willing to fight to play. They're warriors that way."

St. Vincent Sports Performance is once again taking care of U.S. National Team athletes, but the challenges they've navigated have been somewhat unexpected.

Dave Weikel, the team's head athletic trainer, is in British Columbia and has been blogging about his experiences. He admits that the heat has been a surprising factor that he and the team have had to face.

"The average high for Langley this time of year is 71 degrees. Of course, we experienced a heat wave of record highs, and temperatures on game day soared to around 90 degrees," he wrote.

Even from the trainer's table, Weikel senses the anticipation over Friday's gold medal showdown.

"Already you can feel a new tension in the air as we prepare for the championship game," he wrote. "Team Canada has played well in their wins over Australia and Great Britain.  [Fellow trainer]Sarah and I are doing our best to keep the training room light and relaxed, giving the players a refuge from the tension of meetings and practice."

Click here for team rosters and information on how to watch the IFAF Women’s World Championship. For additional coverage, visit Football Canada.