From the playgrounds to public speaking – how football shaped Bo Scaife 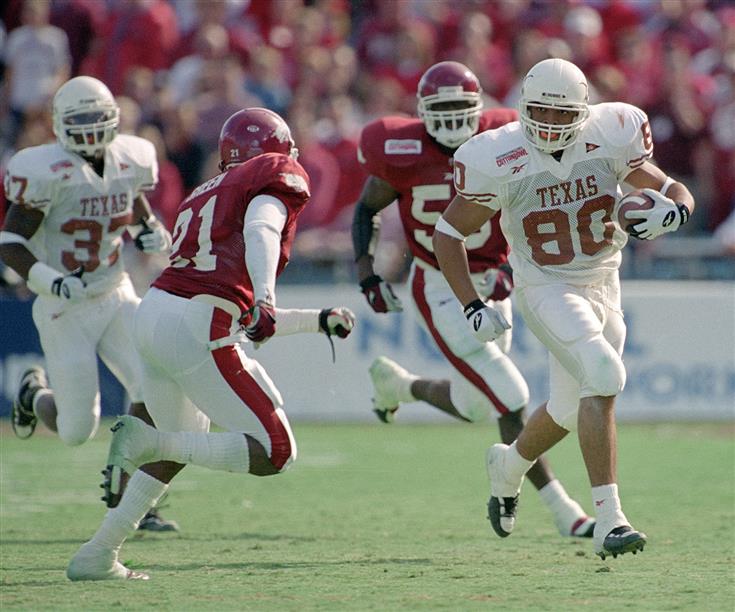 (Photo via University of Texas athletics)

It was almost predestined from birth that Oliver Edward “Bo” Scaife III was going to be a football player. Growing up in Denver, Scaife was always bigger than all of the other kids he played with. He started playing the game when he was 8 years old, and he grew to love the sport by playing on the playgrounds with his friends.

“I always say that football has been the one thing that has allowed me to showcase everything that God gave me,” Scaife said. “My physical abilities like my power and explosiveness and it also allowed me to express myself through celebrating and dancing with my teammates. It let me be really vocal for the first time ever. All of these things you can do in one place and nowhere else. That's what I love about football.”

Always one of the biggest kids on his team, Scaife was able to really show what he was made of. By the time he got to J.K. Mullen High School, he had set himself apart as an elite offensive talent. His size and speed made him one of the best pass-catchers in the country, earning Parade All-American honors on his way to leading his team to a Colorado state championship his senior season.

“In high school, I played all over the field. I was a tailback, safety, tight end, I returned kicks and was an All-Colorado player doing that. I played everywhere,” Scaife said. “It wasn't until I got to Texas that the coaches saw me really as a full-time tight end.”

Scaife made the decision to play for the University of Texas. He wanted to be a part of the best recruiting class in the country. The staff at Texas in 1998-1999 scoured the country and recruited some of the best to play at Texas, including Scaife.

“I loved playing at Texas and I loved being a part of that group that really helped turn things around there in Austin,” Scaife said. “It took me a little bit to get used to the heat down there, I'm not going to lie. But, when I did, I think I showed my skills and showed what I could do.”

While injuries took their toll on Scaife during his tenure with the Longhorns, he still was an All-Big 12 honorable mention as a sophomore and an All Big-12 First Team member his senior season. His skills caught the attention of the NFL and Tennessee Titans drafted him in 2005. The following season, he was catching passes from his former Longhorn teammate, Vince Young.

“That was something great, to not only play with VY there in Tennessee, but to see all of us from those classes playing in the league together,” Scaife said. “I'm proud of what we did at Texas and I'm proud of what we were all able to do in the NFL.”

In the pros, Scaife became the first tight end in NFL history to have a rushing, receiving, and kickoff return for a touchdown, along with making a tackle in the same season. His athleticism on the field was ahead of its time when he played in the league. It made him a valuable player for the Titans and later in his final season in 2011 with the Cincinnati Bengals.

Age caught up with the big man and he knew it was time to move on to other endeavors. When Scaife retired following the 2012 season, he launched his own company, Fresh Ed., and began touring the country as a public speaker. Through it all, he never forgot the lessons he learned from football, including one very special one.

“Football taught me a lot about what it means to be a family with your team,” he said. “I think that is a big lesson that football can teach. When I was dealing with some injuries, my teammates, my coaches they all were with me through that. That's something you don't get in a lot of things in life. But in football, you guys are family. I'll be a Longhorn for life.”