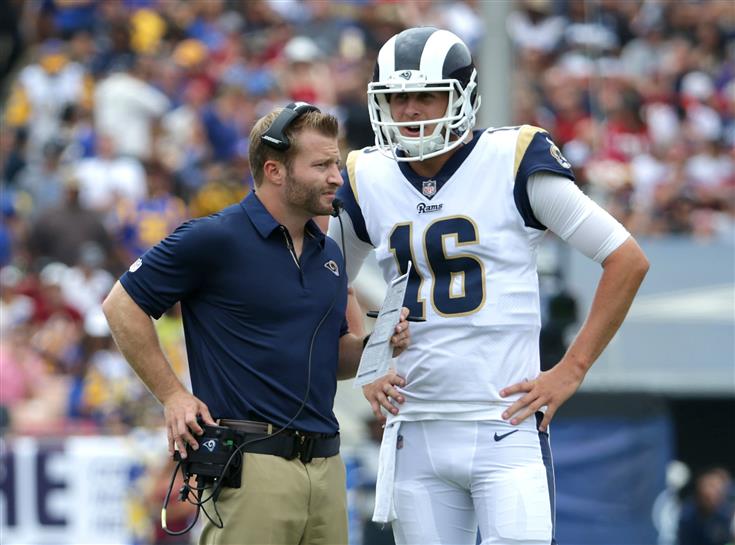 Los Angeles Rams coach Sean McVay has done the unthinkable - he’s transformed the Rams from being the worst-scoring offense in the league last year to No. 1 so far this year. The turnaround has been remarkable.

McVay's offense is built on the run game with a high volume of play-action and screen plays. His players are well-coached and the timing of the entire unit is totally in sync. This may seem hyperbolic, but he’s modernized the West Coast offense.

Similar C4 beater as Goodwin TD. Out is deep enough to hold the safety and Woods gets a 1 on 1 with CB with leverage advantage. pic.twitter.com/RugEEjKrD9

As if McVay’s base concepts aren’t hard enough to defend, he's also a master at playing mind games with opposing defensive coordinators.

Speed and power aren’t the only things taken to another level in the NFL. Scouting and intel gathering are an essential part of winning. Scouting departments operate like the CIA to gain even the smallest advantage on Sundays.

Because of intense film study and some analytics, defenses have a good idea of what plays offenses like to run based on what formation they're in, where they are on the field and personnel groupings.

For example when an offense is lined up in an I-twins stack formation on the left hash on their own 30-yard line, a defense might know there's a high probability they’ll run weak outside zone. This knowledge could be incredibly advantageous, because the defense could line up in a front that would make it difficult to run that play.

In Week 9 against the New York Giants, the Rams lined up in an empty formation with trips bunch to the left and receiver Tavon Austin in a twins set to the right.

Austin orbit motions over and quarterback Jared Goff snaps the ball and tosses him the ball as Austin reaches top speed. Essentially, the play is just a toss crack with some window dressing, but it gets the ball into one of the Rams' fastest players and picks up 21 yards.

Opposing defenses will see that formation and play to take note. In the Rams' next game against the Houston Texans, the Rams lined up in same empty formation. The Texans' defense was likely well aware that the crack toss to Austin might be coming. McVay was counting on it.

Austin once again orbit motions and Goff tosses him the ball. However, the Rams are actually running a counter play. Tight end Tyler Higbee fakes like he’s pulling in front of the toss to the right, and actually pulls toward the left. As the defense flows hard to the right, Austin reverses field with Higbee as a lead blocker. The offensive line on that side forms a wall to seal off the pursuit.

The play could've resulted in big yards, but the defensive end on the backside does a good job of slow-playing the toss, which caused Austin slow down to set up Higbee for the block. The play still resulted in seven yards, but McVay was counting on the end being a non-factor, which would've allowed Higbee to lead block into the second level rather than in the backfield.

In Week 7 against the Arizona Cardinals, the Rams lined up in a Singleback Y-Bunch right formation with receiver Robert Woods as part of the bench. When the ball is snapped, Goff fakes a handoff for a run to the right but hands the ball off to Woods running an end-around to the opposite direction.

The play only picked up four yards, but it’s on film for the curious eyes of future opponents.

Against the Texans, the Rams line up in the same formation. The beginning of the play looks familiar - Goff fakes the handoff for a run to the right and Woods starts like he’s running an end-around to the opposite direction.

The defense is in man-to-man coverage but abandons their assignments to flow over to the left, thinking that the end-around is coming. However, Woods changes direction and runs a swing back to the right.

The defender guarding him bites on the play hard and is nowhere near Woods, who is left wide open and finishes the play for a touchdown.

So, there actually another layer of deception that comes with these kinds of mind games. Once these plays are on film, it forces defenses to think twice about trusting the scouting report and tendencies they get from watching film. In a game where one false step can completely change the outcome of a play, neutralizing their aggression could be a major advantage. It certainly has worked for the Rams.