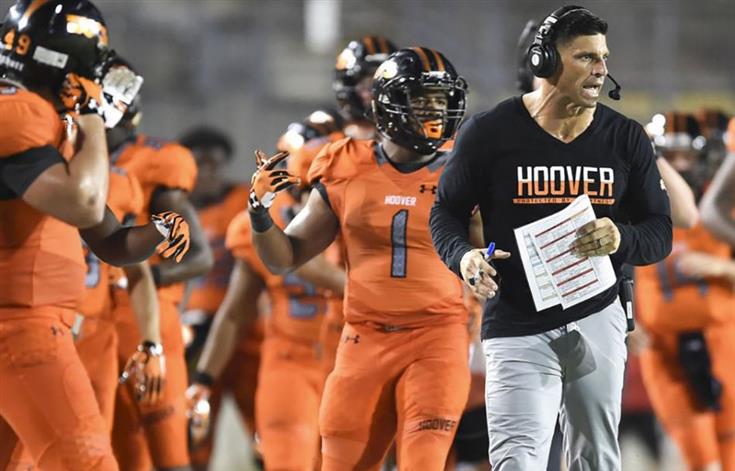 With his team's 48-20 victory over McGill-Toolen for Alabama's Class 7A championship, Hoover coach Josh Niblett won his sixth title at the school and became the first to get seven in a career.

Josh Bean of AL.com reports this year's Hoover squad lost three regular-season games for the first time since 1999. That didn't matter once the playoffs began.

"For us, it's about a standard, about a culture," Niblett said. "The day-to-day process can't be about the end result. It can't. It's about winning the day. I'm about building men. If you're not doing that, what are you in it for?"

It was the second straight 7A crown for Hoover (11-3) over a previously unbeaten McGill-Toolen (13-1) squad, and 13th overall for the program. Ben Thomas of AL.com says quarterback Jalen Parker was the game's MVP, with 264 yards and four touchdowns. Auburn commits Shedrick Jackson and George Pickens combined for six catches, 196 yards and three TDs in the first half.

Here's a look at how Hoover got it done:

With a 37-36 triumph over McClellan for the Class 5A crown, coach Kevin Kelley and Pulaski Academy (Little Rock, Arkansas) notched its fourth consecutive state championship.

Kelley, known for rarely punting, and frequent onside kicks and two-point attempts, engineered the nation's top passing offense at 443 yards per game. QB Layne Hatcher threw for 5,779 yards and 66 TDs to lead the 14-0 Bruins, whose 27-game winning streak is the third-longest in state history.

Attendees of the USA Football National Conference in Orlando, Florida, coming in January as part of NFL Pro Bowl weekend, can listen to Kelly explain his ultra-aggressive two-point theory and other tactics. Those who are interested in attending can register here.

A great 2017 got better for Ben Davis (Indianapolis) coach Mike Kirschner on Thursday.

In the Class 6A title game two weeks ago, Kirschner's Giants wrapped up one of the more impressive campaigns ever in Indiana with a 63-14 demolition of Penn, a team that had given up just 5.31 points per contest. Quarterback and Indiana commit Reese Taylor was named Indianapolis Star Mr. Football on Wednesday, after completing 73 percent of his passes for 3,150 yards and 40 TDs, and running for 802 yards and 15 scores.

Congrats to @GiantAthletics' HC Mike Kirschner for winning the #Colts Coach of the Year Award! So excited to see him present at the 2018 USA Football National Conference. 📹via @Colts

Kirschner will also be a presenter at this year's USA Football National Conference. 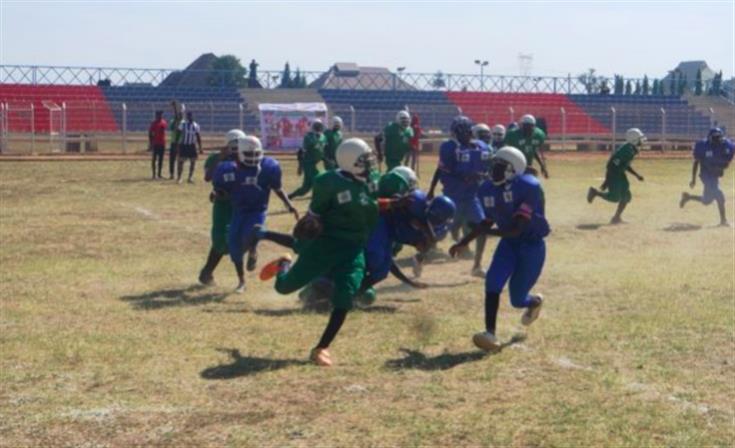 The first championship of Nigeria’s inaugural American football youth league concluded with a matchup between the MTD Tigers and the ABC Dogarawa Game Shakers, as the Tigers prevailed 26-12 in front of more than 400 excited spectators.

American Football International says the league was created by coach Amadi Chukwuemeka Innocent, founder of the American Football for African Mission, a Nigerian organization that promotes the sport throughout Africa.

The league began with a fundamentals camp for 550 kids age 9 to 14, and eight teams formed with 53 players each.

Said Game Shakers coach Amadi Obiora Victor, “I hope to one day see football streamed into the home of every family in Africa … I hope to see football challenge soccer and basketball in Africa.”