How good will Louisville quarterback Lamar Jackson be in the NFL? 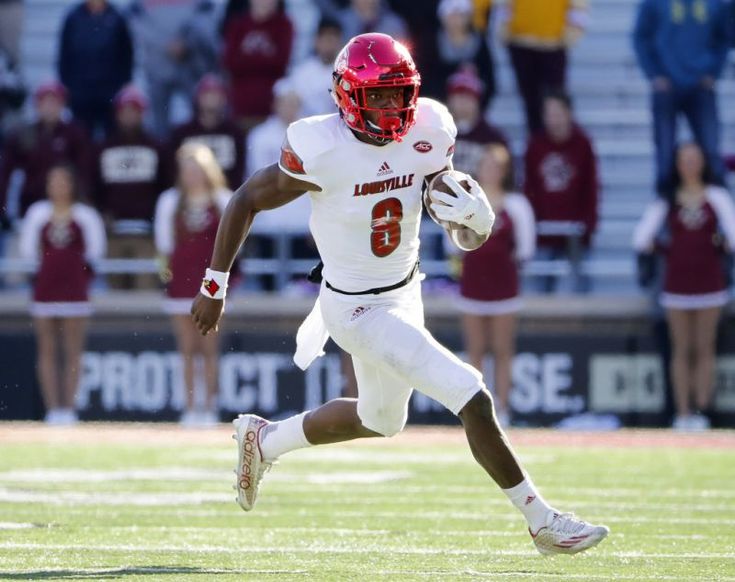 The Lamar Jackson debate is already a polarizing one. Some “big draft” analysts are calling for him to switch positions in the NFL, while anyone who actually has watched Jackson play without bias can say without a doubt that he possesses the physical and mental tools to play quarterback in the NFL. How good of a quarterback he will be is the question.

This year, Jackson has grown leaps and bounds as a passer and will still only be 21 years of age by the time he is drafted. His collegiate improvement is evidence of his work ethic and ability to grow as a passer. Although his incredible running ability and effortless-looking throwing motion draw comparisons to Michael Vick, Jackson is a much more refined passer than Vick was in college.

RELATED CONTENT: Two plays to add to your playbook from Oklahoma and Clemson

When watching Jackson, the first trait that stands out is his ridiculous athleticism. As a runner, he is up there with the most talented running quarterbacks who have ever played collegiate ball. He has special burst, long speed, and ankle-breaking moves.

On this play, he surveys the field against a talented Florida State defense and doesn’t see anyone open, so he takes off. The pursuing defensive back takes a pretty decent angle and looks like he has Jackson dead to rights, but Jackson gives him a little move to the outside, cuts back upfield, and leaves him in the dust.

As he gets downfield, he breaks another tackle with a spin move. It’s almost like having a punt returner playing quarterback with his running ability in the open field. He’ll give defensive coordinators fits trying to find ways to keep him from breaking the pocket.

Where Jackson grew most from last year to this year is his patience in the pocket. Last year, he would take off and run whenever he exhausted his first two or three reads or whenever he saw a small opening. That’s a fine strategy in college because he’s so much more athletic than most defenders, but not good for his long-term development.

RELATED CONTENT: How NFL teams are using the scissors concept

This year, he’s used his elusiveness to buy time in the pocket, while keeping his eyes downfield to look for open receivers.

If Jackson could do this in the NFL, he'd be closer to Russell Wilson than Michael Vick. pic.twitter.com/daVue7CDhO

Jackson uses his speed to escape from interior pressure and then shows off his change of direction ability by bending back into the pocket. He has space to take off and run, but keeps his eyes downfield and finds his receiver breaking across the field. He delivers a perfect strike to his receiver and hits him in stride.

What separates Jackson from other elusive quarterbacks who have turned out to be busts is his consistency in making “on-schedule” plays. He has the discipline, intelligence and poise to stay within the offense and throw the ball on rhythm.

Here, he drops back and delivers a perfectly placed pass after one hitch. The receiver is well covered, but Jackson is still able to fit the ball in a tight space with his arm strength and accuracy.

Jackson has also drastically improved his touch passes, particularly on fade patterns or corner routes. He has been extremely difficult to stop near the fringe red zone because of his ability to make these passes against man coverage.

Jackson has gotten so good at throwing fade routes. Deadly from around the fringe red zone.

Slot fade here but throws it like a corner route away from the safety. Great adjustment by WR. pic.twitter.com/8d7FGQwp3J

It’s hard to tell whether this route from the slot receiver was a corner or fade route, but Jackson throws the pass away from the safety and drops it in with just the right amount of touch. He has great trajectory control with his touch passes and this will serve him well at the next level, where windows will be smaller.

Fitting passes in small windows also requires anticipation. This is another area where Jackson separates himself from quarterbacks who rely too much on their mobility. Quarterbacks like Johnny Manziel didn't make on-schedule, tight-window throws often and would rather take off and run rather than anticipate where/when these windows open up.

Can't believe people are saying this kid has to switch positions.

Correction: Up* by 4 points. pic.twitter.com/VJStzjk2AW

By throwing the ball on time, Jackson is able to get the ball to his receiver before the underneath defender from the other side could help on the play, and he hits his receiver in stride, which gives him room to gain yards after the catch.

Jackson could improve his footwork and narrow base. They have caused him to throw some inaccurate passes. He is almost exclusively in the shotgun at Louisville, so he’ll have to learn NFL drops and get a feel for the timing and syncing different types of drops with specific routes. However, this is the case for most quarterbacks who are entering the draft now, and there have been numerous examples of quarterbacks who have improved their footwork after being drafted.

His narrow base might be a more difficult habit to break.

With his feet so close together, he isn’t as balanced as he could be. This can cause improper weight distribution and helps to prevent overstriding, both of which can lead to inaccurate passes. This technical flaw is a problem that could be coached out of him with work and time.

This is only an early scouting report on Jackson that is more focused on his physical traits and ability. Once I could get my hands on his all-22 film, I’ll take a look at how he is reading the field. For now, Jackson looks like he is the complete package — grading highly on almost all highly coveted physical traits for quarterbacks.

RELATED CONTENT: How to coach defensive backs to play the deep ball