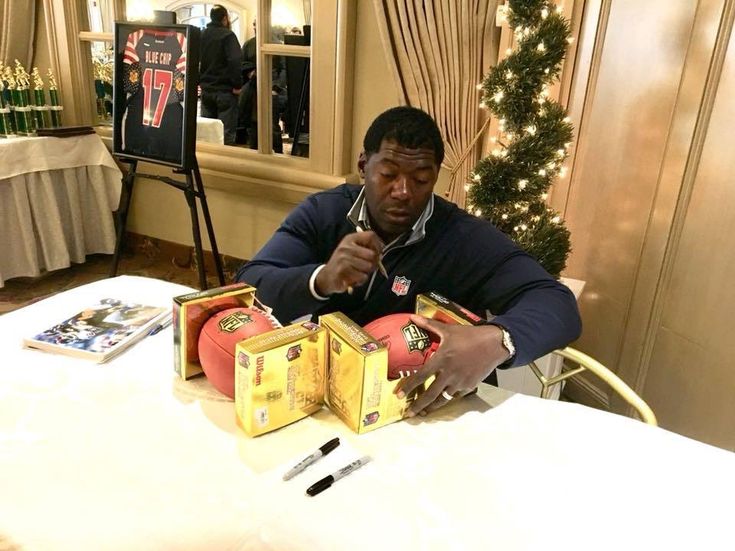 The East Meadow Rams annual awards brunch was already going to be a special day.  Not only were all the players and cheerleaders going to receive their awards and enjoy a great meal with their teammates, coaches, and family, but the 11-12-year-old Pony Team was already excited about picking up their individual Super Bowl trophies.

To make the day even more special, two former NFL players, Roman Oben and Bobby Jackson, attended the brunch to sign autographs and pose for photos with the kids.  They also spent a few minutes addressing the kids, coaches and parents to share their thoughts on the game they love and offer some words of encouragement and inspiration for a room full of youth football players.

Roman Oben is currently the NFL’s vice president of youth and high school football development. After playing at the University of Louisville, Oben enjoyed a 12-year career in the NFL from 1996 to 2008 with the New York Giants, Cleveland Browns, Tampa Bay Buccaneers and San Diego Chargers, including a Super Bowl appearance with the Giants and a Super Bowl championship with the Bucs.

After he spoke at the brunch, I caught up with Roman for a few minutes….

PS: How cool is it to be able to speak at a youth football event like this?

RO: “It’s great. I always talk the values of football participation and the things that you get out of the game itself. I think no matter where your football career lands you, whether you only play in little league, middle school, or high school or you’re fortunate enough to go play in college and play in a bowl game, I think you can get a lot out of the game. I think it’s always good to thank the parents for their involvement because a football parent has just a different level of involvement than most other parents.  You have 20 or 30 parents around all the time versus making drop-off and pickup when practice is over sort of thing.”

PS: What is your message to parents that are on the fence about their child to play youth football?

RO: “I’m always going to say, as a parent, do all your research, make sure your league is a Heads Up certified league and make sure they have safety protocols and heat and hydration protocols. You have to make sure those things happen so if you’re going to play or not play, don’t not play ... because you don’t think that football is good for your son or daughter. If you are going to play, I think just being as educated as possible is the best thing you can do as a parent.”

PS: You spoke to the kids about a concept called “ACE” (Attitude, Concentration, and Effort). Where did you pick that up, and how important is that for youth football players?

RO: “I heard it a long time ago from a guy by the name of Ken Ruettgers, who played (offensive tackle) for the (Green Bay) Packers. We used to do a chapel study and he talked about the things you can’t control and then came up with this acronym. It was pretty cool, so it’s something that can apply to all ages. You can’t control the weather and you can’t control your circumstances, but the things you can control are your attitude, concentration and level of effort that you give and that applies to adults to. It’s something quirky that you learn as a kid, but is something that sticks, so it’s always good to talk about that.” 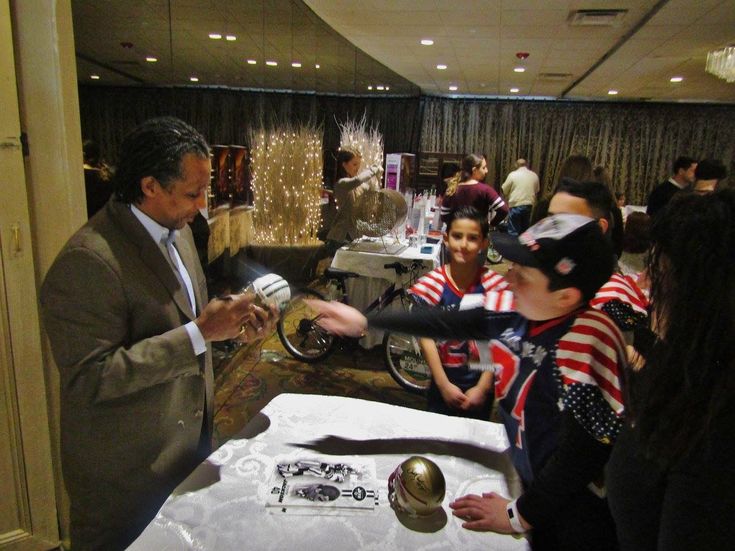 To be fair and balanced, we had a former Giant and a former Jet at the brunch.

Bobby Jackson was an outstanding cornerback at Florida State University before embarking on a terrific eight-year career with the New York Jets from 1978 to 1985. He was voted one of the three best cornerbacks in Jets history (Darrelle Revis and Aaron Glenn) and is currently an assistant coach for Chaminade High School on Long Island.

After Bobby finished signing autographs for the kids, I caught up with him for a few minutes as well.

RELATED CONTENT: 3 ways for parents to occupy their time at practice

PS: What is your main message to kids when you speak at youth football events?

BJ: “The main thing is just to let them know there’s nothing special about me other than I decided to be special. I followed a lot of people before me that helped me like coaches, school teachers, and teammates. They’re as much a part of my success as I am.”

PS: These days, parents labor over whether or not to let their kids play youth football and other youth sports. What is your message to parents about that?

BJ: “First of all, give your kids an opportunity to enjoy their life. If they want to play sports, support them. But make sure they get the proper coaching and training that they need. Let’s face it … you can get hurt driving a car or walking out of your house.  Playing sports can get you ready for life and how to incorporate with other people and work together. You’re missing out on some great lessons by not letting your kids participate in sports whether it’s football or (another sport).”

PS: How have you enjoyed coaching?

BJ: “I love it. It was a little frustrating at first because Chaminade is a school that focuses on academics first, which all schools should. The athletic part … guys need a lot of training, but that’s why we’re here. You can take guys that are academically sound, which is what we want with players and go on to Division I schools and Division II schools and succeed. I’m enjoying it over there. When you see the light goes on and the kids really get it and they perform and win as a team, it’s very gratifying.”

Sunday was a great day for the East Meadow Rams as they celebrated a terrific season from all the boys and girls. While it’s always important to listen when the coaches and parents speak, it was great to see how attentive everyone was when two former NFL players were speaking.

Especially two guys like Roman Oben and Bobby Jackson, who are now giving back to the game of football by working with young players.

Peter Schwartz is a sports anchor for the CBS Sports Radio Network, FOX News Headlines 24/7 and WCBS 880 Radio in New York. His older son, Bradley, plays youth tackle football for the Super Bowl Champion East Meadow Rams on Long Island, while his younger son, Jared, plays flag football for the LSW Giants. Peter, his wife Sheryl and the boys are busy cheering on the New York Jets when they’re not at a youth football field.