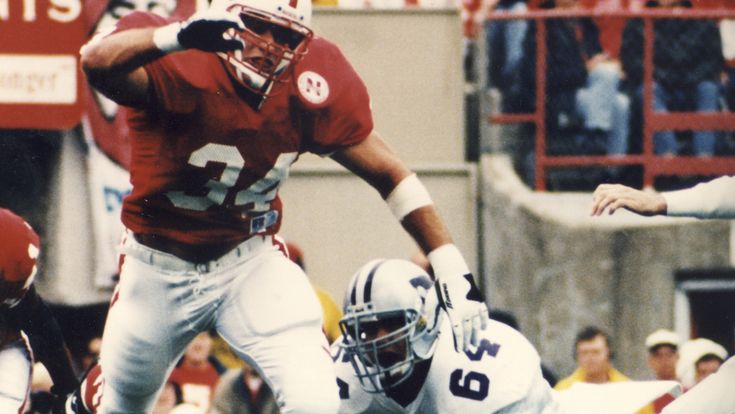 Growing up in rural Iowa, Trev Alberts couldn’t have envisioned the path his life or career would take.

A lifelong fan of the Iowa Hawkeyes, Alberts became an All-American for the Nebraska Cornhuskers. Starting his career in Lincoln, he was as low as ninth on the depth chart, but was eventually taken in the top three of the NFL Draft.

While his career ended prematurely, Alberts earned a place of honor in the College Football Hall of Fame. Once off the field, his natural drive allowed him to succeed in broadcasting and earned him his role as athletic director for the University of Nebraska-Omaha.

Closing in on a decade on the job, he’s carried with him a simple philosophy passed down from legendary coach Tom Osborne – finish. If you start something, finish it. It’s this way of life that has allowed Alberts to find success everywhere he’s gone.

Recently, Alberts took time to talk about his career in football and his current role.

EM: When did you first start playing organized football? Once you put the pads on, how long did it take for you to fall in love with the game?

TA: I think the first organized football I did was playing flag football at the YMCA in Cedar Falls, Iowa. I had an older brother and we lived across the street from a city park, so from my earliest days, we were out there playing football. We were big Iowa Hawkeyes football fans back in the heyday of (coach) Hayden Fry. I don’t know if you can say it was the culture, but everyone played football or watched football. It was what we did.

I fell in love with the game right away, especially once I got into full-contact football. I loved the physical aspect of the game. I liked the fact that you got to hit people and you were actually encouraged to do that (laughs). I think as a young boy, I liked the physical challenge of it, hitting, tackling, competing. All of that appealed to me very early on.

EM: How difficult was it for you to choose to attend Nebraska over Iowa? Also, coming from a small school, how long did it take you to adjust to going to what was then one of the top programs in the nation?

TA: Yeah, it was a difficult decision, to be sure. Probably, for me, faith was – and still is – very important to our family. When Coach Osborne started recruiting me, that faith component was something that really appealed to me and my family. Back in those days, Nebraska was consistently playing in the Orange Bowl for the national championship, and Iowa was still getting its program built. Before there was such a proliferation of football on television, nothing was bigger than Nebraska-Oklahoma on Thanksgiving. Still, that was an excruciatingly difficult decision to make.

When it came to adjusting, it took me a long time, and after the first few months on campus, I was sure that I was not going to make it there. I think I started out ninth on the depth chart at right outside linebacker. But back in those days, we had a freshman team, and a lot of times you would play on the freshman team, then redshirt and be ready to play your third year. After two weeks of practice, Coach Osborne called seven of us aside and suggested we redshirted then because he thought we would be ready to play the next year. At that point, it dawned on me that maybe I could play there and I just had to wait my turn.

EM: In the history of college football, there have been few more important figures than Tom Osborne. It seems that over the years, he’s taken on almost a mythical stature. What was your relationship with him?

TA: I had a great relationship with him. You know, what you saw on the exterior with him is exactly the way he was. He was genuine and authentic. He didn’t do things just for the camera or for the paper. He genuinely cared about his players, especially as students and as people. He was an educational psychologist, so he understood that if the other core areas of your life were in balance, then the football would take care of itself.

He really pushed us in school and wanted all of us to graduate. There were high expectations there with him, and you either adjusted to that, or they would help you find your way back home. There wasn’t a lot of gray area with coach.

EM: What would you say was the main lesson that you learned from Coach Osborne that you still put into practice?

TA: To me, it’s all about finishing. We as a team were taught to finish every drill, every rep, every game. We took great pride in being finishers. If something is important, if you undertake a task, you need to finish it. Right now, I’ve been here in my current role for nine years, and I’m not finished yet. There are still goals that we as a program need to accomplish, so we have to finish the job.

EM: Would you say having that work ethic instilled in you by playing football helped prepare you for life after? I mean, that in broadcasting, to be successful, you have to be willing to put in the hours to work at it. I’m assuming the same can be said for athletics administration, right?

TA: Yeah, I would definitely say that’s true. Coach Osborne instilled in us the need to be persistent and persevere through the difficult things that life throws at you. I never expected to get into broadcasting when I did, but football teaches you that success depends upon hard work. The same can be said for work here in Omaha.

This job takes a lot of work, and everything you do, you have to have the student-athletes and the university’s interests at heart. But being willing to put in the work will always have you prepared to meet the challenges that come your way.