Consider using these plays from the University of Memphis running game 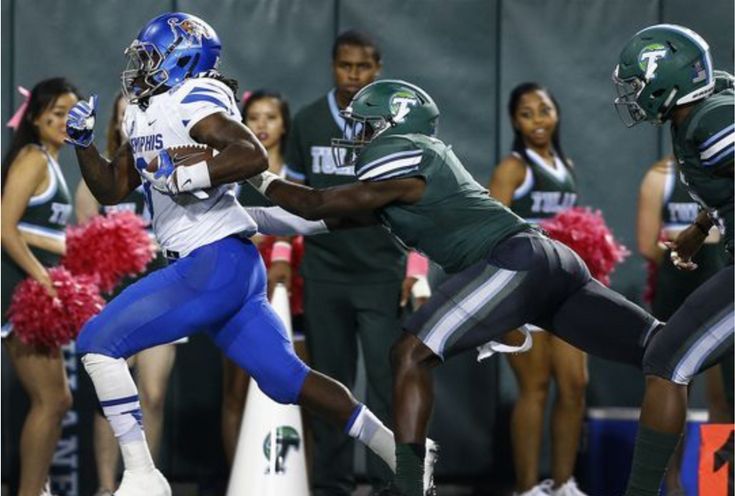 The University of Memphis offense ranked fourth in the nation in total yards in 2017 with 6,719 yards and averaged 532.1 yards per game. Head coach Mike Norvell runs one of the more interesting offenses in the country. He had a few exceptional athletes, including quarterback Riley Ferguson, wide receiver Anthony Miller, and running back Darrell Henderson but their offensive success was predicated on creativity, aggression, and synchronicity.

The Tigers averaged 197 yards rushing per game with a punishing offensive line and an exotic system of run plays. Though Norvell put his own twist on each of the concepts, his running game consists mainly of outside zone, inside zone, and counter play. He has creative ways of adding an extra blocker into most of his concepts that gives the offense a numerical advantage.

Traditional counter plays feature the playside of the line down blocking while two pullers come from the backside to kick out the end, and lead up the playside linebacker. The backside guard is responsible for the kickout while either the tackle, tight end, H-back, or fullback would be the lead blocker.

Memphis will run counter with three blockers coming from the backside.

The offense lined up with the tight end attached to line on the left with an H-back two yards behind him. When the ball is snapped, the running back took a counter step toward the left before he came back to the right to receive the handoff.

The defense had to respect the pre-snap alignment of the tight end and H-back and had extra defenders on the left, which is why they were completely outflanked by the pullers on the right side. The key is being able to block the backside pursuit. The tight end of the play was probably trained to get to the safety from the backside, but against all the defenders on the line of scrimmage, a more sound strategy might have been to step down to at least slow down one of the linebackers. Henderson had to narrowly avoid a tackle in the backfield to make this play work.

If defenses don’t properly adjust to the extra gaps, created by the alignment of the tight end and H-back, then Memphis can punish them with inside zone with an insert block.

On this play, the defense had four defenders to the left of the center to match up with the four blockers on that side (guard, tackle, tight end and H-back). This means the offense had favorable numbers because it had enough blockers to cover everyone.

The fly sweep motion gave them a greater advantage as it widened out the end, outside linebacker, and cornerback. This left a gaping hole for the H-back to lead through. Henderson cut the play back and no one touched him on the way to a touchdown.

Norvell paired this concept with a bubble screen to the playside so if the contain player is on the line of scrimmage, Ferguson could throw to the screen. Since the contain player was out of the box, he made the right decision by handing the ball off. The playside guard blocks the 4 technique and everyone else zones right. The tight end on the backside “sifts” to the backside linebacker and the tackle kicks the end out on the backside, which opened a hole for Ferguson.

You don’t see a lot of 2-back outside zone anymore, especially out of shotgun, but Memphis runs it with a bubble screen tagged on the backside. The lead blocker helps against the playside contain defender.

Technically, the offense has trips to the field side with the twins and back on to that side so the defense has to set its strength there with the strong safety. By running toward the boundary, they once again outflank the defense with a lead blocker.

At first glance, I thought this was a one-back power play that was read really well by the guard and running back, who both took the play outside. However, ex-NFL lineman Geoff Schwartz brought up a good point: the guard didn’t skip pull with his shoulders squared like he would on a power play. Instead, his shoulders were pointed outside.

The back started with a vertical path to suck the defense in before bouncing the play outside. The tight end who blocked the contain player didn’t make a perfect block, but he got his head on the outside, which allowed the play to bounce. After Henderson passed the line of scrimmage, he made a play on his own by cutting back against the grain for huge yardage.

Norvell included many different types of runs with his own twist in them into his system. However, the offense executed all of them at a high level. Their blocking technique and fundamentals are top-notch and Henderson almost always made the correct read and the correct hole with great timing and speed. Creativity and volume are great, but they don’t mean anything without fundamentals. Memphis has all of those elements.