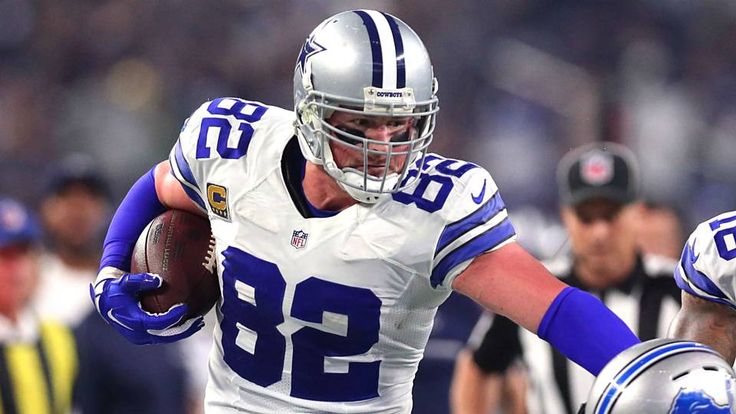 While studying the Dallas Cowboys offense this offseason, one particular formation stuck out to me. The Cowboys will use a traditional trips formation, with a slight adjustment. The difference is the use of the stack alignment with the No. 2 and No. 3 receivers. This simple adjustment allows the offense to get free releases for the two slot receivers, while maintaining the full field stretch of the traditional trips formation. The formation is shown below.

One of the Cowboys’ base plays is the “H Post” concept. They will call this play a few times a game. The play is designed to get the slot receiver inside leverage for a slant route. The route will typically take a slower release. The slower release allows for the inside route to clear any inside linebackers.

The video below shows the Cowboys completing this route in 2017, but without the stack alignment:

The H post concept is a common third-down call for the Cowboys. They line up in an empty set on this occasion. The Los Angeles Chargers call a pattern match fire zone blitz (Cover-3 for the secondary). This coverage often asks the slot defenders to pay with outside leverage to help funnel verticals inside to the safety. This particular defensive call is very susceptible to the H post concept for that reason. The inside leverage for the slot is what allows this concept to work.

Without any inside help defenders, the quarterback has a relatively large window to fit this throw in. A traditional Cover-3 would have an extra hook defender in place to better defend the play. Instead, the Chargers elected to rush five.

The Cowboys called this concept out of the two-man stack against the Denver Broncos in 2017. The teaching of the concept remains the same; the difference is the alignment and spacing of the routes. The play is diagrammed below: 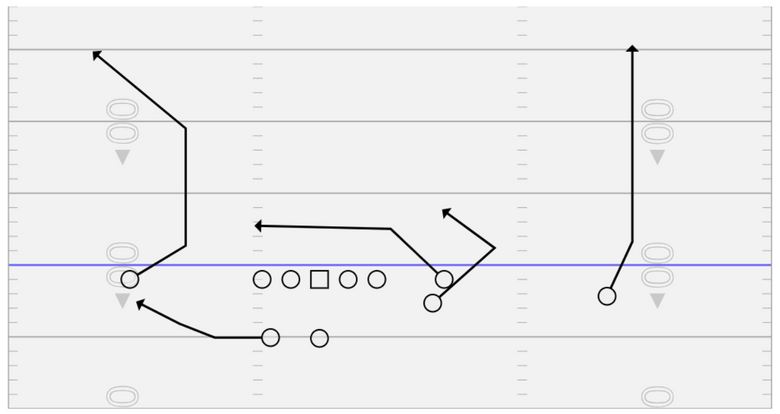 The play is essentially the same, with a minor adjustment to the formation. The stacking of the No. 2 and No. 3 receivers (two most inside receivers to the trips side) gives the offense free releases for those receivers, as well as the inside leverage for the “H Post” route.

The video clip below shows this concept against a Cover-1-robber look from the Broncos. The post route is able to win inside, based on alignment.

The Broncos studied up on the concept, and taught their robber to ignore the drag route, and jump the post route. Cowboys quarterback Dak Prescott notices this, and resets his feet to find the drag route (his second read in the progression). This clip is great teaching tape for teams that use the H Post concept.

In the same game, the Cowboys made an adjustment to the H Post concept out of this stack formation. They cleared out space with the outside release of the slot, and tagged the inside breaking receiver on a whip route.

RELATED CONTENT: See how the sluggo-win concept works at the college and pro football levels

The initial stems look like the H Post concept. The defender jumps the drag stem, leaving Jason Witten open on the whip route. I am not sure what Cole Beasley is trying to do here. He does not do a good job of clearing space for the whip, and allows his man-to-man defender to tackle Witten short of the first-down marker.

The Cowboys will call the “All Curl” concept out of this stack set as well. 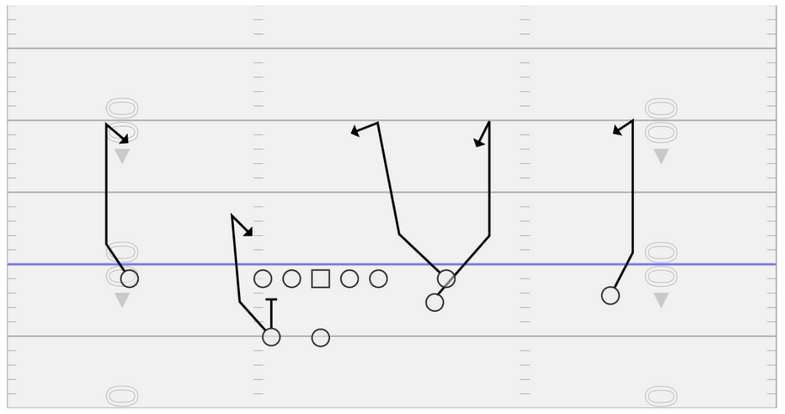 The play is designed to flood the four underneath zones of a Cover-3 with five evenly spaced targets for the quarterback. Against two-high safety defenses, the play is designed to isolate the inside receiver (in this case, Witten) on the middle linebacker. Against man coverage, the outside releasing slot receiver becomes a good option. With the free release, he can threaten the defender vertically. This creates separation for the curl route.

In this clip, the Philadelphia Eagles play with two high safeties. This leaves Witten in a 1-on-1 matchup in the underneath zone against a linebacker. With Witten’s elite route-running ability, this matchup favors the offense.

This two-man stack version of trips has quickly become one of my favorite formations. Keep an eye out for another article in the coming weeks that shows how Los Angeles Rams coach Sean McVay uses this set.