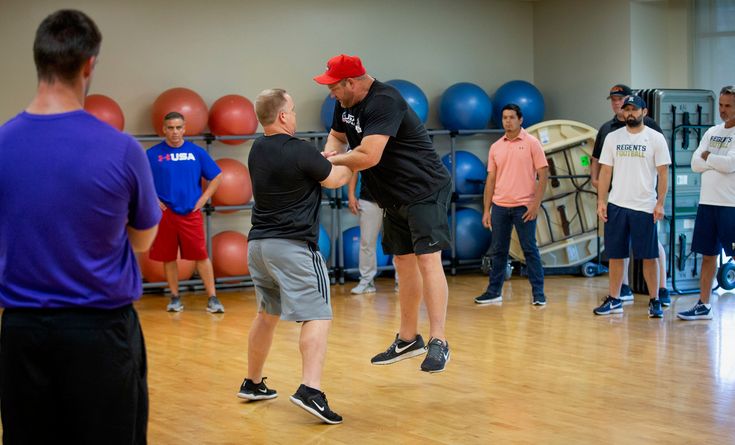 Burt Stuart lifts Scott Peters off the ground Saturday as he demonstrates drills for coaches to use with their offensive linemen during Saturday's USA Football Contact System clinic at University of Texas Arlington.(Photos by Mike Fender)

Coaches from the youth, middle school and high school levels met Saturday at the Maverick Activities Center on the University of Texas Arlington campus to learn better technique for blocking and defeating blocks. They came away impressed with what they heard and saw.

The coaches came from Texas, Oklahoma and New Mexico and took part in a three-hour public clinic. Scott Peters, who created the USA Football Contact System, took the coaches through the principles of the technique with a presentation. Coaches then broke up into offensive and defensive groups, and practiced several of the hands-on drills with each other. 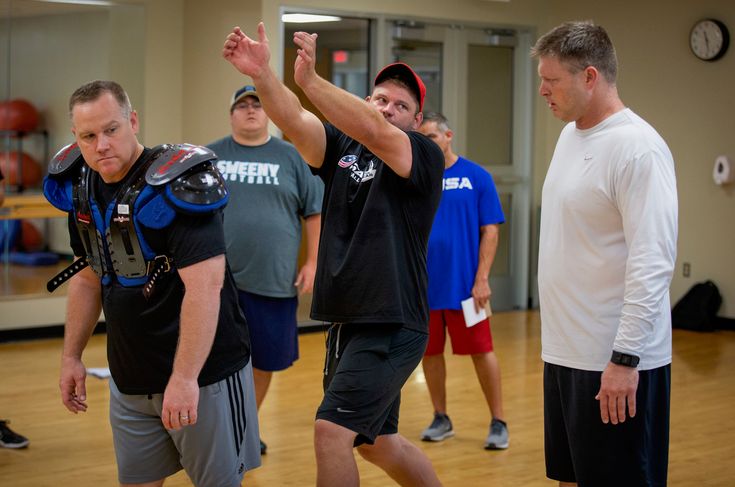 Scott Peters demonstrates drills for coaches, including Doug Wheeler, right, from Aledo, Texas, to use with their offensive linemen during Saturday's USA Football Contact System clinic.

“I’m a learner not just by listening and seeing it, but I need to do it,” said David Stevens, who is a sixth-grade coach in the Aledo (Texas) Youth Football and Cheer Association. “I’ve got a son that plays football. I coach football. Our association’s been involved with USA Football for a while. I thought this would be a good opportunity for our kids to learn, so I came here for an education for myself that I could pass along to our kids.”

Anthony Floyd, who coaches in the North Texas Predators Football and Cheer Youth Association in Kennedale, saw plenty of value in teaching the Contact System's nuances to players at a young age.

“It’s going to give your kids a competitive advantage on the field because most young kids don’t understand leverage, don’t understand how to get off a block, and it helps kids stay away from head injuries,” he said. “You want to do everything you can to be a better coach for the kids. I coach youth, so I want to make sure I give them the best I’m giving them with regard to being able to perform.”

David Parrish, who coaches sixth-graders in Katy (Texas) Youth Football, brought his son, Deacon, who plays in the league. Deacon also took part in the clinic, including the hands-on demonstrations. 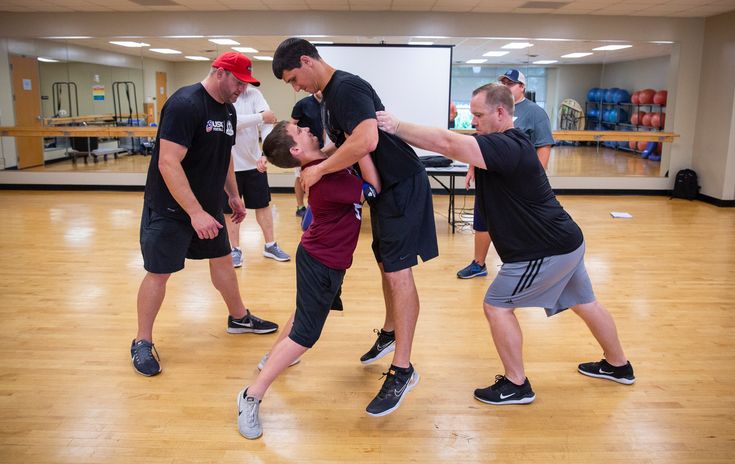 Deacon Parrish, 11, from Katy, Texas, lifts his father, David, during a contact drill at Saturday's clinic. Scott Peters (left) and Burt Stuart assist in the drill.

Deacon’s older brother, Landon, was taking part in the Middle School Bowl Games Series, so David thought his was a good opportunity to learn something new while Landon practiced for Sunday’s games at The Star in Frisco.

“I’ve watched the USA (Football) certification videos, and I saw the technique that was being promoted, I thought it was a really sound technique, so I wanted to come and learn more,” David Parrish said. “There’s good value that you get off watching the videos, but when you get here in the clinic and you actually get your hands on somebody, feel the technique and embrace the power of your own hips, it’s easy to teach at whatever grade level you teach.”

Peters encouraged coaches to watch the videos, and then attend a clinic to get the most out of the available resources to learn USA Football Contact System, and then impart that knowledge to their players.

“They complement each other,” Peters said. “The videos are awesome, because you can get all the details, and you can reference them. Here at the in-person clinic, you’re getting to feel it from people, from our instructors, who know it inside and out, so I think they work together very well, but there’s no question that having that in-person experience is unlike anything else.”