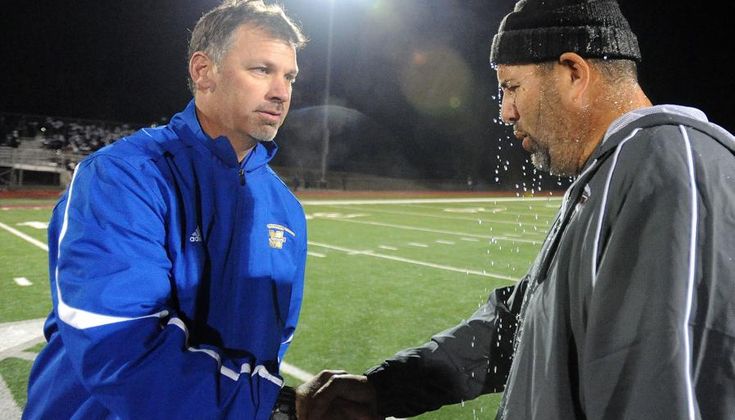 I recently had the privilege of spending time with a former college teammate and roommate, coach Kyle Hockman of McEachern High School in Powder Springs, Georgia.

The son of Ohio high school hall of fame coach Ken Hockman, Kyle has 29 years of coaching experience, from the NCAA Division I and II levels at West Virginia, East Carolina, Millersville and East Tennessee State, to high schools with 110 boys to his current position at a Georgia powerhouse.

A self-described lifelong "wannabe quarterback," Kyle was a tight end for us at Bowling Green State University from 1986-89. Over the years, his fascination with the QB position has allowed him to develop a highly successful offensive system. In fact, it's so successful that it's helped his last seven quarterbacks earn college scholarships. One of them is his own son, Bailey Hockman, a redshirt freshman at Florida State.

While spending the day filming "The Kyle Hockman System," which will soon be available to coaches throughout the country, I asked Kyle to speak beyond the X’s and O’s. Specifically, to share his wisdom and philosophy to coaches on how to develop a winning staff.

While I’m incredibly impressed with Kyle’s offensive knowledge, I walked away even more impressed after hearing his unique perspective on building a program with the help of other great men built for serving others.

Kyle began by recommending that you “develop a vision for your program that transcends football.” That vision should be based on transforming lives. Once you have this vision, share it with your administration. Sell them on the fact that your mission is to transform lives through the sport of football by “building men.” And in order to fulfill that mission, you need great men as coaches. You need mentors.

From there, Kyle recommends being proactive in making your administration aware of great candidates who'd help fulfill the mission. He recommends you don't “wait until it’s too late and learn after that fact that a social studies teaching position has been filled by someone that could've been given to a great coach you’ve developed a relationship with.”

When Kyle meets with a prospective assistant coach, he says he doesn’t discuss much football with them. Rather, he wants to get to know who that person is and why they want to coach. He isn’t interested in someone who only wants to coach to fulfill some unrealized competitive itch, but someone who understands the bigger picture of being in a position to help young people bridge the gap between adolescence and adulthood by teaching them life lessons through sport.

Kyle said at McEachern, “We speak openly to our kids about alcohol and drugs. We have a former player that speaks to our kids ‘often’ about his past marijuana use and how it’s affected his life.” He also said they speak to their kids about race issues, how to treat women and other social matters kids deal with daily in today’s world.

Kyle was very animated when he said, “Yes, we want to win, but we want to win by building men in the process, and I can’t do that myself. I need good men on my staff that can help me do that."

In hiring these great men, Kyle puts a lot of emphasis on looking for people who can respectfully disagree. He suggests, “As a society, we've lost the ability to have dialogue with others, listen to others and respectfully disagree with them.” He also said, “I want men who can sit down together and share their opinions. I don’t want a bunch of yes-men.” Kyle insists, "We won’t get any new ideas if people are afraid to share their thoughts and ideas."

Finally, Kyle encourages his coaches and outsiders to “pour into our kids.”

“We have great people within our staff and football community that have tremendous wisdom to share. We want this wisdom to be heard. We have a coach who's a former Green Beret. We have a coach who's a former player and current lawyer who has great wisdom. We recently brought in a surgeon from Duke University Health who played for our program, a man who used to sit right where those kids are sitting now. We want our kids to see firsthand what's possible for them. We also bring in former players currently playing in the NFL. Our kids need to learn from the wisdom of these men.”

After spending several hours with Kyle, learning his offensive scheme, being around his staff of “great men” and listening to his perspectives that transcend far beyond the X’s and O’s, deep into the lives and hearts of his players and coaches, it comes as no surprise he's twice been named Cobb County Coach of the Year and that his program is a perennial championship contender in Georgia’s 7A ranks.

In fact, Kyle’s program has been so successful that his former players can be found on the current rosters of 63 college programs throughout the U.S.

Regardless of the wins and losses, it’s incredibly heartwarming seeing a lifelong friend win in the lives of so many future leaders of our society.

My parents always told me to choose my friends well. I certainly didn’t miss when I chose this one.

Eric Smith is a former NCAA Division-1 quarterback and high school football coach. Eric is the owner and director of The Winning Edge Quarterback Academy, where he coaches and mentors aspiring quarterbacks in Durham, North Carolina. He also hosts quarterback/receiver skill development camps throughout North Carolina and Northern California. He's also a certified leadership speaker, trainer and coach for the John Maxwell Leadership. To connect with Coach Smith, visit winningedgeskills.com, email him at winningedgeqb@gmail.com or follow him on Facebook and Twitter @winningedgeqbr.