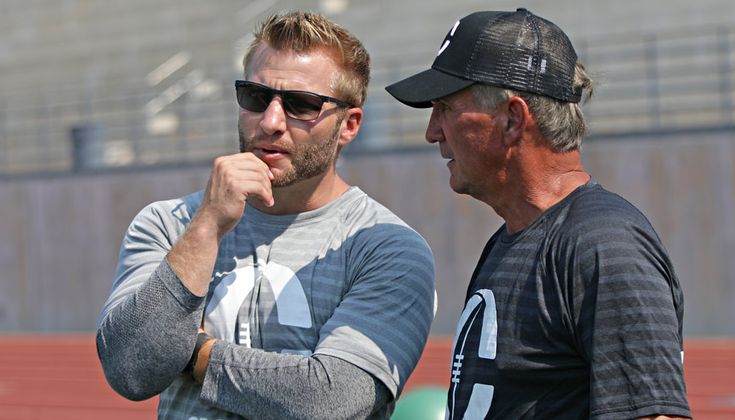 Believe it or not, Twitter could actually be an amazing avenue for learning, you just have to follow the right people. A year ago, I came across an account with the handle @QB_Collective. I’d never heard of the organization, but they caught my attention because their timeline was full of unique, in-depth content about quarterback play.

What really made the account stand out were clips that included coaching from some of the best minds in football, such as:

Functional use of “bags” to train QB’s to play with a proper base. Keep feet on the ground - short steps on the balls of feet to move w/ a base. Never be on your toes #QBCollective #QBCClass18 pic.twitter.com/Y0vGkOuaTE

Sean McVay delivers a message on the powerful role authenticity plays in leadership. Be passionate and be yourself #QBCollective pic.twitter.com/pDTPjGQc37

Last week, I got to attend one of the QB Collective camps in southern California. Some of the most highly recruited quarterbacks in the nation were in attendance, including Caleb Williams, Hank Bachmeier and DJ Uiagalelei.

“Just being able to be around NFL coaches that teach the most elite in the sport was an honor,” Bachmeier said. “The stuff the coaches were teaching us were the same stuff that pro quarterbacks are being taught. It's just awesome to have them at a camp for a few days and pick their brains.”

QB Collective founder Richmond Flowers III had a short-lived NFL career, but had an eye-opening experience when he coached in the league under Mike Shanahan with the Washington Redskins.

“What I learned during those four years under Mike Shanahan as a part of that staff has become so significant, it’s driven me to remain focused on building this vision. I realized how much it could have helped me had I learned to study the game properly or developed a better understanding of how to see the game through the lens of a coach," Flowers said. "But the real point is not just any coach, it’s specifically through the lens of what I experienced while coaching in Washington. The culture that some have referred to as the 'Redskins Lab,' it was such a profound experience in my life and it was also very apparent I was a part of something monumental, given the talent on that staff. That’s the point, that’s the perspective I would like these young athletes to understand. This type of knowledge would change their lives, and it’s what they’ve been looking for. I know because I was in their shoes."

Flowers aspires to scale this perspective so these athletes have a better chance of accomplishing their ultimate goals by introducing them to this overall philosophy and proven pro-style techniques and fundamentals.

“After five years coaching in the NFL, it became clear I could have been half as talented and played twice as long if I could have understood this stuff when I was in high school,” he said.

When I was there, the camp had a circuit of drills set up, led by coaches like former NFL head coach Jim Zorn. The drills were designed to work on higher-level mechanics not typically taught in high school.

“From a physical standpoint, I learned how to create power when there are defenders around,” Bachmeier said. “You can't always have a perfect pocket, but by keeping a base to utilize the ground to create force in imperfect situations is big.”

On the field, camp participants don't go through flashy drills you sometimes see on social media. Instead, they learn about core fundamentals at a more in-depth level. They focus on teaching the right things, and on actual teaching rather than self-promotion, which is too prevalent in the private quarterback coaching world.

“We want to connect what you practice on the field with what actually happens in a game,” said Will Hewlett, another QB Collective coach. “I think that’s where the breakdown happens with a lot of coaching, that there is no translation with what you are teaching into the actual game.”

While there's no doubt the quarterbacks improved with the drills and circuits, the classroom portion is just as (or even more) vital.

“We want to have these kids come in here and learn a deliberate way of watching film, studying defenses and understanding fronts, gap responsibilities, coverages, what the defense is trying to accomplish, so that as a quarterback you could identify that and then start to understand their rules and how you could use those rules to be more efficient” Flowers said.

Camp participants learn about about the run game, how defenses try to stop certain runs and blocking schemes.

The great QB’s understand defense as if they were a coordinator. Learn the process, learn from the best. #QBCollective #MikeShanahan pic.twitter.com/cjl0ultcDn

QB Collective coaches want to raise the standard for the overall knowledge base that quarterbacks are taught. They want to create true field generals by introducing them to high-level concepts on the chalkboard and in the film room.

“One thing that I took away was to always take your first progression until the defense takes it away,” Bachmeier said. “It sounds simple, but having confidence in making a throw and believing in making the right decision is big for me. There's no gray area. He's either open or covered. Don't make a halfway decision.”

The role of quarterback is different. Like it or not, they must accept the leadership role for their respective teams. QB Collective also focuses on this aspect, with lessons about what it means to be a leader.

Flowers says QB Collective has two main objectives. The first is to give young players a better opportunity to succeed, but the second is even more important.

“Our overall vision is to raise the level of standards in the private coaching industry, by offering everyone a chance to better understand what coaching excellence really looks and sounds like," he said. "In my mind, you do this by focusing on quality of coaching and the overall development of the coach. The coaches are the stars, their knowledge is the currency. Keeping the focus on coaching talent and development will allow everything else to fall into place.”

Hewlett is a testimony to the service the organization could provide for coaches. Hewlett has no professional experience as a player or coach, but his connections with the QB Collective coaches accelerated his development as a coach exponentially.

“Access to that through the QB Collective has been invaluable and unreal. I’ve been able to soak up a bunch of techniques, philosophy and little things,” Hewlett said.

The organization has bigger plans, and will be more accessible to coaches as they grow. The focus on helping coaches should make them another resource for coaches who are looking to improve. They recently partnered with Teamworks, which usually works exclusively with NFL teams, to help bridge the gap between their support systems and athletes and coaches.

“As (Flowers) continues to cultivate this valuable community, we’re excited to find innovative ways to better connect quarterbacks with the best in the game.” said Zach Maurides, CEO of Teamworks.

A larger plan to grow is in the works, but for now, you can check out @QB_Collective to get a clearer look at this movement.

Social media has created a monster when it comes to QB training leaving parents & athletes at a disadvantage. We take guess work out of the equation by bringing forward coaching/education you can trust ensuring maximum return on investment #QBCollective #RichScangarello #49ers pic.twitter.com/w04llRNMy4