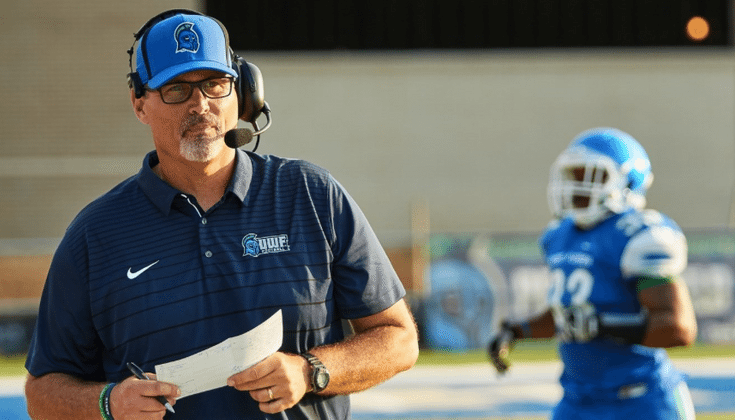 After a successful seven-year run at NAIA Azusa Pacific, which included five postseason appearances, Pete Shinnick moved to NCAA Division II UNC Pembroke in 2006 to restart its football program after a half-century hiatus.

After a 4-7 initial campaign, Shinnick went 9-1 in his second, and had a 50-24 record and two playoff berths in seven years. Then, with plenty of options available, Shinnick decided to start another program from scratch, this time at D-II West Florida in Pensacola.

"That's a question my wife asked me a lot, 'Why would you want to do that again,'" Shinnick said. "It really is a hard, long process, but I was very excited about what the people at UWF were saying and what we felt the future could be."

Fundraising is critical when starting a new program, and after Shinnick was hired, he embarked on a major push to encourage possible donors and corporate partners.

"I visited and talked with a lot of people, really presented the vision of where we saw the program going, and laid a lot of the groundwork for where we are now and the support we're getting," said Shinnick, who played at Colorado for Bill McCartney, whose staff at the time also featured Les Miles and Gerry DiNardo. "I give our administration a tremendous amount of credit for what they felt we could add to an already great university and athletics program."

In a state rich with football talent, and intense recruiting competition, getting those first athletes to come to a program that'd never played a game meant tireless effort.

"I'm not going to sit here and say it was easy," Shinnick said. "You have to paint a great picture and sell that vision. It's fun to talk to a lot of the guys who were part of that first recruiting class, who say, 'Yeah, it lived up to what you said it would.' To go to the national championship in our second year, that's pretty good, but I think it's about how we treat them and the culture we created that enticed a great group of guys, and we just built from there."

Crazy to think this was 2 years ago. We didn't have pads, helmets or anything. Just a bunch of guys who liked to work hard. Who would've known this program would come this far this fast. #UWFFootball #NationalChampionship pic.twitter.com/ppMUsgJiCH

It was a unique challenge for that first class, which put in all the work without the reward of game day during the 2015 football season.

"That's a hard year. It really is. It's like three spring balls back-to-back-to-back. Not a fun process," Shinnick said. "But we grew a lot, had a lot of guys step up and many of them are core figures in our program."

Entering the final week of the regular season last fall, West Florida sat 6-3, with two losses against their only ranked competition (Delta State and West Alabama). The Argonauts notched a 34-29 victory over No. 24 West Georgia in that finale, and used it as a springboard to four straight road playoff wins, including a 27-17 semifinal triumph at No. 3 Indiana University of Pennsylvania.

Celebrations ensued on campus, and a big caravan of fans made its way to Kansas City for the title game.

"The community really rallied around us. It was a lot of fun," Shinnick said. "We saw more and more people show up, and different establishments around town held viewing parties. I've been around on the speaking circuit in the offseason, and everybody talked about the excitement. It blew me away how engaged everybody was."

Success also led to a different perception on the recruiting trail.

"The first couple years, we were new to Florida, and I think high school coaches wondered what we were building. We had to develop a lot of relationships," Shinnick said. "Now with that recognition and what we did, it changes the game a little bit and how they view us, and with transfers coming in. We've definitely seen the results."

"I'm excited about our guys. They know everybody will be looking at us differently, that people will be out to knock us off, and they embrace that," Shinnick said. "We have a lot to prove, and look forward to the opportunity."