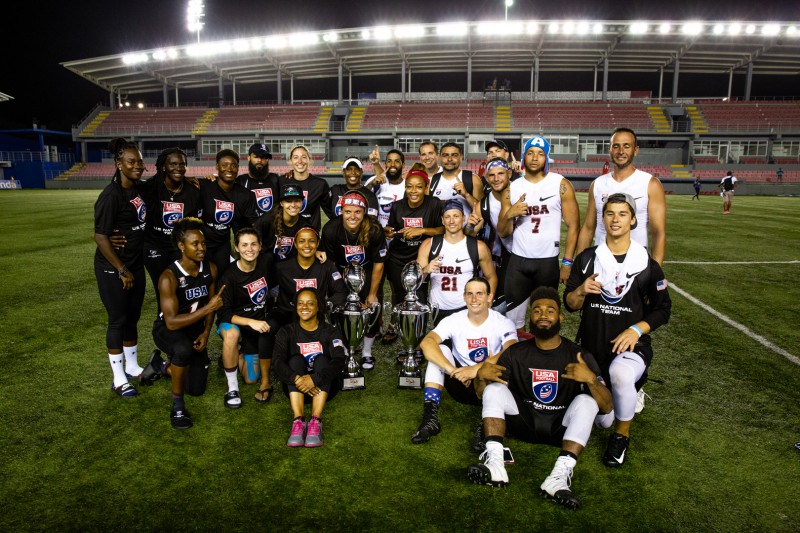 The Americans’ success marked the second time that a country stood atop medal platforms for both men’s and women’s divisions in IFAF Flag World Championship history (France, 2006). The 2018 event was the ninth world championship, which was established in 2002 and is held every two years.

The U.S. men arrived in Panama among an 10-nation field to defend its gold medal-finishes in the past two world championships (2014, 2016). The American women – one of 11 women’s national teams competing in Panama – sought to avenge their 5th-place finish in 2016.

The IFAF World Championships kicked off on Wednesday, August 8, with a press conference welcoming athletes and discussing the global and brilliant future of flag football. The night concluded with opening ceremonies, where teams were able to get their first glimpse of the competition.

The U.S. teams arrived in Panama four days prior to taking the field, using Monday and Tuesday to practice and get acclimated to the Panama heat and humidity while also serving as instructors at a youth football camp Tuesday afternoon. Wednesday was an off-day to rest and mentally prepare for the world’s top competition.

Thursday, Friday and Saturday saw the U.S. Men’s Team playing five pool play games while the women played four. Both teams went undefeated but neither was without its struggles. Defensive play was a little behind the offense in both cases, where a lack of chemistry was an obstacle, but not insurmountable.

Come Championship Sunday, both teams clicked at a high level. The first games were a little slow, with the men defeating Israel and the women Japan by a decent margin.

By the semifinals though, both teams were able to put together complete games. The women defeated a very good Canada team, 46-32. The men defeated Denmark handily, jumping out to a 34-0 lead at one point against a team that they beat by only one point in pool play two days earlier.

Setting the stage for the women’s championship game, fans filled into the stadium to roar for host Panama, the IFAF Women’s World Championship defending champions. The U.S. women knew they would have to play mistake-free football to dethrone the reigning champs, and they were up for the challenge.

Panama opened with opened with a touchdown on its first drive, but the U.S. would respond with an amazing diving catch in the endzone by Michell Roque to go up 7-6 early. Panama would score once more, but the U.S. responded with three consecutive touchdowns to Sheneika Comice, Rebecca Crabb and Michelle Roque to end the game 27-12 in a game filled with big plays.

The men followed suit against a strong Austrian team where neither squad could find the endzone early. The United States opened the scoring with a beautiful catch and throw from quarterback Eric Holliday to wide receiver Greg Meek on a 4th-and-long bomb from endzone to endzone to go up 6-0. Austria responded with a score of its own, leaving the United States one play remaining before half to score, setting up possibly the play of the tournament for big play receiver Terrance Fox.

With no time on the clock, the United States sent only one receiver out on a route, needing 45 yards to score with 3 defenders between him and the endzone. Fox proceeded to dip his way through the first two defenders and juking out the third for a touchdown and celebration worthy end to the first half for the Americans, going up 13-6. Fox would score again on a beautiful pass early into the second half, with Austria scoring one last time but it was too little, too late, as the U.S. ran out the clock with a 19-13 victory for its third consecutive world championship. The U.S. Men’s three-peat was a first for any country in IFAF Flag World Championship history on either the men’s or women’s side.

The United States won its share of awards as well, with the women’s quarterback Vanita Krouch taking home the tournament MVP. “The feeling of winning gold and to be the first (U.S. Women’s Team) to win gold was so surreal. To us, right now, it is our Olympics,” Krouch said. “The event itself was amazing. The facilities were nice and the Panama crowd and staff were awesome. What an incredible country of love and support for their athletes. It’s so cool – they even televised the game live.”

On the men’s side, several men would walk away with hardware. Terrance Fox was named the Gold Medal Game MVP, Greg “Ghost” Meek earned tournament MVP, Chase Junker was named best rusher and Frankie Solomon was honored as best defensive back.

Jorge Cascudo, quarterback of the men’s team making his fifth appearance while winning his third gold medal, couldn’t have been happier with the tournament results. “Winning gold and representing your country in a sport that you love is a dream come true,” Cascudo said. “Sharing that moment with some old and new faces was priceless. Panama spared no expenses, they really went all out in this one. From the day we landed until the day they took us back to the airport, they were really prepared for this one. The hotel, the field and stadium, and especially the opening and closing ceremonies were priceless.”

The United States will look to build off these performances entering the 2020 IFAF World Championships to be held in South Korea.