Creating misdirection with the split zone end around 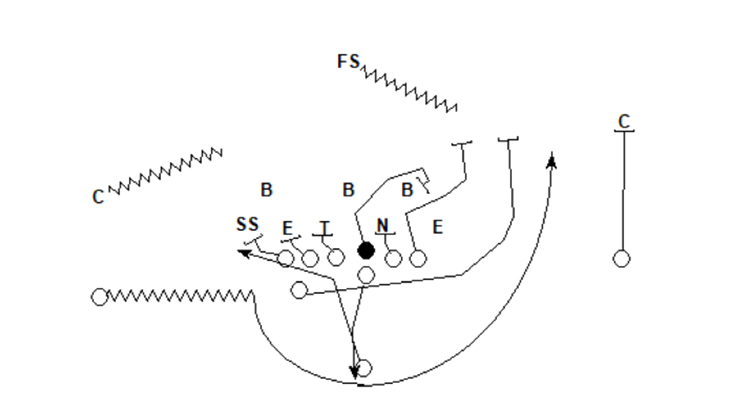 All great offenses have some element of misdirection. New Mexico’s offense created misdirection with the triple option. While there are many advantages to that style of offense, there are other ways in which teams without running quarterbacks can create misdirection in the running game.

One of those ways is with the split zone end around series. Teams without a runner at the quarterback position can utilize this series to create misdirection in the running game while still maintaining an effective passing game, something option teams struggle to do because of the skill set of their players.

The first of the plays in this series is the end around itself. In the 2016 season, the Pittsburgh Panthers averaged 26 yards per play on this concept. Here is a diagram of the play: 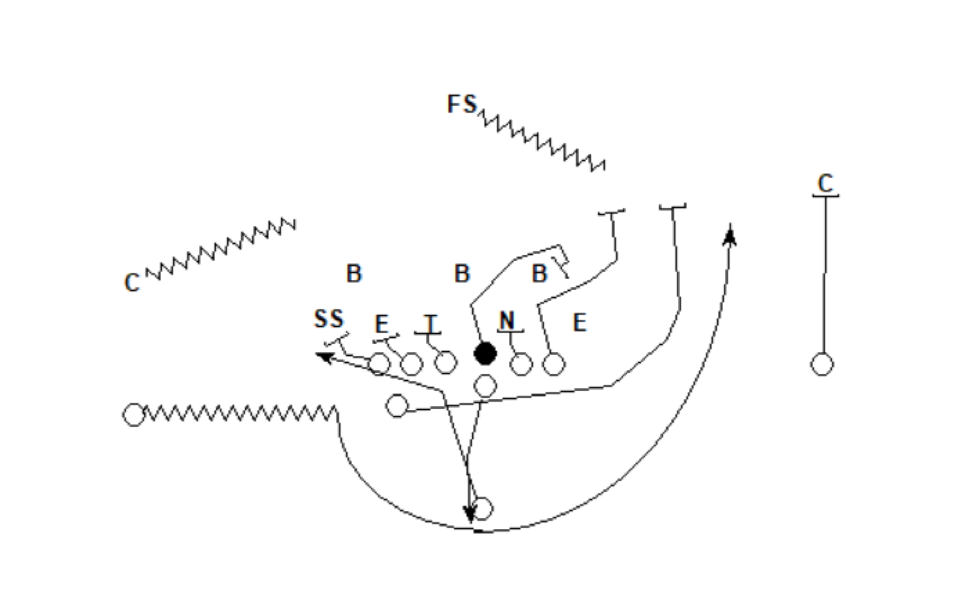 The QB will fake the inside zone handoff to the running back and then hand the ball to the receiver on the end around. The fullback will come across the formation as if he was going to kick out the backside end before wrapping around him to the second level to block the first defender that shows outside of the end.

The free safety flies down towards the box so the fullback kicks him out on his wrap block. The backside tackle and center are both uncovered so they peel back to block for the end around after climbing to the second level.

There is no one in position to run down the receiver on the end around so the center keeps working up the field to block for the end around. However, with everyone except for the free safety sucked in by the inside zone fake, the backside tackle and center don’t even have to block anyone for the receiver to go untouched on the long touchdown run.

After running the end around a few times, the offense can then go to the split zone with a fake end around when defenders are chasing the action. Below is a diagram of this: 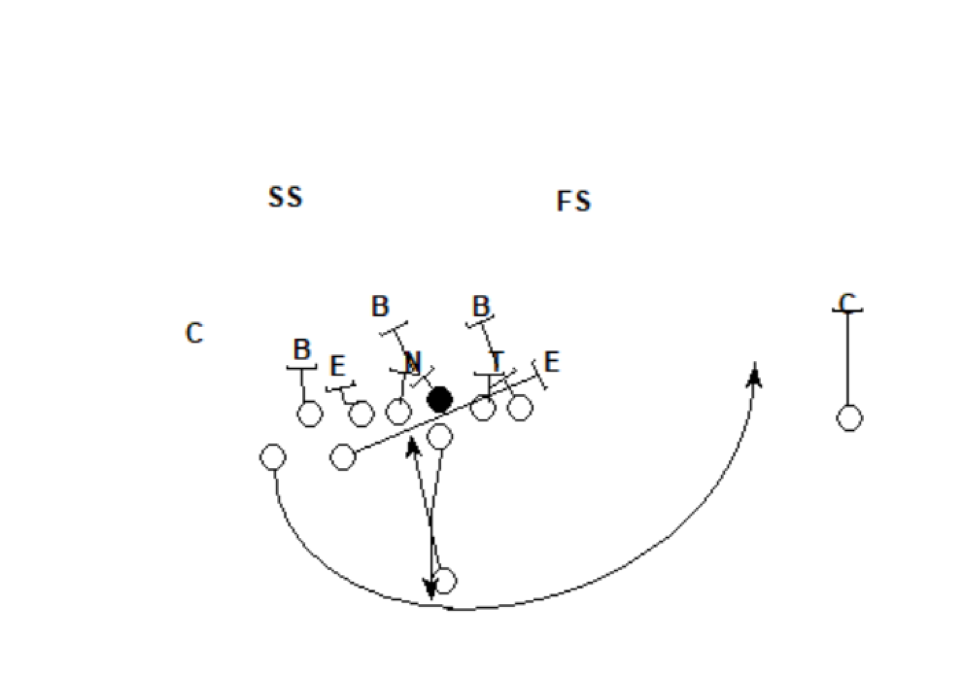 The play looks almost the same at first as the offensive line is just blocking inside zone now and the fullback will now kick out the backside end rather than wrapping around him. Below is a video of this play:

The fake end around action here has a similar effect to New Mexico’s split zone with triple option presentation. The action helps keep the backside end wide to give the fullback an easy kick out block. This action also removes the backside linebacker and backside safety creating a big cutback lane for the running back inside the fullback’s kick out.

After running the split zone with a fake end around, the offense can then go to the play action off of this same action. One of the most popular concepts ran off of this action in the NFL is the yankee passing concept. Below is a diagram of this: 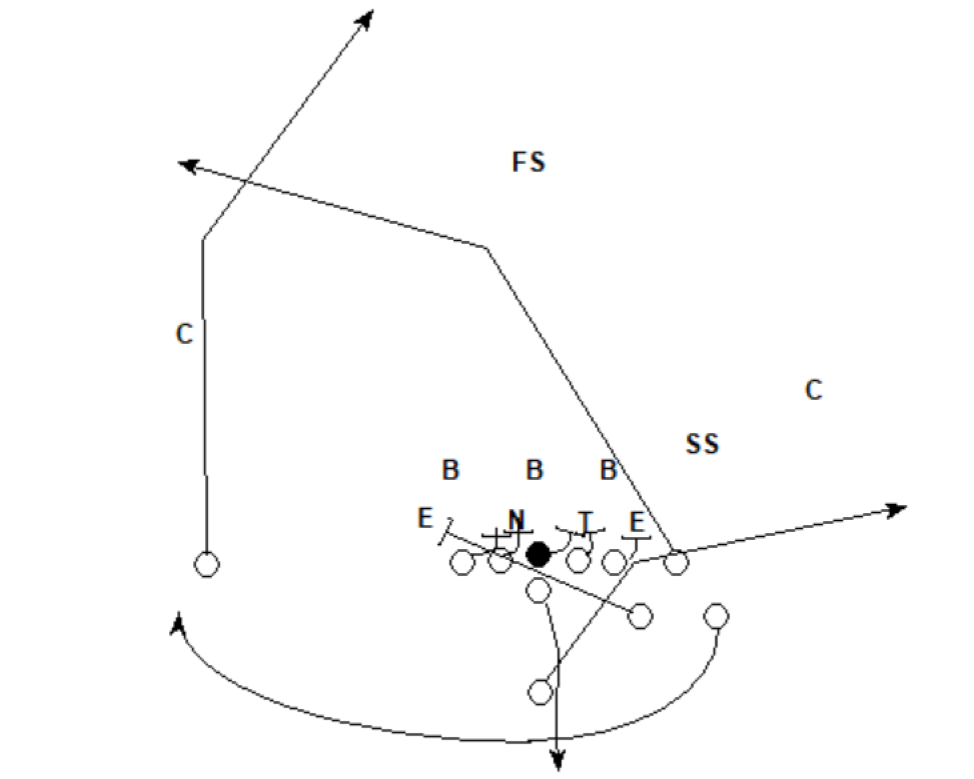 This concept is particularly effective off of this action because the fake end arond pulls defenders towards the flat, which opens up space for the deep cross working behind this area.

With the yankee concept, the offense is trying to place the free safety in a two-on-one bind. This backfield action effectively does this as the free safety is left as the only defender in position to take away the deep cross and doing so would open up the post behind him. Here is a video of the Los Angeles Rams running this play:

After seeing this concept a few times, linebackers will start to drop quickly after seeing the play action in order to take away the deep cross. In response to this, the offense can then throw a slip screen to the running back the other way off of this same backfield action. Here is a diagram of this: 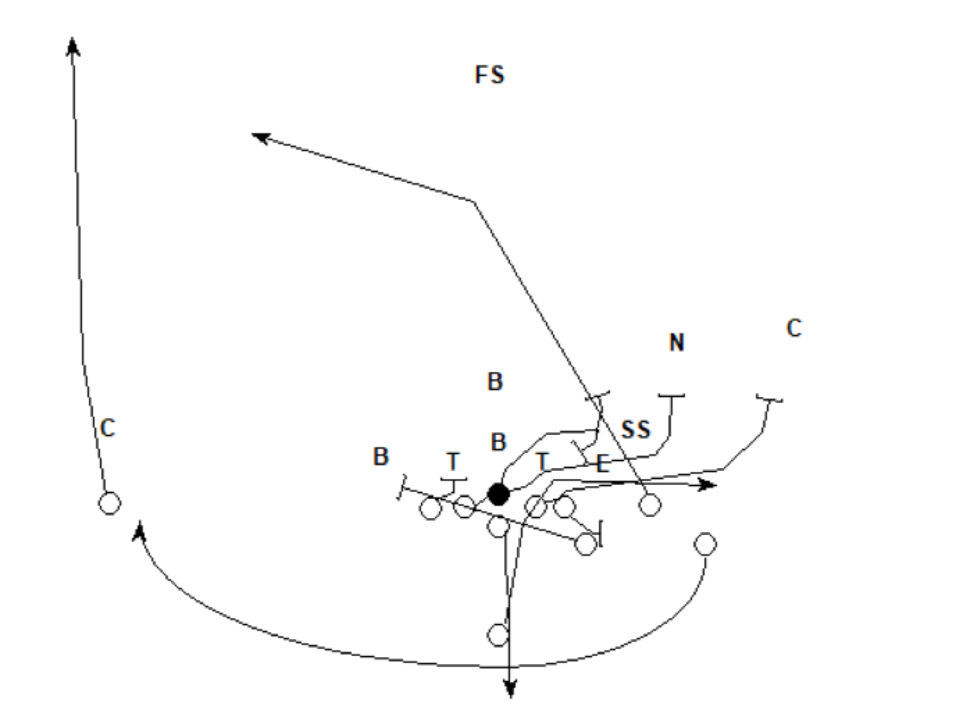 The point receiver at the top of the bunch will still run his deep cross route attempting to pull coverage with him away from the screen. The playside tackle will pass-set the end, while the rest of the line takes their initial zone play action steps. Both guards and the center will then throw any down-lineman down the field and release for the next level to block for the screen. The backside guard will look to peel back and block any defender who recognizes the screen, similarly to an interior lineman on the split zone end around. As was the case with the end around play, if no defender shows, the backside guard will continue up the field to block any defender who shows. Here is a video of the Washington Redskins running this play:

The deep cross takes one defender in man coverage across the field with him. Both the backside outside and inside linebacker start to get a lot of depth getting under the deep cross as they see the play-action pass start to develop. Three interior defenders are in a clear position to hit the quarterback but are held away by the fake end around. This leaves the offense with a ton of space for the running back and his three blockers on the screen play.

Although not a necessary component of this series, there is another gadget-type play the offense can run off of this series. Below is a diagram of this concept: 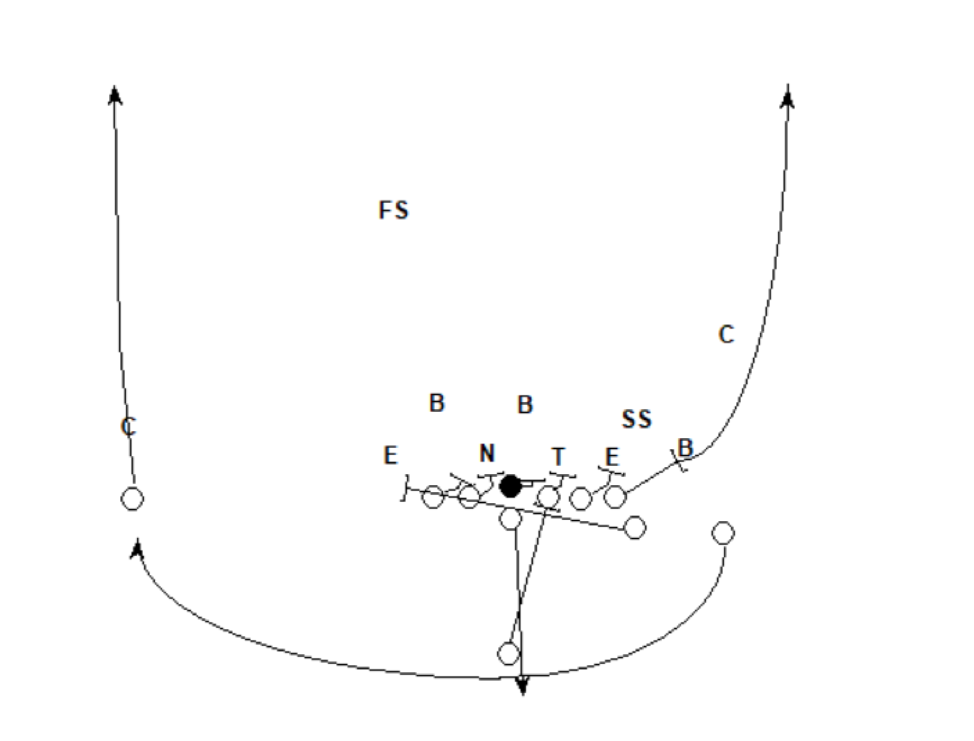 The offense will use the same fake end around play-action scheme as used before with the yankee concept. The only difference here is there will be a tight end on the frontside that engages the defender over him for two counts before shedding him and releasing vertically. This play is especially effective against man coverage as the tight end will be engaging and shedding the defender that is responsible for him in the passing game. Here is a video of this play:

Want more schemes? Create a free trial of Coaching OnDemand and access tons of materials from some of the brightest coaching minds.