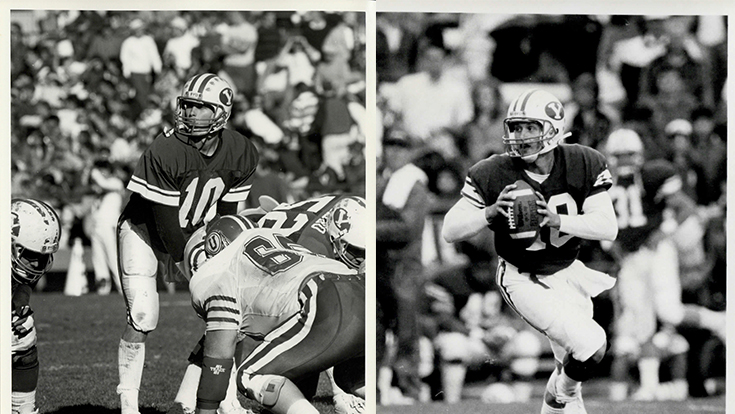 The offices of FranklinCovey Education, at first glance, appear to be light years away from a football gridiron. The company is a leader in the field of K–12 and higher education producing training, coaching, materials and culture-transformation processes to help students succeed. When taken in that context, there are quite a few parallels between this world and football.

For Sean Covey, a multi-time best-selling author and President of FranklinCovey Education, that parallel is easy to define. Growing up in Utah, Covey was a reluctant entrant into the world of football. He started playing in seventh grade at the absolute insistence of his older brother. As part of this same insistence, Covey would go on to become — albeit reluctantly, at first — a starting quarterback.

“My older brother was a receiver and he made me throw him 100 balls a day, so I learned to throw then,” Covey explained. “In practice one day, someone said we needed a quarterback and someone else said, ‘Covey can throw.’ Once they put me in at quarterback, I loved it because I was in charge. Once I started to excel, we started to do well and started winning, so I loved football. Isn’t that amazing how that works?”

Covey’s skill earned him the attention of multiple Division I schools before he ultimately decided to stay home and play at BYU. He earned the starting job his sophomore year with the Cougars and played his entire career under the direction of legendary head coach LaVell Edwards. While at the helm, Covey helped guide his squad to two bowl game appearances and continued the school’s lineage of truly great collegiate quarterbacks.

“I grew up watching Jim McMahon and Steve Young and Marc Wilson and all those incredible quarterbacks, and the opportunity to follow them and play in my home town was too much to pass up,” Covey said. “My claim to fame is that I beat out Ty Detmer. My very first game we played against Air Force who was ranked No. 18 going into that game. I felt like I was going to blow up because I was so nervous. I settled in and played really well, and we won, and that solidified me there as the starter.”

An injury in his junior year ultimately derailed Covey’s football career, but it wasn’t the end of the lessons the game had to teach him. After graduating from BYU, he would earn his MBA from Harvard before entering the business world full time, ultimately rising to his current position.

“One thing I learned is that nothing I do now will ever be worse than having to go through two-a-days,” he said. “But I did learn the principal of ‘game time.’ Sometimes you have to step up and perform. In business, there are often critical moments like when you are giving a speech in front of a big audience or working on a big client and trying to close a sale. Those times you have to rise to the occasion and embrace the challenge. Fear never went away, even after starting 50 games at quarterback, it never left. But you just have to work through it to get the job done.”

His busy schedule now includes travel, speaking engagements and writing in addition to his regular daily duties as corporate president. Time management, discipline and being able to thrive in a diverse culture are all lessons he learned from football. While he is no longer hitting receivers on a deep slant or scrambling for extra yardage on a broken play, Covey is still a leader and will always be a football player.

“The worst thing I could do as a quarterback was predetermine where I wanted to throw,” Covey said. “Coach used to always say that. You have options and you have to read the defense. You want to predetermine because it is easier. I got to the point where I was finally comfortable at doing that. At work, it is the same way. You have a plan, but you have to be willing to audible. Life is fluid and you have to adjust or else you close yourself off to a lot of opportunities.”